An ambitious and tireless worker, Carl Linnaeus revolutionized botany through his introduction of the modern classification system for plants and animals. Linnaeus'ssystem of binomial nomenclature designated a generic name and a specific name for each plant. Linnaeus completed many works on botany and was a popular and inspirational university professor. A confident self-promoter, Linnaeus was also successful in gaining widespread acceptance among the scientific community for his classification system.

Born Carl von Linné on May 23, 1707, in Råshult, a town in the province of Småland, Sweden, Linnaeus developed an interest in plants at an early age. His father, Nils Linnaeus, was a country pastor and avid gardener who introduced the wonders of botany to Linnaeus. At the age of eight Linnaeus was nicknamed “the little botanist.” He entered the Latin School in a nearby city in 1716; there natural history became his favorite subject. Though Lin-naeus was an average student, his enthusiasm for learning about plants was unsurpassed.

In 1727 Linnaeus entered the University of Lund and began medical studies. A year later he transferred to the University of Uppsala to continue his studies. Influenced by the botanist Olof Celsius to pursue botanical studies, Lin-naeus began to investigate the recently proposed theory that plants showed evidence of sexuality. By 1730 Linnaeus had started forming a categorization system based on the stamens Page 457  |  Top of Articleand pistils of plants. Also that year Linnaeus became a lecturer in botany. Two years later he traveled to Lapland to conduct explorations for the Uppsala Academy of Sciences. There he found 100 new species of plants. 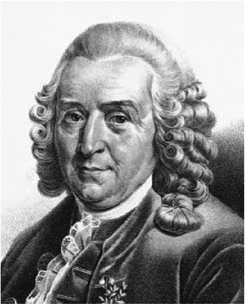 After traveling through parts of Europe from 1733 to 1735, Linnaeus settled in Holland and published The System of Nature, his first major work. In it he presented a systematic arrangement of the animal, plant, and mineral kingdoms. He categorized whales as mammals and acknowledged humans' similarity to apes. Linnaeus also introduced a basic system of plant nomenclature. Flowering plants were separated into classes according to the number of stamens, then subdivided into orders based on the number of pistils. Because this system was based primarily on sexual characteristics of plants, it did not fully express the natural relationships between plants. The system was successful, however, in its simplicity and ease of application, and thus it was widely used. As a result of this work and a number of other publications, Linnaeus had gained a solid reputation.

Linnaeus continued his travels from 1736 to 1738, visiting physicians and botanists around Europe. In 1738 he opened a medical practice in Stockholm. In 1741 he was appointed to the chair of medicine at the University of Uppsala, only to trade it for the chair of botany a year later. Linnaeus devoted himself to teaching and writing, and in 1753 he published his seminal work, Species of Plants, which detailed the system of binomial nomenclature that he had introduced in 1749. The system assigned each plant a Latin or latinized name of two sections: The first name represented the genus, and the second indicated a specific name. For instance, Juglans regia was the name of the English walnut, Juglans referring to walnut and regia specifying that the walnut was the English walnut. Juglans nigra was the black walnut, as nigra means “black.” Until the advent of Linnaeus's system, scientific plant names consisted solely of a Latin description of the plant's distinctive features.

Linnaeus's innovative classification system provided the foundation for modern nomenclature. A popular and captivating instructor, he inspired many of his students to travel around the world in search of plant specimens. Lin-naeus married Sara Moraea in 1739. His manuscripts and collections are preserved by London's Linnaean Society.