Working in her cornfields while other geneticists investigated molecules, Barbara McClintock was ignored for decades because her discoveries ran as counter to the mainstream as did her methods. In the end, however, she proved that, contrary to what almost everyone had thought, genes could move and control other genes. Organisms thus could partly shape their own evolution.

Barbara preferred her own company almost from her birth in Hartford, Connecticut, on June 16, 1902. As a baby she played happily by herself; as a teenager she liked to spend time simply “thinking about things.” She grew up in Brooklyn, then a somewhat rural suburb of New York City, to which her father, a physician for Standard Oil, moved the family when she was six. Her parents, Thomas and Sara McClintock, encouraged independence in their four children by allowing them to skip school.

Barbara became determined to attend college, even though, as she said later, her mother feared that a college education would make her “a strange person, a person that didn't belong to society…. She was even afraid I might become a college professor.” Thomas McClintock took Barbara's side, however, and in 1919 she enrolled in the College of Agriculture at Cornell University, which offered free tuition to New York residents.

McClintock took a course in the relatively new science of genetics in her junior year, and by the time she graduated in 1923 she had decided to make genetics her career. As a graduate student in the university's botany department she studied Indian corn, a type of maize (corn) in which the kernels on each ear have different colors. The color pattern is inherited. 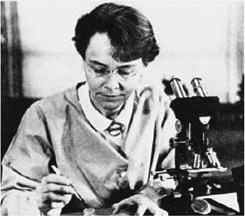 McClintock made her first important discovery while still a graduate student. Geneticists were realizing that inherited traits were determined by information contained in microscopic wormlike bodies called chromosomes. Each cell has a number of pairs of chromosomes, and each pair appears only slightly different from the others.

McClintock was the first to work out a way to tell the 10 pairs of maize chromosomes apart. McClintock earned her M.A. in botany in 1925 and her Ph.D. in 1927, after which Cornell hired her as an instructor. In 1931 she and another scientist, Harriet Creighton, carried out an experiment that firmly linked changes in chromosomes to changes in whole organisms, a link that some geneticists had still doubted. This experiment has been called “one of the truly great experiments of modern biology.”

McClintock was earning a national reputation in genetics, but Cornell refused to promote her because she was a woman. Rather than remain an instructor forever, she resigned shortly after her landmark paper was published. For the next several years she led an academic gypsy life, living on grants and dividing her research time among three universities in different parts of the country. She did her commuting in an old Model A Ford, which she repaired herself whenever it broke down.

In 1936 the University of Missouri at Columbia, one of the institutions at which McClintock had done part-time research, gave her a full-time position as an assistant professor. While there she studied changes in chromosomes and inherited characteristics made by X-rays, which damaged genetic material and greatly increased the number of mutations, or random changes, that occurred in it. This university, too, refused to treat her with the respect she felt she deserved, and she resigned in 1941.

McClintock was unsure what to do next until a friend told her about the genetics laboratory at Cold Spring Harbor, on Long Island. Run by the Carnegie Institution of Washington, which the steel magnate and philanthropist Andrew Carnegie had founded, it had been the first genetics laboratory in the United States. McClintock moved to Cold Spring Harbor in 1942 and remained there the rest of her life.

The discovery in the 1940s that the complex chemical deoxyribonucleic acid (DNA) was the carrier of most genetic information and the working out of DNA's chemical structure and method of reproduction in 1953 revolutionized genetics, turning attention away from whole organisms or even cells and toward molecules. Geneticists saw genes, now shown to be parts of DNA molecules, as unalterable except by chance or the sort of damage that X-rays produced. FRANCIS HARRY COMPTON CRICK, the codiscoverer of DNA's structure, expressed what he called the “central dogma” of the new genetics: “Once ‘information’ has passed into protein [chemicals that carry out cell activities and express characteristics] it cannot get out again.”

Barbara McClintock meanwhile went her own way, working with her unfashionable corn and “letting the material tell” her what was happening in its genes. Contrary to Crick's central dogma, she found genes that apparently could change both their own position on a chromosome and that of certain other genes, even moving from one chromosome to another. This movement, which she called transposition, appeared to be a controlled rather than a random process. Furthermore, if a transposed gene landed next to another gene, it could turn on that gene (make it active, or capable of expressing the characteristic for which it carried the coded information) if it had been off, or vice versa. Genes that could control their own activity and that of other genes had not been recognized before. McClintock suspected that such genes and their movement played a vital part in organisms' development before birth.

Even more remarkable, some controlling genes appeared able to increase the rate at which mutations occurred in the cell. McClintock theorized that these genes might become active when an organism found itself in a stressful environment. Increasing the mutation rate increased the chances of a mutation that would help the organism's offspring survive. If a gene that increased its mutation rate could be turned on by something in the environment, then organisms and their environment could affect their own evolution, something no one had thought possible.

McClintock attempted to explain her findings at genetics meetings in the early 1950s, but her presentations were met with blank stares or even laughter. She offered ample evidence for her claims, but her conclusions were too different from the prevailing view to be accepted. The chilly reception “really knocked” McClintock, as she later told her biographer, Evelyn Fox Keller, and after a while she stopped trying to communicate her research. Most geneticists forgot, or never learned, who she was; one referred to her as “just an old bag who'd been hanging around Cold Spring Harbor for years.” She did not let rejection stop her work, however. “If you know you're right, you don't care,” she said later.

McClintock received a certain measure of recognition in the late 1960s. In 1967, the same year in which she officially retired (in fact, her work schedule continued unchanged), she received the Kimber Genetics Award from the National Academy of Sciences. She was awarded the National Medal of Science in 1970. Only in the late 1970s, however, did other geneticists' work begin to support hers in a major way. Researchers found transposable elements, or “jumping genes” as they became popularly known, in fruit flies and other organisms, including humans. The idea that some genes could control others was also proved.

The trickle of honors became a flood in the late 1970s and early 1980s. McClintock won eight awards in 1981 alone, the three most important of which—the MacArthur Laureate Award, the Lasker Award, and Israel's Wolf Prize—occurred in a single week. Then in October 1983, when she was 81 years old, she learned that she had won the greatest scientific award of all, a Nobel Prize. She was the first woman to win an unshared Nobel Prize in physiology or medicine.

These honors and their attendant publicity irritated McClintock more than they pleased her. She complained, “At my age I should be allowed to … have my fun,” which meant doing her research in peace. McClintock continued to have her scientific “fun” among the corn plants almost until her death on September 2, 1992, just a few months after her 90th birthday.

Some people saw Barbara McClintock's solitary life as lonely and perhaps even sad, but she never viewed it that way. As she said shortly before she died, “I've had such a good time…. I've had a very, very satisfying and interesting life.”