About this Person
Born: May 12, 1820 in Florence, Italy
Died: August 13, 1910 in London, England
Nationality: British
Occupation: Nurse
Other Names: Lady with the Lamp
Full Text:
Page 542

Florence Nightingale is best known as a nurse and a social reformer, though she did significant work as a statistician as well. Her statistical analyses of the phenomena she witnessed as a nurse, charting the death rates that she attributed to unsanitary conditions, led to hospital reforms.

Nightingale was born on May 12, 1820. Although her mother opposed a mathematical education as unnecessary for a future wife and mother, her father, William Nightingale, educated her in this subject that he loved. She was also tutored in mathematics by James Sylvester, who instructed her in arithmetic, geometry, and algebra. Nightingale went on to tutor children in these subjects, using the Socratic method of questioning to spark her students' interest in mathematics. She wove stories around her mathematical lessons, creating word problems out of the situations familiar to her young students. For example, she directed her students' attention to the distance they walked to school each day and then prodded them to extrapolate the distance to the equator based on their daily walk.

In 1854, while working as an unpaid superintendent of a London facility for sick women, Nightingale received a summons from the British secretary of war, Sidney Herbert, recruiting her to aid in the cause of the Crimean War. Along with 38 other nurses, Nightingale traveled to Scutari to administer medical aid to wounded soldiers. However, she not only tended to the sick but also tracked their progress or decline. 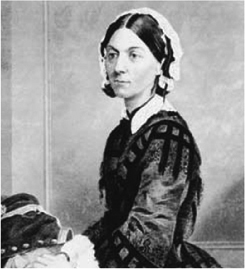 Florence Nightingale, who charted death rates attributed to unsanitary conditions, which led to hospital reforms in New England in the mid-1800s National Library of Medicine, National Institutes of Health

Nightingale firmly believed that social phenomena could be measured objectively and analyzed mathematically, leaving the results open to statistical interpretation. She graphed the statistical data she collected on what she called a “polar-area diagram,” a kind of pie chart representing different causes of death. From her information gathered in Scutari, she prepared charts from different time periods throughout 1854 and 1855 as a means of illustrating the inverse relationship between the level of sanitation and the death rate: As the former rose, the latter diminished. She published her findings, including these polar-area diagrams, in her 1858 book, Notes on Matters Affecting the Health, Efficiency and Hospital Administration of the British Army. Her results left little room for interpretation, as they clearly displayed the efficacy of improved sanitation. In response, Queen Victoria and the Parliament and the British military all agreed to the necessity of reform in the regulation of hospital hygiene.

Nightingale standardized her mode of statistical compilation in the Model Hospital Statistical Form, which was widely adapted to create consistency in statistics. In 1858, the Royal Statistical Society voted her a fellow. During the American Civil War, Nightingale served as a health-care consultant to the United States government. After the war, in 1874, the American Statistical Society inducted Nightingale Page 543  |  Top of Articleas an honorary member. Interestingly, we remember Nightingale in her roles befitting women: as a nurse, as a champion of social causes, as a political activist, and as a supporter of women's equality. We do not remember her in the role that played the key to her significance: as a mathematician and as a statistician, roles more commonly associated with men. After Nightingale died on August 13, 1910, she was remembered by one man, Karl Pearson, as the “prophetess” of applied statistics.