Rosalyn Yalow and her research partner, Solomon Berson, invented a technique called radioimmunoassay that measures substances in body fluids so accurately that reporters 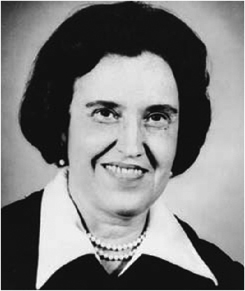 have said it could detect a lump of sugar dropped into Lake Erie. For this advance Yalow won a Nobel Prize in 1977.

Yalow was born Rosalyn Sussman on July 19, 1921, in the South Bronx area of New York City, to Simon and Clara Sussman, who had grown up in the city's immigrant community. Simon Sussman owned a small paper and twine business, which earned just enough money for his family to live on. “If you wanted something, you worked for it,” Yalow recalled.

By the time Rosalyn was eight, she had decided that she was going to be a “big deal” scientist and marry and have a family to boot. She went to Hunter College, which charged no tuition to New York City residents. There her attention turned to physics because, as she says, “In the late thirties … nuclear physics was the most exciting field in the world.” She graduated with high honors in January 1941.

As a Jewish woman with little money Sussman had three strikes against her in trying to gain admission into a graduate school or medical school. At first she thought her only hope was to work as a secretary at Columbia University Medical School, which would allow her to take classes there free. Impending war drained universities of men and created new openings for women, however, and Sussman obtained a teaching assistantship in physics at the University of Illinois in Champaign-Urbana. On her first day of classes in the fall of 1941 she met another Jewish New Yorker, a rabbi's son from Syracuse named Aaron Yalow. They married on June 6, 1943, and later had two children. From the start, Yalow supported his wife's career.

Once the Yalows finished their Ph.D.'s in 1945—Rosalyn was only the second woman to earn a physics doctorate from Illinois—they returned to New York. Rosalyn became an engineer at the Federal Telecommunications Laboratory, the first woman to hold this position; when the laboratory moved away a year later, she began teaching at Hunter. Hunter had no research facilities, however, Page 789  |  Top of Articleand she wanted to do research. Aaron suggested that she look into the new field of medical physics, which focused mostly on radioisotopes, radioactive forms of elements that were usually made in the atom-smasher machines invented during the war.

Rosalyn Yalow consulted Edith Quimby, a pioneer researcher in medical physics at Columbia, and Quimby in turn introduced Yalow to her boss, Gioacchino Failla. On Failla's recommendation the Bronx Veterans Administration (VA) Hospital hired Yalow in December 1947. Her laboratory, one of the first radioisotope laboratories in the United States, was a former janitor's closet, and she had to design and build most of her own equipment. Until 1950 she continued to teach at Hunter.

In the fall of 1950 Yalow found her ideal professional partner in a young physician named Solomon A. Berson. Their collaboration lasted 22 years. One coworker told Sharon McGrayne that Yalow and Berson had “a kind of eerie extrasensory perception. Each knew what the other was thinking…. Each had complete trust and confidence in the other.” In one of their first studies, published in 1956, Yalow and Berson used radioisotope tagging to show that the immune systems of diabetics, who must have daily injections of the hormone insulin to make up for their body's lack of it, formed substances called antibodies in response to the insulin they took, which was from cows or pigs and thus was slightly different from human insulin.

This finding was startling enough—researchers had believed that insulin molecules were too small to produce such a response—but more importantly, Berson and Yalow realized that they could turn their discovery on its head to create a very sensitive way of measuring insulin or almost any other biological substance in body fluids. They injected the substance they wanted to test for into laboratory animals, making the animals produce antibodies to it. They then mixed a known amount of these antibodies with a known amount of the radioactively tagged substance and a sample of the fluid to be tested.

Antibodies attach to molecules of the substance that caused their formation. The nonradioactive substance in the sample attached to some of the antibodies, preventing the radioactive substance from doing so. After a certain amount of time Yalow and Berson measured the radioactive material not attached to the antibodies. The more substance had been in the sample, the more radioactive material would be left over. This test, the radioimmuno-assay, can detect as little as a billionth of a gram of material. In 1978 Current Biography Yearbook called it “one of the most important postwar applications of basic research to clinical medicine.”

Yalow accumulated many honors for her work, including the American Medical Association's Scientific Achievement Award and election to the National Academy of Sciences in 1975. In 1976 she became the first woman to win the Albert Lasker Basic Medical Research Award, often considered a prelude to a Nobel Prize in physiology or medicine. A year later she finally won the “Big One”—the Nobel Prize itself. It was the first time that the surviving member of a partnership was honored for work done by both. (She shared the prize with two other researchers who had made discoveries about hormones in the brain.) Yalow was the second woman (after GERTY THERESA RAD-NITZCORI) to win a Nobel Prize in physiology or medicine and the first American-born woman to win any science Nobel Prize. In 1988 she also won the National Medal of Science, the highest science award in the United States.

Yalow retired in 1991, but in 1998 she was still working at her office at the Veterans Administration Hospital and doing some research, although her health had begun to fail. During the 1990s she gave many lectures on such subjects as nuclear power, which she feels is unjustly feared; the need for better science education in the United States; and the need for more women scientists. “The world cannot afford the loss of the talents of half its people,” she said in her Nobel Prize acceptance speech.