Name given to a monotheistic religion that began in ancient Southwest Asia about 1800 B.C.E., and its adherents. The word Jew is derived from the name of the ancient Hebrew Kingdom of Judah, which existed from the tenth to the sixth centuries B.C.E.

According to the Hebrew Bible, scriptures referred to by Christians as the Old Testament, the roots of Judaism lie in the ancient Mesopotamian city of Ur, in what is now Iraq. A citizen of Ur named Abraham is considered the first Jew because he was the first person to submit to the will of the Hebrew god, Yahweh. According to the book of Genesis, Yahweh established a covenant, or agreement, with Abraham which promised that Abraham and his descendents would prosper as long as they kept faith with Yahweh.

At Yahweh's direction, Abraham moved his people to Canaan, a region lying along the eastern shore of the Mediterranean Sea. In the eighteenth century B.C.E., Jews migrated from Canaan into Egypt. The Bible records that the Egyptians eventually turned against and enslaved the Jews. According to the book of Exodus, Yahweh sent a series of plagues upon Egypt that convinced the Egyptian pharaoh to allow the Jews to leave Egypt to seek a land of their own. Historians and archaeologists debate the accuracy of the biblical account, noting that no evidence of such a large-scale migration appears in either Egyptian histories or the archaeological record.

Regardless of the historical accuracy of the account, Jews regard the exodus as a key moment in their history. Led by a lawgiver and prophet named Moses, the Jews are said to have wandered in the Sinai Desert for 40 years in search of a new home. While on this journey, Moses is reported to have received from Yahweh the Ten Commandments, which form the basic moral and religious obligations for Jews. Around 1200 B.C.E., the nomadic Jews reentered Canaan. They encountered many smaller groups, but there was no major power in the region to keep the Jews from claiming some of the land.

The Jews were organized into 12 independent tribes that formed a loose confederation, or military alliance, for mutual protection. Around 1024 B.C.E., the Jews united under the first king of ancient Israel, Saul, who secured the borders of the new kingdom. Saul is said to have been succeeded by his son-in-law, David (r. ca. 1000–ca. 961 B.C.E.). Although David is one of the best-known figures in the Bible, there is debate as to whether he existed. The biblical David is given credit for expanding the borders of Israel and for building Jerusalem into an important capital. The third Jewish king, Solomon (r. ca. 970–ca. 930 B.C.E.), built the First Temple in Jerusalem and attempted to form the Jews into a unified people by breaking the old bonds of tribal allegiance. This meant breaking the authority of the tribal leaders, who resisted Solomon's polices.

Following Solomon's death, 10 of the tribes broke away and formed the Northern Kingdom of Israel. They rejected a strong centralized government, which left them vulnerable to attack. In the eighth century B.C.E., the Assyrians began a conquest of each of the tribes, and by 722 B.C.E. all of Northern Israel had fallen.

The remaining tribes of Judah and Benjamin, which together formed the southern Kingdom of Judah, held off the Assyrians but were conquered by the Babylonian Empire in 586 B.C.E. When the Jews refused to worship Babylonian gods, the Babylonians destroyed Solomon's temple, burned Jerusalem, and forcibly deported 10,000 prominent Jews to distant parts of the Babylonian Empire. This exile of Jews is known as the Babylonian Diaspora.

In 539 B.C.E., the Persians conquered the Babylonians and the following year they allowed the exiled Jews to return to Judah. The Persians, who were more tolerant than their predecessors, permitted the practice of Judaism and the rebuilding of the Temple in Jerusalem. In 330 B.C.E., the Persian Empire fell to the Macedonian king Alexander III, the Great (r. 336–323 B.C.E.), and Judah became part of the Hellenistic world. Alexander's empire crumbled soon after his death, and the Jews came under the control of the Seleucid Empire that subsequently arose in Babylon. In 165 B.C.E., a Jewish group named the Maccabees led a successful revolt against the Seleucids and established an independent Kingdom of Judah. The Jewish holiday of Hanukkah celebrates this

The Roman Empire conquered the Maccabees’ kingdom in 63 B.C.E. but had great difficulty maintaining order. Judah's population resisted Roman occupation, staging three large-scale revolts against Roman rule. The last of these resulted in the Roman devastation of Judah in C.E. 135 and the expulsion of large numbers of Jews from the region. This forced a centuries-long dispersal of Jews called the Diaspora, sending them to other regions of the Near East and Europe. This dispersal ended only with the establishment of the modern-day state of Israel in 1948. 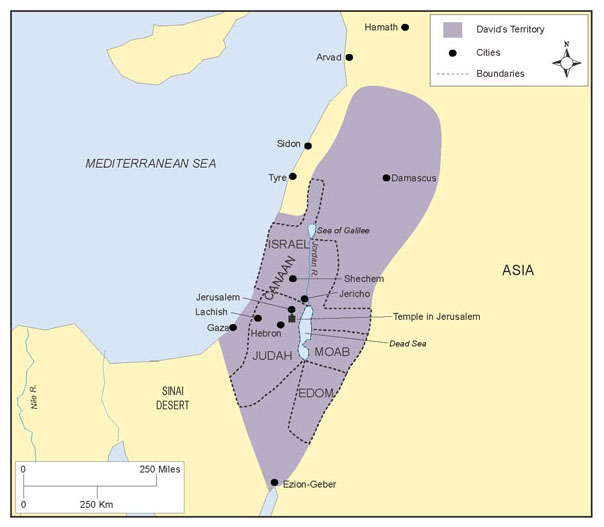 David, the second king of ancient Judah and Israel, revered by Jews, Christians, and Muslims alike, unified the 12 ancient Israelite tribes to form a powerful kingdom.

The first five books of the Jewish scriptures comprise the Torah, the most sacred of Jewish texts. The Torah lays out Jewish religious law and describes acceptable social and dietary practices. The rest of the Hebrew Bible consists of books of wisdom, history, prophecy, law, and psalms. These writings constitute a history of the Jewish people and explain what God expects from them in terms of moral and ethical behavior. Jewish law is meant to provide moral and ethical guidelines for how to act toward God and toward other humans. It is concerned primarily with human relationships, not with property rights, and states that all humans regardless of sex or race are to be treated with respect, dignity, and equality.

The Jewish ideals of respect and dignity for humankind, monotheism, individual responsibility, and expectations of moral and ethical behavior influenced other religions in ancient Southwest Asia. Other faiths that arose in the region claim kinship with Judaism, preserving many of the same principles and revering many of the same figures. Christianity, for example, began as a sect of Judaism and maintained its concept of the human relationship with God and the individual's responsibility to take morally right actions. Islam is also tightly interwoven with Judaism's early history. Muslims believe that the prophet Mohammed was a direct descendant of Abraham through his son Ishmael, and they too accept Moses as a prophet.