One of the largest empires of the ancient world, based in what is now Iran and extending from Asia Minor (modern-day Turkey) to the Persian Gulf and the Indus River. The Achaemenid dynasty, which ruled over this empire, established a culture that differed significantly from the Mesopotamian empires that previously had dominated Southwest Asia and the Near East.

Growth of the Empire

King Achaemenes founded the first Persian state in central Iran around 700 B.C.E. At this time, the Persians were subjects of the kingdom of Media, to whom they paid tribute. Within 50 years, the Persians had moved to southern Iran, where they split into two separate kingdoms. In 550 B.C.E., Cyrus II, the Great (r. ca. 559–ca. 530 B.C.E.), united these two Persian states and defeated the Medes to establish an independent Persian kingdom. He subsequently conquered the kingdom of Lydia in Asia Minor (modern-day Turkey) and expanded his empire into southern Mesopotamia.

In 539 B.C.E., Cyrus captured the city of Babylon, toppling the Neo-Babylonian Empire and setting the tone for Achaemenid political administration over the next 200 years. He issued a proclamation promising not to destroy the local culture or institutions, nor to terrorize the citizens. This policy stood in stark contrast to those of the Assyrians and Babylonians, who forcefully subjugated conquered peoples and repressed local cultures. The following year, Cyrus reinforced his reputation for religious tolerance by ending the so-called Babylonian Exile. In ca. 586 B.C.E., the Babylonians expelled the Jews from Jerusalem and destroyed the Jewish temple because the Jews refused to worship Babylonian gods. Almost 50 years later, Cyrus allowed the Jews to return home and

rebuild the temple. Cyrus's expansive treatment of the Jews, then a relatively insignificant tribal people unrelated to the Persians, was extraordinary for its day.

Darius I, the Great (r. 522–486 B.C.E.), followed Cambyses on the throne and conquered lands all the way to the Caucasus and northward into modern-day Armenia. Under Darius, the Persian Empire grew to include the Sudan, Egypt's Nile Valley, Lydia, Babylon, all of Anatolia (modern-day Turkey), Thrace (in what is now Bulgaria), the Caucasus, Afghanistan, parts of Central Asia, and northern India. This far-flung empire, comprising a wide diversity of cultures, dominated the ancient world but proved a challenge to rule. 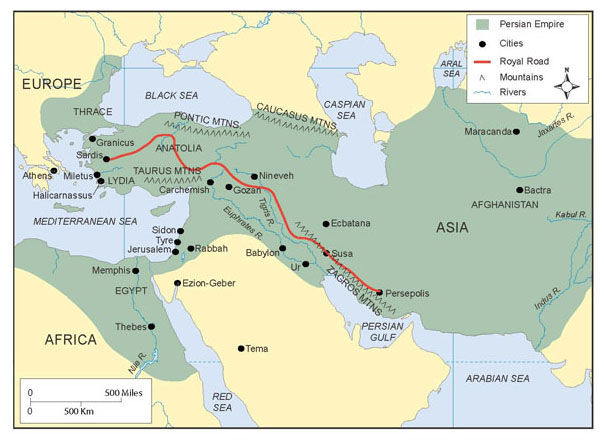 In 525 B.C.E., when the Persian King Cambyses II conquered Egypt, the Persian Empire became the largest in history to that time. It stretched from the Mediterranean coast in the west to India in the east.

To maintain effective control over their empire, the Persians divided it into administrative satrapies, or provinces, each of which was organized by ethnic identity and often had a small Persian population present. A governor called a satrap ruled each province as a virtual client king, exercising almost unlimited authority to collect taxes, enforce laws, act as the supreme judge, and control all political appointments. In times of unrest, the satrap also served as commander in chief of the local army district. Despite their broad powers, satraps ruled in the name of the Persian emperor and were subject to close oversight by a royal secretary, a council of Persian advisors, and an official known as “the eye of the king,” who made an annual inspection of each province.

The system of satrapies traced its roots to the Persians’ former overlords, the Medes. Although Cyrus overthrew

Median domination, he retained their basic administrative organization, applying it to his earliest conquests. Darius expanded and refined the system, creating 23 satrapies throughout the empire (some divided into sub-units for easier administration) and standardizing the amount of tribute collected by each satrap. The system allowed for local rule of subject peoples while allowing the emperor to retain close central control of affairs in distant corners of the empire.

Another significant challenge facing the Persians was facilitating travel and communication across a vast land empire. Darius responded by building the Royal Road, a major thoroughfare that allowed the Persians to deliver messages quickly and to move troops where and when they were needed. The road ran 1,677 miles (2,698 km) from the eastern capital of Susa (in modern-day Iran), to the primary capital of Persepolis, to the city of Sardis in modern-day Turkey. It was dotted with 111 transfer stations where riders could change horses, rest, and eat. A royal courier could travel the entire road in seven days. Many historians consider the Persian couriers to be the world's first postal system.

The Royal Road was just one of the steps Darius took to promote trade and commerce. He standardized weights and measures throughout the empire and introduced a gold coin of standard weight, the Daric. He also sent exploratory expeditions up the Kabul and Indus rivers and into the Indian Ocean in search of new trading markets. Darius even ordered construction of a 125-mile-long (200-km) canal to connect the Mediterranean and Red seas. This provided a continuous water connection between Persian territories in Egypt and the eastern lands of the empire, greatly facilitating trade.

From the beginning of the Persian empire, its policies regarding captured lands were tolerant and fair, and the government respected the diversity of the people living in the empire. These policies were heavily influenced by Zoroastrianism, a monotheistic religion whose basic tenets included fair and equitable treatment of all individuals and respect for all living creatures. Cyrus's proclamation of mercy on capturing Babylon is preserved in a cuneiform inscription on an artifact known as the Cyrus Cylinder, an ancient large clay cylinder covered with writing. It describes Cyrus’ defeat of Babylon and states that he returned the images or statues of various Babylonian gods to their temples. Under Darius, the empire also adopted a no slavery policy; all of the workers who built government projects under Darius were paid for their labor.

At its height under Darius, Persia was the unchallenged master of Southwest Asia and the Near East, the largest empire the ancient world had seen to that date. The massive Persian army, and the relative ease with which the Persians dispatched and then assimilated their enemies, earned them the fear and respect of neighboring cultures. However, even the Persians were forced to deal with local uprisings. In the late sixth century B.C.E., Ionian Greeks in western Asia Minor rebelled against the Persian presence in their homeland. The Ionians appealed to other Greeks for assistance, and the Greek city-state of Athens came to their aid. This led to the Persian Wars (ca. 499–479 B.C.E.), fought between Persia and a coalition of Greek city-states. Both Darius and his successor, Xerxes I (r. 486–465 B.C.E.), underestimated the organization of the Greeks. Greek victories at the battles of Marathon (490 B.C.E.), Salamis (480 B.C.E), and Plataea (479 B.C.E.) ended the Persian invasion.

The Persians got their revenge against the Greeks during the Peloponnesian Wars (431–404 B.C.E.), which pitted the Athenian Empire against a coalition of city-states led by Sparta. The Persians supported the Spartans, whose defeat of Athens ended the Athenian Empire. This opened Greece up to invasion by the Macedonian king Philip II (r. 359–336 B.C.E.), who conquered most of the peninsula.

Following Philip's death, his son, Alexander III, the Great (r. 336–323 B.C.E.), took the throne. Alexander, who aspired to be the master of the ancient world, decided to lead an expedition against Persia, the greatest power of the day. Alexander invaded Persia in 334 B.C.E., sweeping his opponents before him and conquering great swaths of Persian territory. In 330 B.C.E., he defeated the Persian army and killed King Darius III (r. 335–330 B.C.E), proclaiming himself the new king of Persia. Alexander died just seven years later, however, and the empire he had fashioned quickly broke apart. His trusted commander, Seleucus I Nicator (358–281 B.C.E.) subsequently seized

Briant, Pierre. From Cyrus to Alexander: A History of the Persian Empire. Winona Lake, IN: Eisenbrauns, 2002.