Ancient seafaring people who lived along the east coast of the Mediterranean and who emerged as a dominant trading power in the region after 1200 B.C.E. The Phoenicians are best remembered for their major contribution to human culture—the invention of the world's first phonetic alphabet.

The origins of the Phoenicians are unclear, and most of what is known about them comes from external sources, particularly the writings of the Greek historian Herodotus (484–425 B.C.E.). The Phoenicians may have migrated from the Persian Gulf area around 3000 B.C.E. before settling along the coast of the eastern Mediterranean Sea in the region of Canaan, in modern-day Lebanon. During the second millennium B.C.E., this land was controlled by Egypt, Hittites from Asia Minor (modern-day Turkey), and Assyrians from eastern Mesopotamia. As the power of these groups in the region faded beginning the thirteenth century B.C.E., the Phoenicians rose in influence.

Phoenician trade prospered for two reasons. First, the majority of the goods they traded were items that brought high profits. These included cedar and pine timber, fine linen, embroidered cloth, wine, gold and silver jewelry, carved ivory from Africa, and glassware. Their most famous product was cloth colored with a purple dye made from snails that lived only along the shores of the Eastern Mediterranean. Second, the Phoenicians participated in transit trade, charging a fee to transport goods from other countries to overseas markets where they were in demand. By 1200 B.C.E., the Phoenicians had established a number of independent port cities, the most

important of which were Sidon and Tyre, located in what is now Lebanon.

To further their control over the Mediterranean Sea trade, and to keep their competitors from building up their own trading networks, the Phoenicians founded colonies along the coast of North Africa and on islands of the Mediterranean Sea including Cyprus, Corsica, and Sardinia. Chief among these was the colony of Carthage, founded in 814 B.C.E. in what is now Libya. Carthage eventually became a significant military power in its own right. The Phoenician trading network extended as far west as the Iberian Peninsula (modern-day Spain and Portugal). The Phoenicians controlled not only trade within the Mediterranean, but also the flow of goods such as silk and porcelain pottery from Asia, which entered the region exclusively through Phoenician ports.

Each Phoenician city-state was ruled by a king who governed the city and the countryside around it. He was advised by two groups: the priests and a council of elders, drawn from the upper classes. Since seaborne trade was critical to the economic success of each city, each new Phoenician settlement was built around a harbor and port. Near the harbor area was a market. These markets met the needs of the local population for food, clothing, and luxury goods imported from Asia and different places in the Mediterranean world. Each city was divided into sections in which different trades were located and was fortified by defensive walls.

Early Phoenician traders used the ancient Mesopotamian writing system called cuneiform to record their business transactions. However, cuneiform was cumbersome because it required a working knowledge of 500 to 1,000 symbols, each of which represented a unique word or idea. Between 1400 and 1200 B.C.E., the Phoenicians developed a much simpler form of writing to manage their growing trade. The Phoenician writing system was made up of 22 letters, each of which stood for a unique spoken sound. It was easy to learn and could be used to record any spoken language.

The new alphabet was eventually adopted by other peoples, who recognized its superiority over cuneiform and other writing systems based on pictographs, such as Egyptian hieroglyphics. The Greeks adopted the Phoenician alphabet around 800 B.C.E.; later, the Romans and other cultures in the region adapted it to their own languages.

The Phoenician alphabet was derived from an earlier form of writing called Proto-Sinaitic script, which arose in the Sinai, a desert region in what is now southern Israel, around 1700 B.C.E. At that time, Semitic-speaking peoples under Egyptian rule inhabited this area. These people adapted existing Egyptian hieroglyphs to create their own written language. The pronunciation of each letter was based on the shape of the hieroglyph chosen. For example, the hieroglyphic symbol for a house represented the sound “b,” because the word for house in their spoken language was beth.

The Phoenician alphabet, a more stylized and linear version of Proto-Sinaitic, was one of several scripts that sprung from Proto-Sinaitic. Around 1300 B.C.E., a separate branch of the script that began to evolve in the Arabian Peninsula became the South Arabian script. Merchants carried this system of writing across the Red Sea to East Africa, where it eventually became the Ethiopic script, which is still used today.

Proto-Sinaitic, and most of the scripts that developed directly from it, do not include symbols for vowel sounds. When the Greeks adopted the Phoenician script around 800 B.C.E., it included four symbols for sounds not found in spoken Greek. The Greeks used these symbols to represent vowel sounds, which the Romans subsequently adopted for use in the modern, or Latin, alphabet. Similarly, the principal change that occurred in the transition from South Arabic to Ethiopic was the addition of marks to certain consonant symbols to indicate vowel sounds. Today most of the peoples of the Western world and Middle East write in an alphabet directly or indirectly based on that of the Phoenicians. 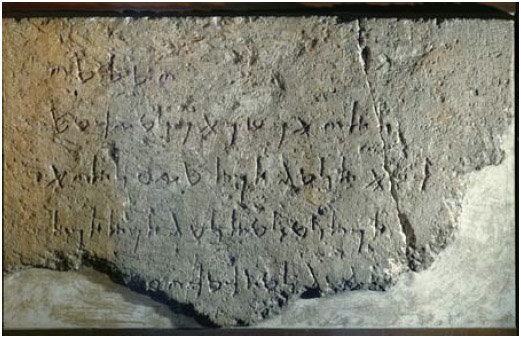 This fragment of a Phoenician inscription from the Eshmun Temple in Sidon was found in modern Lebanon. In about 1200 B.C.E., the Phoenicians developed a simple alphabetic script for use in managing their commercial trading empire. The new alphabet, which spread throughout the Near East and Southwest Asia and was later adopted by the Greeks, forms the basis of the modern alphabet used throughout the Western world. (Erich Lessing/Art Resource, NY)

The Phoenician trade empire flourished for some 400 years, but political developments in the region led to its gradual demise. In the ninth century B.C.E., the Assyrian Empire in northern Mesopotamia began to expand west toward the Mediterranean. One by one, the Phoenician cities along the coast fell. Only Tyre remained free, largely due to its defensive fleet. By the eighth century B.C.E., the Greeks had expanded their own trade activities and captured markets in the Aegean and Mediterranean seas formerly dominated by the Phoenicians.

The Persians conquered the remaining Phoenician city-states by 538 B.C.E. Phoenicia slowly declined as a commercial center under the Persians, a land-based empire that had little naval or maritime tradition. The city of Sidon did prosper under the Persians, but that was because it was used as a launching point for Persian invasions of Egypt and Greece. Alexander III, the Great (r. 336–323 B.C.E.), who invaded Phoenicia in 333 B.C.E., was more interested in promoting Greek commercial trade, and Phoenicia's importance as a trading center declined rapidly thereafter. Carthage alone continued to prosper until it was defeated by Rome in the Second Punic War (218–202 B.C.E.) and destroyed by Rome in the Third Punic War (149–146 B.C.E.).