Akkadian king who established one of the world's earliest and most influential empires in Southwest Asia during the twenty-fourth and twenty-third centuries B.C.E. Starting from his home city-state of Akkad, in what is now central Iraq, Sargon united virtually all of Mesopotamia—a region stretching from Asia Minor to the Persian Gulf—under his rule. Sargon's conquests and trading initiatives spread his native Akkadian culture throughout the region and as far as modern-day Syria and Turkey. Later Mesopotamian civilizations drew heavily upon these Akkadian cultural and social models. The Assyrians, who established a later kingdom based in what is now northern Iraq, even claimed Sargon as an ancestor of their own kings. 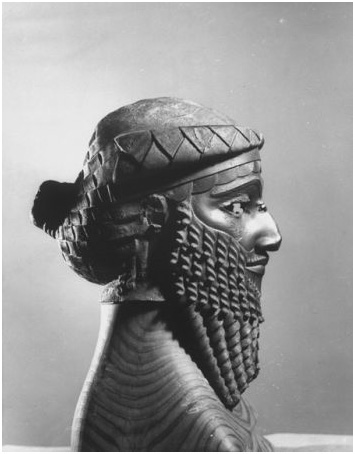 This bronze bust of Sargon of Akkad was discovered in the city of Nineveh, in present-day Iraq. Archaeologists believe it dates from about 2250 B.C.E. (Frank Scherschel/Stringer/Time & Life Pictures/Getty Images)

Historians have established fairly precise dates for Sargon's reign (ca. 2334–2279 B.C.E.), but no solid evidence of his birth or early life exists. Because he enjoyed such an extraordinarily long reign—56 years at a time and place where life expectancy was perhaps the mid-30s—he probably came to the throne at a relatively young age.

The earliest lists of Assyrian kings show “Sargon the Akkadian” as a son of the first Assyrian king, Ikunum. The Assyrian king lists, however, offer no dates for the rulers in what is called the “Early Period.” Existing portions of a document from Sumer, the southernmost portion of Mesopotamia, claim that Sargon's father was named La'ibum, but tell nothing more about him. The document, the “Sargon Legend,” survives only in scattered fragments, so many holes in its story remain unfilled.

The other surviving portions of the manuscript state that Ur-Zababa, the king of the central Mesopotamian city-state Kish, appointed Sargon as his cupbearer. Sargon must have been a young man by this time, since the cupbearer had the enormous responsibility of ensuring that the king was not poisoned. The cupbearer often wielded great influence because of his close and trusted relationship with the king. Ur-Zababa, however, had a disturbing dream in which the goddess Inanna granted favors to Sargon and drowned the king. Ur-Zababa took this as an omen that Sargon represented a threat to his throne and his life.

The king secretly ordered his chief metalsmith, Belic-tikal, to kill Sargon, then sent Sargon on a false errand to the smith's shop. Before Sargon entered the gates of the smith's shop, however, Inanna sent him a warning to stop because Belic-tikal was “polluted by blood.” Still unaware that Ur-Zababa had ordered his execution, Sargon

returned to the king's chambers. Seeing Sargon still alive startled and frightened Ur-Zababa, who then sent Sargon on another false mission, this time to carry a sealed message to Lugalzagezi, the king of the nearby city-state of Uruk. The message instructed Lugalzagezi to kill Sargon. The remainder of the story no longer survives, but it presumably tells how Sargon escaped his fate at the hands of Lugalzagezi, toppled Ur-Zababa, and became king of Kish and Akkad.

A later Assyrian text, from the seventh century B.C.E., offers a slightly different account of Sargon's birth and rise to power. According to this source, Sargon was the son of a priestess in an unnamed Mesopotamian village but never knew his father's identity. After giving birth to Sargon, his mother placed him in a reed basket and sealed its lid with a tarlike substance called bitumen. She then set the basket adrift on the Euphrates River. A gardener named Akki discovered the basket and raised Sargon as his own child. Sargon, although poor and unknown, eventually managed to rise to the position of cupbearer to the king of Kish, Ur-Zababa.

In the Assyrian narrative, King Lugalzagezi of Uruk deposed Ur-Zababa, and Sargon raised an army to avenge the king's murder. By defeating Lugalzagezi, who had conquered most of the city-states of Sumer, Sargon established himself as ruler over all of Sumer. In the story, Sargon states, “Ishtar granted me her love and… I exercised kingship.” Ishtar is the Assyrian name for the goddess Inanna, whose intervention figured significantly in the Sargon legend as well. Both tales portray Sargon as enjoying the favor of Inanna, the most important goddess in the Mesopotamian pantheon. Inanna's apparent blessing further reinforced Sargon's claim to be the rightful ruler.

The details of Sargon's rise to kingship are lost in legend, but his actions after taking power are well documented. Clay tablets from the time preserve records of Sargon's military campaigns, as well as the political and religious systems he established in Akkadian society.

Sargon's first recorded action was to subjugate the Sumerians, a southern Mesopotamian people who spoke a different language from the Akkadians. At the time, King Lugalzagezi of Uruk controlled most of Sumer, having conquered the strongest city-states in the region. Sargon marched on Uruk in about 2335 B.C.E., capturing the city with little resistance and destroying its renowned defensive walls. Meanwhile, Lugalzagezi had joined forces with his vassal kings throughout Sumer to oppose Sargon's army. The Akkadians defeated the Sumerians in two decisive battles, captured Lugalzagezi, and swept south as far as the Persian Gulf. According to Sumerian sources, Sargon symbolized his conquest of Sumer by washing his hands in the sea when he reached the Persian Gulf.

Sargon next turned his attention north, to the natural resources of what are now Turkey and Lebanon. Although agriculture thrived in Mesopotamia, the region lacked native sources of timber and metal ores needed for tools, weapons, and ornamentation. The nearest sources of these commodities were the cedar forests of coastal Lebanon and the Taurus Mountains of southern Turkey, known then as the “Silver Mountains.” To secure access to them, Sargon conquered a string of city-states in northern Mesopotamia stretching as far as modern-day Lebanon and Syria. His conquests included the important trading cities of Mari, in what is now northwest Iraq, and Ebla, in modern-day Syria.

Under Sargon, Akkad also established trading contacts to the south via the Persian Gulf. Ancient inscriptions mention ships arriving at Akkadian ports from as far away as Oman, a country on the southern Arabian Peninsula. At its height, Sargon's empire stretched from the Persian Gulf to the Mediterranean Sea, and included parts of what are now Iraq, Iran, Syria, Lebanon, Turkey, and Israel.

After conquering Sumer, Sargon set out to eradicate the former Sumerian forms of government. He made the conquered city-states of Sumer into provinces and appointed Akkadian officials to serve as governors. Sargon appointed his sons, Rimush and Manishtushu, as provincial governors, and married their daughters to vassal kings

to strengthen the kings’ loyalties to Akkad. He declared Akkadian to be the official language of the empire, adapting the cuneiform script originally invented by the Sumerians to the Akkadian language. Akkadian cuneiform eventually became the common language of Mesopotamia, and most Mesopotamian cultures used some variant of the script until about the eighth century B.C.E.

Despite his desire to sweep away all traces of Sumerian administration, Sargon embraced Sumerian religious traditions. He also assumed titles that honored Sumerian gods, such as “great ensi of Enlil,” which meant that he was the great chief priest of the Sumerians’ highest diety Enlil. He chose his daughter, Enheduanna, to serve as high priestess of the Sumerian moon god in the southern city-state of Ur.

Sargon was also responsible for improving the Akkadians’ irrigation systems. Agriculture in Akkad relied heavily on irrigation, as rainfall seems to have been less than 0.8 inches (20 millimeters) per year.

Some ancient sources report that Sargon extended his campaigns of conquest well into Asia Minor—modern Turkey—and beyond. The ancient text titled “Epic of the King of Battle” claims that Sargon invaded central Asia Minor to protect Akkadian merchants from heavy taxation by a local king. The same document states that Sargon's forces reached the island of Cyprus, then called Kuppara. Sargon's death triggered a widespread revolt against Akkadian rule, but his successors managed to hold the empire together for another 100 years.

Sargon is perhaps the most influential figure in the first thousand years of Western history. Although one or two early Sumerian kings imposed control over several city-states, none of the previous “empires” compared in scope or complexity to that of Akkad. Sargon's empire was the first truly international state, uniting peoples of diverse languages and cultures under a single ruler. Not until the Babylonian king Hammurabi in the eighteenth century B.C.E. would one individual have such a significant impact on Western society. The later Babylonian and Assyrian empires, which dominated the region for nearly 1,500 years, adopted the systems of writing, government, and religion that Sargon spread throughout his empire centuries before. Under Sargon, the Akkadian culture established the earliest foundations of Western civilization.

Words from Their Time

The tale of Sargon's birth and youth is told on three surviving parts of a Sumerian stone tablet. The first surviving segment identifies Sargon's father as La'ibum. After a gap in the text, the story tells of Ur-Zababa, king of Kish, who appoints Sargon as his cupbearer. Ur-Zababa then shares with Sargon his dreams, which involve the goddess Inanna and Ur-Zababa's drowning. Frightened, Ur-Zababa orders Belic-tikal to kill Sargon, but Inana (Inanna) prevents it. Ur-Zababa then sends Sargon to Uruk's King Lugal-Zage-Si (Lugalzagezi) with a message to slay Sargon. At this point, the legend breaks off. Historians believe that the lost segments describe how Sargon became king. The excerpt below is a translation of a segment of the Sargon legend.

To… the sanctuary like a cargo-ship; to… its great furnaces; to see that its canals… waters of joy, to see that the hoes till the arable tracts and that… the fields; to turn the house of Kic, which was like a haunted town, into a living settlement again—its king, shepherd Ur-Zababa, rose like Utu over the house of Kic. An and Enlil, however, authoritatively [?] decided [?] by their holy command to alter his term of reigning and to remove the prosperity of the palace.

Then Sargon—his city was the city of…, his father was La'ibum, his mother…, Sargon… with happy heart. Since he was born… unknown number of lines missing