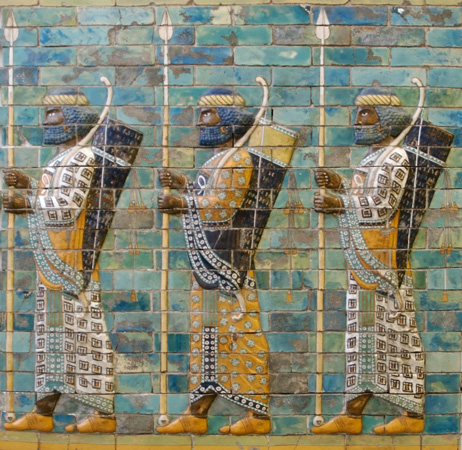 Assyria was an ancient kingdom in Mesopotamia, the land between the Tigris and Euphrates rivers. The Sumerians were the first to settled here. The Assyrians were arrived about 1,000 years later. They settled to the north. Babylon was to the south.

The Assyrians built their first city on the banks of the Tigris River in what is now the country of Iraq. They named it Assur after their chief god. For hundreds of years, they fought with their neighbors and added land to their territory. Assyria became rich and powerful.

The Assyrian capital city was Nineveh. The city was located on the Tigris River north of Babylon. The walls of Nineveh stretched for more than 3 miles (4.8 kilometers) along the river. Within the city walls there were many beautiful buildings and temples. Nineveh was one of the world’s greatest cities in ancient times.

The Assyrians had the most powerful army in Mesopotamia. They were the first to use iron-tipped spears and arrows. They made war chariots and protective armor. They used battering rams to knock down the walls of the cities they attacked.

By 650 BCE they had conquered a vast empire. It stretched between the Persian Gulf, the Red Sea, the Mediterranean Sea, the Black Sea, and the Caspian Sea.

The Assyrians earned a reputation of extreme cruelty among the people they conquered. Often they burned the cities and tortured their enemies.

Great Assyrian kings include Sargon II, who ruled around 700 BCE, and Sennacherib, who ruled after Sargon II. Ashur-Bani-Pal was king from 668 to 625 BCE. He built the first-known library. More than 20,000 clay tablets have been found among its ruins.