Persia was a mighty kingdom centered in what is now Iran. The Persians rose to power in about 550 bc. For about 200 years they ruled a vast empire. It stretched from the Indus River in southern Asia to parts of southern Europe and northern Africa. 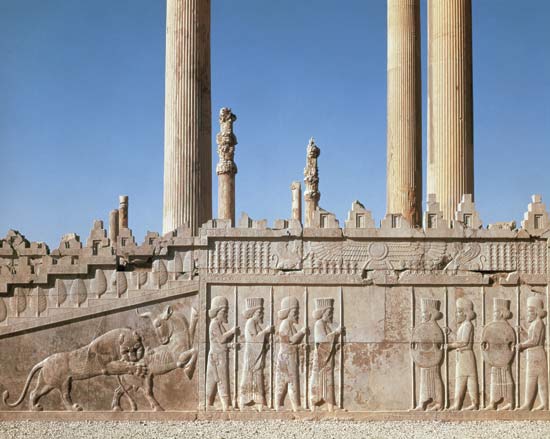 Persian kings built a hall called the Apadana in the city of Persepolis about 2,500 years ago. A stairway still stands. Carvings on it show a lion attacking a bull. Gianni Dagli Orti/Corbis

After the fall of the empire, a number of peoples ruled Persia. The present-day country of Iran had its beginnings in the early 1500s. But the outside world called it Persia until 1935.

In about 550 bc Cyrus II became king of Persia. Over the next 40 years the Persians brought one region after another under their control. Persian kings treated the groups they conquered with fairness and respect. They allowed conquered peoples to follow their local customs.

In 522 bc Darius I became king. During his rule the Persian Empire grew to its greatest size and power. The empire was divided into 20 provinces. A governor ruled each of the provinces. The governors enjoyed a great deal of freedom in ruling. However, military forces in each province kept the governors from becoming too strong. Persian kings also used spies to keep track of the governors’ activities.

The Persians built a series of roads to increase communication and business activity throughout the empire. The most famous road was the Royal Road. The Royal Road stretched more than 1,500 miles (2,400 kilometers) west from the Persian capital of Susa.

In about 500 bc the Persian Empire slowly began to weaken. It suffered military defeats and rebellion. In the 300s bc a kingdom known as Macedonia had come to power in Greece. By 330 bc the Macedonian ruler Alexander the Great had conquered the Persians.

Persians known as the Parthians and the Sasanians ruled Persia from about 247 bc until the ad 600s. At that time Muslim Arabs invaded. The Persians became Muslims but kept their own language, which is called Farsi or Persian. A ruling family from Persia called the Safavids regained control in the early 1500s. They called their country Iran.