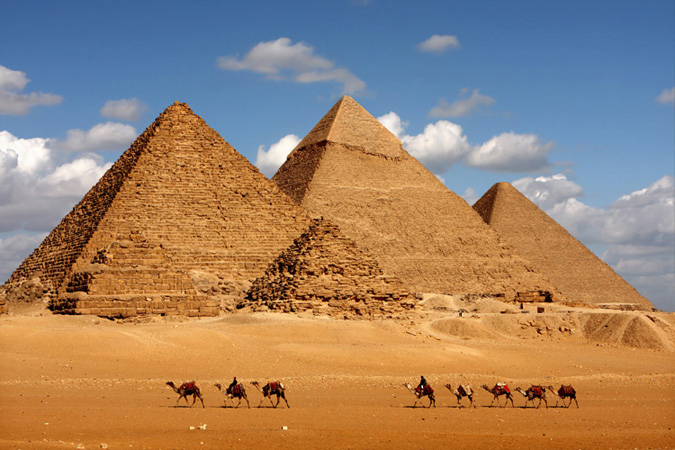 Ancient Egypt was divided into two regions: Upper Egypt in the south and Lower Egypt in the north. But from around 3050 BCE, one king, called the pharaoh, led both regions. Then in 525 BCE, outsiders conquered Egypt. Foreigners ruled Egypt for many years after this.

Historians divide Egypt’s early history into three main periods: the Old Kingdom, the Middle Kingdom, and the New Kingdom. During these periods, the Egyptians ruled their own country. Sometimes, though, the ruling dynasty collapsed. (A dynasty is a series of rulers from the same family.) Then others took control of Egypt.

The size of Ancient Egypt changed, too. It was once only a narrow strip of land along the Nile. But then it expanded to include land on both sides of the river. Sometimes it also included land that was farther away.

Records of the Past

Archeologists have learned about Ancient Egypt from the items they discovered inside burial tombs. The Ancient Egyptians believed that people could take their belongings with them into the afterlife. So they buried people with everything they thought they might need.

The Ancient Egyptians painted pictures and words on the walls of these tombs. This has helped archeologists learn more about them.

The gods played an important role in the daily life of Ancient Egyptians. They thought their pharaoh was a god. They believed their pharaoh made the sun rise and the crops grow. They did not think they could exist without him.

Under the pharaoh were the viziers (va-zeers). They had many responsibilities. They oversaw the government and the building of the pyramids. They collected taxes and kept records.

Below the viziers were nobles, priests, craftspeople, miners, and farmers. A part of everyone’s income went to the pharaoh and his staff.

Most people spent a great deal of time preparing for the afterlife. As soon as a pharaoh became king, he began constructing his tomb. Those who could afford it also prepared their tombs. Many craftspeople used their skills to decorate their tombs and to create objects to put in them.

The Ancient Egyptians believed their bodies had to be preserved after they died. This was the only way they could live again in the afterlife. So those who could afford it had their bodies turned into mummies.

To make a mummy, they first removed the organs. Then they packed the body with a type of salt. This dried it out. Lastly, they wrapped the body in linen strips. They included magical charms to keep the body safe.

The Ancient Egyptians believed the road to the afterlife was dangerous and scary. The dead had to travel through a dark underworld. This world was filled with snakes, monsters, and lakes of fire.

They placed Books of the Dead in burial tombs. These books contained spells to protect the person so he or she could make it safety to the afterlife.

The Ancient Egyptians had a system of writing called hieroglyphics. It consisted of picture symbols.

At first, historians could not read it. But the discovery of the Rosetta Stone in 1799 CE changed this. This stone had writing in three languages, including Greek and hieroglyphics.

Historians could understand the Greek writing. They used it to figure out the meaning of the hieroglyphics. After this, they learned a great deal about Ancient Egypt.