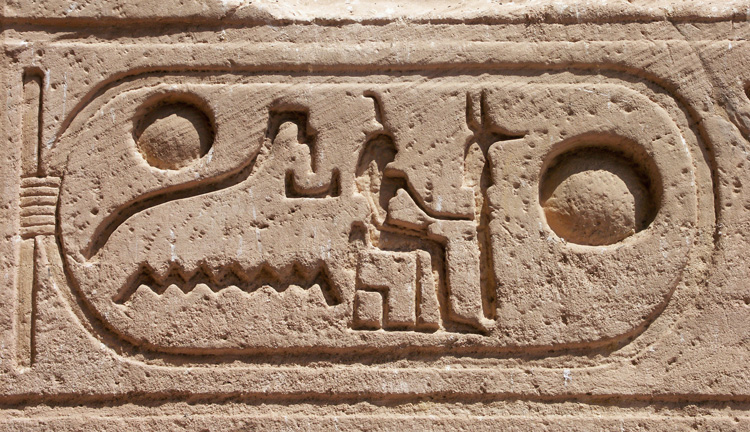 An Egyptian cartouche. This one contains the name of Ramses the Great. Vladimir Korostyshevskiy/Shutterstock.com.

The ancient Egyptians first began writing around 3200 or 3300 BCE. At first, they used picture symbols, or hieroglyphs, but later they imitated the Greek alphabet. As their writing changed, even the Egyptians themselves forgot what the hieroglyphs meant.

The discovery of the Rosetta Stone in 1799 allowed scholars to translate this ancient writing. Once experts had this key, they could read the words carved on coffins, tombs, and temples. Much of what people know about early Egypt comes from studying these hieroglyphics.

Several other countries developed picture-writing before Egypt. One was Sumer in Mesopotamia. Some historians think Egyptians may have copied Sumerian writing. Others are not sure this is true.

When the Egyptians began writing, they used pictures they called medu netjer. This means “words of gods.” Later the Greeks called these symbols hieroglyphics, or “sacred carvings.” They thought the writing was sacred or holy because they saw it on temple walls and ceilings.

Writing in hieroglyphs was difficult. Egyptians needed hundreds of different symbols to tell a story or write a message. Because this writing was so hard to learn, few people learned to read or write.

Only certain people called scribes took the time to master hieroglyphics. They spent long hours in school to learn each symbol. Then they read and carved important messages in stone. Their skills were important to the whole community.

Some hieroglyphs represent the sounds in a word. These work like the English alphabet, where each letter represents a different sound. Others stand for a group of sounds. What made hieroglyphics tricky to learn is that some pictures also represent words or ideas.

At times scribes added extra symbols to explain words. In addition, they treated their work as art. Sometimes that meant rearranging the letters so they looked more beautiful. And everyone did not spell the words the same way. This made hieroglyphics even harder to read.

Certain pictures or symbols could also be numbers. One finger pointing up meant 10,000. If the finger pointed down, it meant 100,000.

To show fractions, scribes used the Eye of Horus. This picture of an eye with falcon markings came from Horus, the Egyptian god with a falcon’s head. Different parts of the eye equaled different fractions. The eyebrow meant one-eighth. The lower edge of the eye near the nose was one-half, and the pupil was one-quarter.

Names of rulers were often written in a frame shaped like a rectangle or oval called a cartouche. That made it look as if they had circled the name to show its importance. Sometimes the name of an Egyptian god is found inside a cartouche, but that is rarer.

Originally Egyptians carved hieroglyphs into stone. Later they wrote them on papyrus, a type of paper made from the papyrus plant. Because writing with ink was a much faster process, they changed some of the symbols to make them flow more easily.

These new forms of writing were called hieratic and demotic. Priests used hieratic, which means “holy,” but common people used demotic, which means “of the people.” Even after they began writing on papyrus, Egyptians still recorded some of their hieroglyphs in stone.

But in 332 BCE, the Greeks conquered Egypt. After that, hieroglyphic writing died out as the Egyptians began to write more like the Greeks. Soon no one remembered what the symbols stood for. Hieroglyphics remained a mystery for about two thousand years.

In 1799 a French soldier discovered the Rosetta Stone among some Egyptian ruins. This large stone had three different kinds of writing—hieroglyphic, demotic, and Greek. By comparing the three languages, the riddle of hieroglyphic meanings was finally solved. Since scholars knew what the Greek words meant, they knew that the corresponding hieroglyphic and demotic symbols meant the same thing.

A French scholar named Jean-François Champollion figured out their meanings. Historians could then translate hieroglyphs in tombs and temples. Reading these ancient symbols helped them learn many things about ancient Egyptian customs and lifestyles.