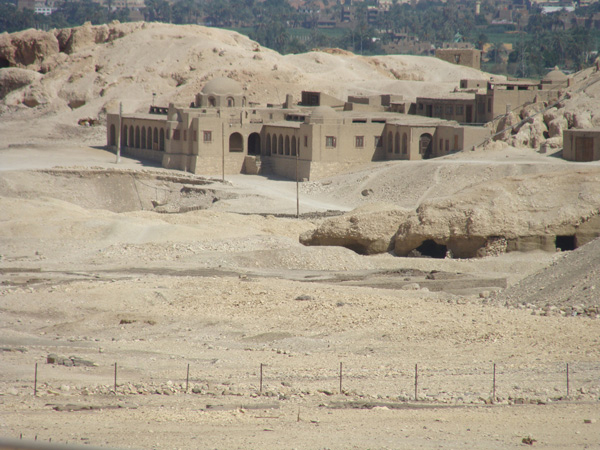 Daily life in ancient Egypt was tied to the rise and fall of the Nile River. The new year began when the Nile River flooded. This season, called Akhet, started with five days of celebrations and rituals that honored the birthdays of the gods. From June/July to September/October, people sailed on the floodwaters and fished.

In mid-October the floodwaters drew back again. During this season, called Proyet, farmers planted their seeds in the damp, soft soil. They tended their growing crops until Shomu, the dry season that began in February. Then the crops were harvested and stored.

Mud from the Nile together with straw and pebbles were used to make sun-baked bricks for building houses. Homes had small windows to help it stay cool inside. Outside stairs went to the roof, where families slept in the summer. Egyptians plastered their walls and then painted them inside using designs from nature.

Ordinary houses had a living room with a low platform for sleeping and eating. A room or two separated it from the kitchen. The kitchen might have a roof of branches to let out smoke. Most people cooked on their roofs, though.

Wealthy people had large homes with many rooms. Some even had pools and indoor bathrooms. The bathrooms were tiled, and limestone toilet seats were set over a pot of sand.

Most homes had little furniture. Everyone, even the pharaoh (king), sat on stools. A few people had carved chairs. Beds slanted from the headboard down to the footboard and had wooden headrests rather than pillows. Pottery bowls filled with oil were lit as lamps.

Boys became men by age 15, and they married a few years after that. Most girls were married by age 12 or 13. Parents arranged some marriages. Other couples fell in love. Divorce and remarriage were common.

Egyptians did not live long. An average lifespan for men was 35; for women it was 30. Children, too, often died young.

Parents were thankful when their children lived, so they let them play and enjoy childhood. As they grew older, children helped with chores and babysat the younger children.

Many toys have been found in tombs, including mechanical toys that moved. Other popular toys were tops, dolls, puppets, boats, and carved animals. Children often kept pets, such as cats, birds, or gazelles. Some people even had tamed cheetahs for pets.

Most women wore long linen tunics, and men wore pleated kilts. Rich women had pleated cloaks. Children often went naked, but around age 10, they began to dress like their parents. Bare feet were common, although some people wore sandals of papyrus or leather.

Women’s hairstyles varied—long and straight, braided, curled, or tall and puffy. Many even shaved their heads. It kept them cool and got rid of head lice.

Baldness or shaved heads were not a problem, because most people wore wigs. Even men and children wore wigs. Children often had their heads shaved except for one strip of hair that hung down on the side, called a sidelock. Both men and women shaved or plucked off all their body hair.

Makeup, perfume, and ointments were popular. Women painted their cheeks and lips with red ocher, a mineral. They softened their skin with creams made from the fat of crocodiles, hippos, or cats. They tied cones of perfumed fat on their heads, which scented their hair as it melted.

Eye makeup in green and black was made from crushed minerals. Men, women, and children all wore eye makeup. Men and boys also wore jewelry and earrings. Many people wore armbands and necklaces that looked like large collars.

People believed the pharaoh as a god-king. They believed he made the sun rise and the crops grow. It was his job to keep order. The Egyptians had many gods and rituals that were part of their life. Food and other offerings were given to the gods.

Many people spent a lot of time preparing for death and the afterlife. If they could afford it, they would have a tomb built and have the walls painted. Many people were also employed in building and decorating the pharaoh’s tomb. Artists, sculptors, carpenters, and other craftspeople spent much of their time making grave goods or decorating tombs.