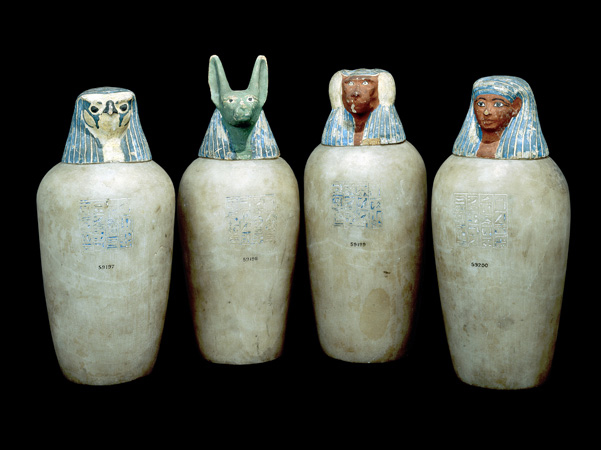 Canopic jars. During the process of mummification, the body’s organs were placed in these jars, which were then stored in the person’s tomb. © The Trustees of the British Museum. Reproduced by permission.

The afterlife was very important to the ancient Egyptians. They believed that the body needed to be kept in one piece so the soul could return to it after death. So they preserved their dead as mummies.

Egypt’s hot, dry climate was perfect for preserving bodies. Before the Old Kingdom began, people buried their dead in shallow graves in the desert sand. (The Old Kingdom was the first of three main periods in ancient Egyptian history.) The climate dried out the bodies and they did not fall apart.

Later the wealthy were buried in stone tombs. They made simple mummies by removing some internal organs and wrapping the body in linen. They put the body in a stone coffin called a sarcophagus or in a wooden coffin.

During the Fourth Dynasty, they stored the removed organs in covered jars called canopic jars. By the time of the New Kingdom, mummification had become a specialized process accompanied by rituals. The priests who performed the process worked outside of town in a building called the Beautiful House.

A priest wearing a mask of Anubis, the jackal-headed god of the dead, led the preparations. The body was laid on a narrow table. Then the priest pulled the brain out through the nose. The Egyptians thought the brain was an unimportant organ.

Next the masked priest drew a line where the body would be cut. A person came in with a special knife and made a single cut. Anyone who destroyed an Egyptians’ body was considered evil, so the priests would curse the cutter and chase him out.

The priest took out the internal organs, but left the heart in the chest. The priests washed the body with wine, rubbed it with oils and spices, and said prayers.

Next they filled the body with spices and natron, a type of salt. Salt dries out the body by absorbing moisture. It also prevents bodies from decaying.

The priests also covered the outside of the body and the organs with natron. The drying process took about 40 days. After the body was completely dried, the organs were placed in canopic jars.

Each canopic jar had the head of a god carved on it to protect that organ. The gods whose heads appeared on the jars were:

The canopic jars were stored in the tomb with the body. Sometimes they were placed inside a canopic chest.

Next the priests stuffed the body with spices and linen to fill the cavities where the organs had been. Then they sewed up the cut. Next they rubbed the body with cedar oil and put white stones or onions in the eye sockets.

They wrapped the body in strips of linen. Sometimes the wrappings came from the person’s clothes being torn into long strips. Other times old sheets, used temple cloth, or even an old sail were used. In later years cloth was specially woven for burials. It took about 150 yards (137 meters) of linen.

The wrapping of the mummy was done in a special order that began with the head. Each limb was wrapped separately, and then after each body part had been wrapped, the whole mummy was wrapped from head to toe. Then it was covered with resin, a sticky sap from trees that hardened as it dried.

As the priests wrapped the mummy they placed amulets, or magic charms, in between the layers. These were to protect and strengthen the body in the afterlife. A funeral mask that looked like the dead person might be placed over the face. This was to help the spirits recognize the body.

The priests placed the body in a decorated case. This, too, might have the face of the dead person painted on it. Spells and paintings decorated the case. Several cases might be used.

A huge funeral procession, with paid mourners dressed in blue, followed the mummy as oxen dragged it on a wooden barge to the tomb. Tomb walls were decorated with paintings and hieroglyphics, a type of writing using picture symbols.

A priest prayed and touched the mummy’s mouth. This ceremony was called “Opening of the Mouth.” It allowed the dead person to eat and speak in the next life.

The tomb was filled with tools, furniture, food, weapons, jewelry, and musical instruments. Sometimes animals were mummified with their owners. Small statues called shabtis were put there, too. They were supposed to respond to the person’s every wish in the afterlife. Now that the dead person was a mummy, the Egyptians believed that his or her spirit could now return to the body.