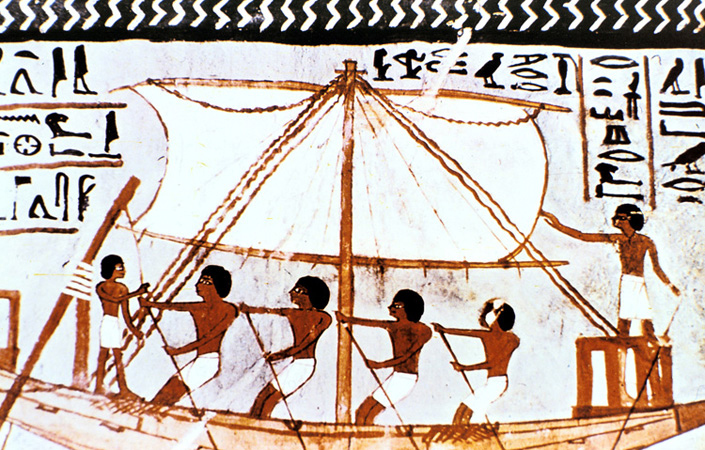 An Egyptian wall painting of a boat on the Nile River. Egyptians sailed to other lands to trade goods. © The Print Collector/PhotoLibrary.

In Ancient Egypt, the pharaoh (king) owned all of the land and everything it produced. Under the pharaoh’s rule, the nobles controlled most of the country’s power and wealth. These upper classes lived in great luxury, supported by the taxes paid by the common workers and farmers.

Below the noble class were the artisans, or skilled workers. They worked as carpenters, sculptors, painters, bricklayers, weavers, boat builders, chariot builders, or held other jobs that required special training. Many used their skills to prepare the royal tombs.

Most of the people, though, made their living as farmers or other laborers. Below the peasants were slaves. Some had been taken as prisoners of war; others were Egyptians. Most people had slaves, even if they were not rich.

Although slaves could be bought, sold, and passed down to heirs, they did have rights. They could own property and marry freeborn people. And their children could go to school. Some rose in the government that way.

A woman’s status depended on her husband’s. Some women worked with their husbands in bakeries, mills, or breweries. Others ran businesses while their husbands were away. Women also worked as weavers, beauticians, florists, boat pilots, perfumers, musicians, and doctors.

Women in Egyptian society had more freedom and financial independence than females in most other nations at that time. For example, when women married, they brought one-third of the property to the marriage. If the couple got divorced, the wife still had her own property.

The Egyptians did not use money. People traded for what they wanted. If they could not find someone to trade with, they had their goods weighed. This determined how much the goods were worth.

The weights they used were called deben, and each weighed about 3 ounces (85 grams). Later, smaller measurements were adopted. Ten kite equaled one deben. Some common prices were one deben for sandals, three for a goat, and five for a tunic or a pig.

Workers were usually paid in grain, bread, and oil. A day’s pay might be ten loaves of bread and a jug of beer. Or a month’s wages might be about five or six sacks of grain. Managers might get seven or eight. The king’s messenger might also get meat, wine, fish, and vegetables.

After workers received their pay, they traded at the marketplace for other goods they needed. But Egyptians did not only trade with each other. Records from 3800 BCE show that they traded with other countries, too. Gold, gemstones, barley, wheat, and papyrus were their main exports.

Egyptians went to Palestine and possibly as far as Ethiopia. They also sailed to Punt on the east coast of Africa. Historians think the Egyptians took their ships apart and carried them to the Red Sea. Then they put them together on the shore.

Camel caravans also traveled to and from Egypt. The Nubians to the south brought ebony, ivory, spices, leopard skins, ostrich feathers, and cattle. From the Middle East the Egyptians received silver, iron, cedar logs, and horses. All goods that came into Egypt were considered a tribute to the pharaoh.

The Egyptians themselves also paid tribute to the pharaoh. Having no money meant that people paid taxes in goods rather than cash. Viziers or other officials came around before the harvest and measured the crops. They then decided how much food each person owed the king.

Everyone had to pay taxes except officials. But if a farmer’s crop had been eaten by a swarm of locusts or trampled by a hippopotamus, the tax could be forgiven. The most common goods farmers sent the pharaoh were grain, oil, flax, honey, and leather.

Some taxes went to the temples. These were used to pay skilled laborers and the upper classes. The temple also kept and distributed the seed for the fields.

The deserts of Egypt provided gold, copper, lead, flint, and gemstones. They also yielded stone for building—limestone, sandstone, granite, and basalt—and decorative stone, such as alabaster, porphyry, and carnelian. These natural resources as well as the mineral-rich soil of the Nile floodplains gave Egypt many economic advantages.