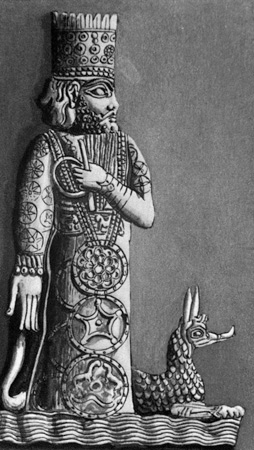 Babylon was the name of a city and a region in ancient Mesopotamia. The Sumerians arrived in Mesopotamia around 5000 BCE. At first they were farmers. Around 3000 BCE the Sumerians began to form large city-states along the Tigris and Euphrates rivers. (A city-state is an independent state consisting of a city and its surrounding territory.) Eventually the separate Sumerian city-states were united and called Babylon, or Babylonia.

The City and Its Laws

In approximately 1780 BCE, King Hammurabi (died 1750 BCE) established the city of Babylon as the political and commercial center of Mesopotamia. Marduk, the god of thunderstorms, was the chief god of Babylon. The massive city gates were designed with dragons and bulls in honor of Marduk.

Hammurabi brought stability to the region and had a code of law written down. These laws applied equally to everyone in the kingdom. They were placed in public places so everyone would know what they were.

The courts of Babylon were in charge of administering justice. Each court had one to four judges. Punishment varied from capital punishment and mutilation to flogging and banishment.

Most Splendid City in the World

The Babylonians were impressive builders. Ancient Greek historian Herodotus (c.484–c.425 BCE) describes Babylon as the most splendid city in the known world. It was impressive for both for its size and its beauty. Babylon’s outer walls were 56 miles (90 kilometers) in length, 80 feet (20 meters) thick, and 320 feet (98 meters) high.

A 300-foot (91-meter) ziggurat (temple) loomed over the city. It was built in honor of the god Marduk and could be seen from miles away across the wide plain. During Hammurabi’s reign, trade thrived. Babylonian trading caravans traveled far and wide.

The Babylonians used lumps of silver for money. They kept business records on cuneiform tablets. Many visitors traveled to Babylon to buy gold, jewelry, fruits and vegetables, clothing, date wine, and other goods, such as slaves.

Thousands of people lived inside the city. There were large inns for travelers, taverns for food and drink, and prisons for those who broke the law. There were skilled laborers, bankers, carpenters, rope makers, stone and brick masons, potters, and even sailors, who manned the boats on the rivers.

Several hundred years after the death of Hammurabi, the warlike Assyrians burned the city of Babylon to the ground. With their strong armies, they conquered and ruled the entire Mesopotamian region. Because of their cruel and unfair treatment of other peoples, they were despised throughout the region.

In 612 BCE, a desert tribe known as the Chaldeans formed an alliance with the Medes to overthrow the Assyrians, bringing their empire to an end. The Chaldean king Nebuchadnezzar (c. 630–562 BCE) restored the city of Babylon to its former glory. He reigned for 43 years.

Nebuchadnezzar built the Hanging Gardens of Babylon. It was an engineering marvel, built like a stadium with garden terraces and waterfalls tumbling from one level to the next. Nebuchadnezzar also had the massive ziggurat dedicated to Marduk rebuilt.

The Babylonians studied the moon, the sun, and the stars. They came up with the idea of seven days in a week, naming one day for the sun, one for the moon, and the other five for the planets they knew about. King Nabonidus was the last ruler of Babylon before it was conquered by Cyrus, the king of Persia in 539 BCE.