What's growing on your stethoscope? (And what you can do about it) Alcohol-based foam can do double duty, cleansing hands and stethoscope heads with a single scrub

Background Studies have shown that rubbing alcohol pads on stethoscope diaphragms can reduce bacterial colonization, but alcohol pads are used infrequently used and not always available.

Results We analyzed a total of 184 cultures (from 92 stethoscopes). Both the mean (28 prewash vs 3 post-wash, P=.001) and median (11 prewash vs 1 post-wash, P=.001) colony counts were significantly greater before being cleansed. Three methicillin-resistant Staphylococcus aureus (MRSA) colonies were identified in the prewash period; all were destroyed by the foam. The estimated number of hand washes needed to prevent 1 MRSA colony is 31 (95% confidence interval [CI], 18-89).

More than 160 years after a Hungarian physician introduced a protocol of strict handwashing and instrument sterilization to hospital wards, (1) many clinicians still don't wash their hands regularly or properly sterilize their medical equipment. (2,3) The lack of stringent infection control, both in inpatient and office settings, is exacerbated by the rise in antibiotic-resistant bacteria. Methicillin-resistant Staphylococcus aureus (MRSA), in particular, including community-acquired MRSA, accounts for infections ranging from severe skin lesions to sepsis, and an estimated 18,650 deaths annually. (4,5)

Waterless hand cleansers, such as alcohol-based foams and gels, improve handwashing compliance. (6-8) These products are effective in reducing both bacterial and viral agents, are convenient to use, and may even be good for caregivers' skin. (9) But would they work on stethoscopes? Our study was designed to find out.

* An often-neglected source of bacteria

Infection can spread from patient to patient, not only on hands, but also via fomites such as ventilators, computer keyboards, pagers, and stethoscopes. (10-14) Antimicrobial stethoscope covers, including those impregnated with silver ions, do not decrease bacterial colonization; evidence suggests that their use may actually increase it. (15) Studies indicate that rubbing alcohol pads on stethoscope diaphragms can reduce bacterial colonization, and it has been suggested that cleansing of stethoscopes daily may be as effective as more frequent cleaning. (16) Unfortunately, many clinicians do not clean their stethoscopes on a regular basis. (17) In addition, alcohol pads are not always available, and using them requires an extra step and produces waste.

An earlier study by a member of our research team (A.S., unpublished data, 2007) indicated that rubbing stethoscopes exposed to nonpathogenic Staphylococcus epidermidis with alcohol-based hand foam was comparable to using alcohol wipes in reducing bacterial counts. The primary objective of this study was to determine whether clinicians can simultaneously reduce bacteria on stethoscope heads and clean their hands with alcohol-based foam.

This study was a prospective, single-blinded, "before-and-after" trial--a design in which each participant served as his or her own control and used foam that was already available on site. The study was conducted at 1 community-based hospital and 1 satellite family health center; the study was approved by the hospital Institutional Review Board. A grant from St. Margaret's Foundation covered the cost of the agar plates.

We began by asking the attending physicians, faculty, nurses, residents, and medical students who attended a grand rounds program to participate; we visited the satellite health facility to recruit participants, as well. We started with 93 participants, but 1 stethoscope was damaged during the study, so we ended up with 92 participants and 184 cultures.

We did not tell participants how to wash their hands or for how long. We simply told them to cleanse their hands as they normally would and to rub the foam onto the stethoscope head, as well.

Prior to data collection, randomly assigned ID numbers were recorded on the bottom of 200 agar plates, which were then placed in a box. One member of our research team gave each clinician 2 plates. Participants imprinted their stethoscope head onto the first plate and handed it to another investigator, who recorded the prewash ID numbers. Participants then performed the handwashing and stethoscope rub and repeated the imprinting procedure with the second plate. This time, the investigator recorded the professional role of each participant (eg, resident, attending, nurse, faculty) as well as the post-wash ID numbers.

After 48 hours at 35[degrees]C incubation, the plates were arranged in numerical order. A member of the research team then counted the number and identified the type of bacterial colonies on each plate and recorded the findings on a data sheet by ID number.

In order to validate the bacterial counts, the supervisor of the hospital laboratory--who had 20 years' experience in examining cultures and served as the gold standard--independently examined a random sample of plates. We agreed in advance that any count that deviated by more than 7 (approximately half the effect the study was powered to detect) from the gold standard would require another investigator to intervene. This proved unnecessary as no such deviation was found.

Coagulase studies were performed on all plates with bacterial isolates, and gram staining was performed on selected plates, along with identification of gram-negative stains, using the Microscan (Siemens, New York, NY). An "honest broker"--the only person authorized to match the plates with the stethoscopes' ID numbers--then matched the prewash and post-wash data by stethoscope and type of health care provider. Another investigator analyzed the final data sheet for accuracy.

A pilot study was performed to obtain estimates of the average and variance of the bacterial counts in a control group of stethoscopes and to determine whether the act of imprinting the stethoscope itself would significantly reduce the colony counts. The results established that there was no statistical change in either the summary statistics or the distribution of the bacterial counts over the course of multiple imprinting.

Estimates obtained from the pilot study indicated that 58 stethoscopes would be sufficient to yield 80% power (alpha=0.05, 2-tailed) for detecting an average difference of 15 colony counts between the prewash and post-wash samples. Seventy-eight stethoscopes would increase the power to 90%. We ultimately tested 92 stethoscopes.

Descriptive statistical measures were calculated to examine the bacterial counts. Linear regression analysis was used to compute the correlation in the validation data. This before-and-after design results in "paired data," and both parametric and nonparametric statistical tests were used. We used a paired t-test to test the mean difference in bacterial counts between the pro- and post-wash samples, and a random effects model to estimate the individual components of variance. The difference in the median bacterial counts was tested using the signed rank test. We used various diagnostic measures to examine the assumptions of the statistical tests; and means, medians, 95% confidence intervals (CIs), and P-values (using P<.05 as statistical significance) to report the results. The Bonferroni multiple comparisons procedure was used to determine whether the bacterial counts were statistically different among subgroups of health care providers. All statistical analyses were performed using SAS (Cary, NC) software.

A total of 184 culture plates showing before and after samples for 92 stethoscopes were analyzed. The provider breakdown of the sample consisted of nurses (39%), residents (30%), attending physicians (15%), faculty (13%), and medical students (3%). Thirty-five (approximately 1 in 6) of the 184 plates were randomly sampled for validation. There was a high degree of reliability between the investigator's bacterial counts and the bacterial counts of the gold standard (r=+0.98, P<.001).

Bacterial counts. The distribution of the bacterial colony counts skewed right in both the prewash (0-198) and post-wash (0-48) samples. The FIGURE shows the skewed distributions in the actual bacterial counts for the 92 pairs of plates before and after hand and stethoscope washing. In the prewash sample, the mean bacterial count was 28.4 (95% CI, 20.2-36.6), vs a post-wash mean of 3.2 (95% CI, 1.8-4.6; P<.001). This resulted in an estimated difference in mean bacterial counts of 25.2 (95% CI, 17.233.3). The difference in the medians was also significant, with a prewash median of 11.5 and a post-wash median of 1.0 (P<.001). The difference between the pre- and post-wash periods remained significant even after using various transformations to normalize the data. Random effects modeling showed that very little (<5%) of the total variation was related to the type of health care provider.

Types of bacteria. The TABLE gives the breakdown and frequency of the various types of bacteria that we identified on the stethoscopes. Many were of low pathogenic potential, such as coagulase-negative staph species, which would not cause disease in healthy individuals. However, in hospitalized or immunocompromised patients, they could well induce illness. There were also several clearly pathogenic bacterial isolates, including 3 MRSA colonies (each on a different stethoscope), as well as Pseudomonas and Klebsiella. All of these isolates were killed by scrubbing with foam.

Considering only the MRSA colonies, the number needed to treat is 31 (95% CI, 18-89), indicating that for approximately every 31 hand- and stethoscope-washings with the alcohol-based foam, i MRSA colony could potentially be eliminated from a stethoscope head. 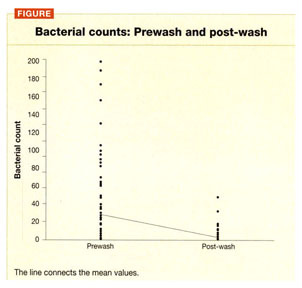 The findings of this study suggest that the use of alcohol-based hand foam to simultaneously sterilize the hands and a stethoscope head significantly reduces the number of bacterial colonies, including MRSA. The quantifiable risk of clinical infection with MRSA in patients through brief contact with a contaminated fomite such as a stethoscope is unknown. However, the transmission of the bacteria itself from contaminated surfaces and hands through brief contacts has been well established. (11,12)

A new standard for cleaning stethoscopes?

Swiping stethoscopes with alcohol pads is currently the gold standard for cleaning these instruments, but physicians do not consistently use alcohol pads for this purpose. Moreover, the pads must be purchased and available for use, require an extra step, and produce waste that must be disposed of--and clinicians still have to cleanse their hands, often using alcohol-based hand foam. Using the foam to cleanse the stethoscope while cleaning hands requires no added cost or additional time, and may reduce or prevent serious nosocomial and community-based infections.

* Limitations of the study

One limitation of this study was the lack of control of the washing procedure. But because our goal was to see how the technique fared in actual use among all participants, uniform technique was not required. Knowing they were in a study may have altered the way the participants washed their hands and stethoscopes. If this were true, however, we would expect a much larger proportion of the total variation to be due to differences among clinicians than the 5% that was found.

This technique does not eliminate all bacteria--for instance, sporulating organisms such as Clostridium difficile are not killed by alcohol products. (18) Yet friction alone has been found to reduce the number of these pathogens (A.S., unpublished data, 2007).

This study utilized alcohol-based hand foam because it was available at the study institution, so we cannot make any claims for nonalcohol-based products. It does appear, however, that alcohol-based foam may not be susceptible to bacterial resistance, as had previously been found in triclosan-containing products. (19)

It is not known whether the alcohol-based foam will damage stethoscope diaphragms. Previous studies have suggested that alcohol pads do cause damage to the rubber components of stethoscopes, (16) but the foam studied here, like most similar products, contains emollients that may or may not have a protective effect. Another study would be necessary to fully assess this question.

While it is impossible to destroy all bacteria or eliminate all infections by simultaneous hand and stethoscope cleansing, many infections could potentially be prevented with this simple component of a comprehensive infection control program. Alcohol-based hand foam is already in use for hand cleansing between patients in many inpatient and outpatient settings, and this procedure requires no added cost and no additional time. Further research is necessary to determine whether the reduction of bacterial growth also corresponds to a reduction in clinically related disease. The results of this study provide evidence that hand foam, when used to simultaneously sterilize the hands and stethoscope, can significantly reduce the number of bacterial colonies on stethoscopes.

The authors reported no potential conflicts of interest relevant to this article. 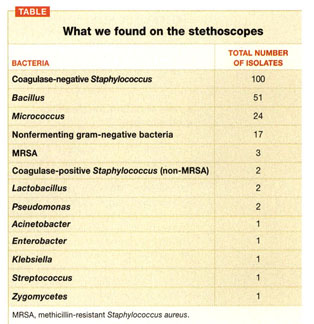