Argan oil has sky-rocketed from a mere tourist attraction to one of the most prized oils in the world in a few short years. Argan oil's unique savor and multiple pharmacological properties are responsible for this success. Argan oil is almost exclusively produced in southwestern Morocco, one of the poorest parts of the country, where all-women cooperatives specialize in high quality argan oil extraction. This activity is therefore providing a welcome financial stream. However, the argan tree, the fruit of which provides argan oil, could rapidly become an endangered species due to years of recurrent drought, forest overuse, and poor forest management. Consequently, women cooperatives aimed at sustainably supporting the argan forest represent the cornerstone of a vast program involving the reforestation of fragile and particularly degraded lowlands and also provide education of rural women.

The argan tree (Argania spinosa (L.) Skeels; Sapotaceae) is a slow-growing tree exclusively endemic to the barren lands of southwest Morocco. (1) It is currently considered a relic of the tertiary era and is the only member of the Sapotaceae family of plants whose distribution is not intertropical. The argan forest, which covers about 8,280 [km.sup.2], was declared a Biosphere Reserve by UNESCO in 1998. Traditionally, Amazigh (argan forest native) women used the kernels of argan fruit stones as a source of edible oil. Oil extraction requires a tedious multistep process that begins with careful fruit drying (2) and involves prolonged hand-malaxing of an aqueous argan kernel dow, (3) with an extraction yield up to 35 percent. Improvements in argan oil extraction methodology, such as the use of electric screw-presses, have allowed the discontinuation of the hand-malaxing step, resulting in as much as 60-percent extraction yield. (3) Even more recent technology permits the large-scale production of virgin (4) argan oil, without denaturing its quality, (5) while preserving the sustainable development of the argan forest. (6) Argan oil is principally produced as edible and beauty grades. A third grade referred to as cosmetic oil also exists. Virgin edible argan oil is prepared from slightly and carefully roasted kernels. (7) It is copper-colored, presents a slight hazelnut taste, and is the basic ingredient of the Amazigh diet. (8) Virgin beauty argan oil, that is prepared from unroasted kernels, is golden-colored and has no taste. Virgin edible argan oil presents a better long-term preservation profile than virgin beauty argan oil. At 25[degrees]C, the former preserves its quality for up to two years, while the shelf life of the latter is only 3-4 months. (9) Virgin edible and beauty argan oils are produced in Moroccan women cooperatives, and their world-wide marketing actively contributes to the argan forest sustainable development.

Traditionally, argan oil was used extensively in Morocco as a topical oil to treat various ailments, such as dry skin, acne, psoriasis, eczema, wrinkles, joint pain, and skin inflammation. (11) It is also used to prevent hair loss and dry hair. (11) Ingested, argan oil is a choleretic and hepatoprotective agent that can prevent hypercholesterolemia and atherosclerosis. (11) 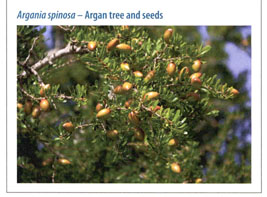 Virgin argan oil of edible or beauty grade is composed of 99-percent acylglycerides (primarily triglycerides). (11) Unsaponifiable matter, which represents the remaining one percent, is composed of carotenes, tocopherols, triterpene alcohols, sterols, and xanthophylls. (11) Fatty acids that compose acylglycerides are principally oleic and linoleic acid, 43-49 percent and 29-36 percent, respectively. (12) Oleic acid is a monounsaturated fatty acid of the omega-9 family, while linoleic acid is a polyunsaturated fatty acid belonging to the omega-6 family. Palmitic and stearic acid are saturated fatty acids found at a concentrations of 11-15 percent and 4-7 percent, respectively. (12)

Some argan oil pharmacological properties are likely to result from its high unsaturated fatty acid content. Oleic acid, a monounsaturated fatty acid, has numerous therapeutic effects (13) that contribute to the important properties of argan oil. Because a linoleic acid deficiency can induce poor wound healing, (14) the high linoleic acid content of argan oil may contribute to its traditional indication as a cure for skin inflammation. However, several other oils are rich in oleic and/or linoleic acid but do not possess the same therapeutic effects. Many of argan oil's specific health benefits are attributed to its composition of unsaponifiable matter (although it constitutes a small amount of the oil) and high tocopherol content. (15) The tocopherol content of argan oil is 620 mg/kg, compared to 320 mg/kg in olive oil.

Tocopherols are molecules with strong antioxidant and free radical scavenging properties. gamma-Tocopherol, the most efficient free radical scavenger of all tocopherols, (16) composes 69 percent of argan oil total tocopherol content. (15) Because tocopherols and sterols can act synergistically, the specific combination of molecules found in the unsaponifiable matter is theorized to contribute to the therapeutic aspects of argan oil. (17)

Argan oil-containing creams are frequently indicated in cosmetology as moisturizing, anti-aging, and repair creams. The anti-sebum activity of topical aryan oil was demonstrated on 20 17- to 50-year-old volunteers with oily facial skin. Sebum level was determined on forehead and both cheeks. A twice daily facial application of an argan oil-containing cream for four weeks revealed significant anti-sebum activity that translated to reduced greasiness and improved appearance of oily facial skin. (18) Treatments longer than four weeks did not show improved sebum-regulating efficacy.

Epidemiological data have indicated that regular consumption of edible olive oil could have significant protective effects against colorectal, breast, prostate, pancreas, and endometrial cancer. (19) The combined presence in olive oil of oleic acid, phenolies endowed with antioxidant properties, and squalene is currently considered to be the key factor to explain this antiproliferative activity. (20) Because aryan and olive oils have these essential constituents in common, an antiproliferative effect has been claimed for aryan oil. (21)

The antiproliferative activity of aryan oil unsaponifiable matter, mainly polyphenols, tocopherols, and sterols, has been studied in vitro on hormone-independent (DU145 and PC3), hormone-dependent (LNCaP), and SV40-immortalized prostate tumor cell lines. (22,23) Sterols from aryan oil appear to have particularly strong antiproliferative activity against PC3 cell line; whereas, polyphenols display a high activity against DU145 and LNCaP cell lines. The precise mechanism of action as an antiproliferative agent is still poorly understood. Cell cycle arrest mediated by up-regulation of the P27 cell cycle regulatory protein may explain the specific activity of aryan oil polyphenols. Inhibition of ornithine decarboxylase or nitric oxide synthase, two enzymes overexpressed in prostate cancer, could also be involved in the observed activity of polyphenols. (23) Saponins from aryan press-cake, the residue remaining after aryan kernel pressing, also have antiproliferative effects on DU145, LNCaP, and PC3 cell lines. (23,24) However, these saponins, which are water-soluble compounds, have not been identified in aryan oil.

Studies using HT-1080 fibrosarcoma and MSV-MDCK-invasive cells have confirmed the antiproliferative activity of aryan oil polyphenols. (25) Using hepatoma tissue culture cells, the squalene and polyphenol-rich extract of aryan oil has been shown to reduce the ability of extracellular signal-regulated kinases 1 and 2 (ERK1/2) to respond to increasing doses of insulin, while the response to serine/threonine kinase (Akt) remained undisturbed. (25) Aryan oil polyphenols also interrupt the insulin-signaling cascades at the MEK1/2-ERK1/2 interface. (25)

A human cohort study provides evidence for the hypolipidemic activity of aryan oil. (30) During this strict lipid-controlled study, 60 men were first fed 25 g/day of butter on toasted bread as a source of lipids for two weeks in order to establish baseline conditions. Then, butter was replaced by 25 mL/ day of virgin argan oil for one half of the group, while the other half received the same amount of virgin olive oil; otherwise, a similar diet was given to both groups. After three weeks, participants underwent medical examination and parameters such as body mass index (BMI), systolic and diastolic blood pressure (SBP and DBP, respectively), serum total cholesterol, HDL, LDL, apolipoproteins A-I and B, and triglyceride levels were measured and compared with baseline values. BMI, SBP, DBP, and total cholesterol levels did not significantly change during the three-week study. In the aryan oil group, HDL cholesterol and triglyceride levels significantly increased and decreased, respectively. Conversely, significant decreases in LDL cholesterol and apolipoprotein-B (apo-B) were observed only in the olive oil group. (30)

The impact of aryan oil consumption on oxidative stress plasma markers and HDL paraoxonase 1 (POND activity has been evaluated. This study is the first of its kind to provide sound evidence for the potential antiatherogenic activity of aryan oil. (31) After three weeks of daily aryan oil consumption (25 mL/day), plasma PON1 activity, antioxidant vitamins, and LDL susceptibility to oxidation were measured. (31) A significant increase in PON1 activity and beneficial effects on plasma lipid peroxide, conjugated dienes, and vitamin E concentration were observed. This was supported by an in vitro increase in resistance of LDL cholesterol to copper-induced oxidation. The antioxidant component of argan oil, composed of polyphenols, tocopherols, and sterols, is suspected to be involved in this antiatherosclerotic activity. (31) 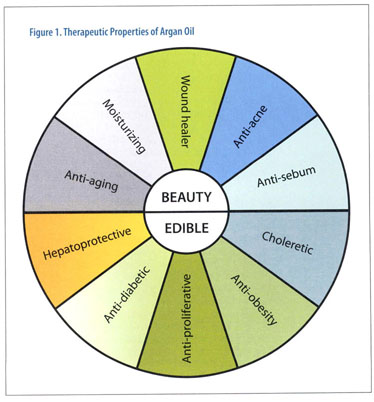 A second cohort study confirmed the antioxidant and hypocholesterolemic properties of argan oil. (32) The study was conducted on 96 subjects, 62 of whom were regular argan oil consumers (15 g/day). The other subjects received their lipids from an unknown source. Significantly lower LDL cholesterol and apo-B levels were observed in argan oil consumers compared to non-consumers. Lipoprotein(a) concentrations were also lower in the argan oil group. Because of the observed concomitantly high plasma vitamin E levels, the antioxidant effects may be responsible. However, no significant differences were observed in thiobarbituric acid reactive substances that are a common index to evaluate lipid peroxidation. Altogether, these results suggest a beneficial impact of argan oil consumption to prevent coronary artery disease in humans, even though the precise metabolic pathways involved are not yet fully elucidated. (33)

Finally, argan oil improves endothelial function in hypertensive rats. (34) It also inhibits platelet aggregation by acting on the attachment of fibrinogen to GIIb/IIIa platelet receptors without affecting the adhesiveness of platelets to the vascular endothelium. Rat studies were performed in vitro or in vivo. In vitro, argan oil prevents thrombin- or epinephrine-induced platelet aggregation. In vivo, a similar activity was observed, while platelet concentration remained unchanged. Argan oil can reduce platelet aggregation, therefore minimizing the risk of thrombosis in cardiovascular events. (35)

Antidiabetic activity of argan oil has been demonstrated in animals. An oral glucose tolerance test was performed on healthy and diabetic rats. Intraperitoneal administration of argan oil (2.5 mL/kg) 30 minutes before glucose loading induced significant blood sugar reduction that lasted for three hours. (36) Comparison of the metabolic response of rats to a free-access, high fat/high glucose diet in which six percent of the fat was replaced by either argan oil or fish oil showed that both oils resulted in the restoration of insulin signaling in fat and liver cells, but only fish oil restored systemic insulin sensitivity. (37)

When streptozotocin-induced diabetic rats were orally fed with argan oil (2 mL/kg), a significant glycemia reduction was observed after 15 days. Argan oil also significantly decreased the amount of absorbed glucose in the jejunum segment. In a recent rat experiment, the antihyperglycemic effect of argan oil was further confirmed, while no change in blood glucose levels was observed for normoglycemic fasted rats. (38)

Side Effects and Toxicity

Argan oil has been used in Morocco as food and applied to the skin for centuries; there are currently no known acute or chronic toxicity levels. One case of anaphylaxis has been reported. (39)

Therapeutic doses to prevent metabolic diseases range from 15-30 g (1-2 tablespoons) uncooked argan oil per day, with maintenance dosing of 3-6 g daily. Argan oil can be used as a salad dressing or added to dishes after cooking. It enhances the flavor of ethnic food. Although argan oil should not be used for prolonged frying, it is appropriate for short-time frying. (40)