Abstract The electrophoretic deposition (EPD) of chitosan coatings on 316L stainless steel substrates using alcohol-water solutions was investigated in different electrical fields and times. The effect of water content in solution on the pH and conductivity of solution, current density during EPD, deposition rate and morphology, adhesion strength, and corrosion resistivity of coatings were studied. The difference between the conductivities obtained from conductivity meter and Ohm's law was used as a criterion for the degree of water electrolysis during EPD. It was found that in the same water content, the degree of water electrolysis decreases as the molecular weight of alcohol increases. The optimum water content to achieve high quality coatings was 5, 15, and 20 vol% in methanol, ethanol, and isopropanol, respectively.

Chitosan is a cationic polysaccharide (polymer of 2-amino-2-D-glucose), which can be produced by alkaline N-deacetylation of chitin. Due to its attractive properties, such as biocompatibility, nontoxicity, biodegradability, antibacterial activity, and chemical resistance, chitosan has been used in several biomedical applications such as drug encapsulation and tissue engineering scaffolds. The polysaccharide backbone of chitosan is structurally similar to glycosamine, which is the major component of the extracellular matrix of bone and cartilage. (1-7)

Electrophoretic deposition (EPD) is an electrochemical technique carried out in a two-electrode cell, and deposition is achieved by the motion of charged particles or polymer macromolecules in suspension toward the electrode with opposite charge under an applied electric field. This method has been used to fabricate a great variety of ceramics, polymers, and composite coatings for biomedical applications. (7-10)

The deposition weight (tv) during the EPD process can be described by the Hamaker equation (11):

where C, [mu], and t are the particle concentration, electrophoretic mobility of particles, and deposition time, respectively; E is the electrical field and E = U/d. where U = [U.sub.ap] - [U.sub.dep], and [U.sub.ap] is the applied voltage and [U.sub.dep] is the voltage drop over the deposit; and d is the distance between the electrodes. In this equation f is a coefficient, implying that not all the particles brought to the substrate electrode are incorporated in the deposit (f [less than or equal to] 1). (11,12)

The feasibility of chitosan deposition on metallic substrates by the EPD method has been demonstrated. Chitosan films have been obtained from its solution in various aqueous and mixed water-alcohol solvents. (17-15) Simchi et al. (13) studied the EPD of chitosan dilute solutions in a mixture of distilled water-acetic acid with pH ranging from 2.9 to 4.1. They showed that charge and mobility of chitosan and conductivity of solutions are affected by the concentration of acetic acid (pH). The mobility of chitosan macromolecules increased while the conductivity of solutions decreased with pH increasing. They found that the deposition rate increases by increasing pH.

Chitosan can dissolve in water just when it is protonated in acidic solutions. According to equation (2), chitosan becomes a cationic polyelectrolyte at pH < 5. Applied electric field enables the motion of the charged chitosan macromolecules toward the cathode surface. The EPD of chitosan in aqueous solution is concomitant with cathodic reduction of water [equation (3)] resulting in production of hydrogen gas and a pH raise at the electrode surface. When the solution's pH increases more than 6.3, many of the amino groups are deprotonated, according to equation (4), and chitosan loses its charge and forms an insoluble deposit on the cathode's surface. (13,16,17)

Gebhardt et al. (14) deposited chitosan films on 316L stainless steel by EPD from aqueous solutions. They showed that the applied electric field during EPD can control morphology and other physical properties of films. They found that the increase in the applied electric field increases the concentration of bubbles in the chitosan film. Bubble formation occurred because of the gas entrapment in the growing film.

The purpose of this work is to study the possibility of chitosan deposition using its dilute solutions in a mixture of distilled water and alcohol (ethanol, methanol, and isopropanol) on metallic substrate and investigation of different factors such as alcohol type, water content, and applied electric field on the properties of obtained coatings (corrosion resistivity and adhesion strength). 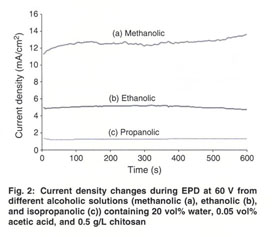 Medium molecular weight chitosan (MW = 300 kDa, across) with a degree of deacetylation of about 85 %, and acetic acid (99.8%, Merck) were used. The solvents, methanol (99.99%), ethanol (99.8%), and isopropanol (99.8%) were purchased from Merck. Deposition was performed using 0.5 g/L solution of chitosan in alcohol with various contents of water containing 0.05 vol% acetic acid for enhancing the dissolution of chitosan. All suspensions were magnetically stirred for 5 h. The electrical conductivity of the solutions, with different volume percent (vol%) of water in alcohols was measured by a conductivity meter (Inolab Company, WTW Cond 720 model). The pH of solutions was measured using the pH meter (744 pH meter, Metrohm).

EPD was accomplished in a two-electrode cell. Substrates were 10 mm x 20 mm x 1 mm 316L stainless steel plates on which only 1 [cm.sup.2] was exposed to deposition, and the rest of the surface was insulated. The counter electrode was a 316L stainless steel plate with the same dimensions as the substrate. Two electrodes were set in an EPD cell with 1 cm distance. EPD was performed at 5, 20, and 60 V/cm for different times (0.5,2,4, 6, 8, and 10 min). Current density during EPD was recorded by a computer-connected digital multimeter (Fluke, 289 True RMS). The high frequency AC voltage is applied between the electrodes of the conductivity meter during conductivity measurement, which prevents water electrolysis, and so the metered conductivity is the intrinsic conductivity of ions existing in the solution. To study the electrolysis of water, the electrical conductivity was calculated using Ohm's law (S = 1IR = I/V) by substituting / with the value of the current measured by multimeter at initial times of EPD, and V is the applied DC voltage during EPD which does not inhibit the electrolysis of water. The difference between two conductivities (the one obtained from the conductivity meter and obtained from Ohm's law) is the criterion for the degree of water electrolysis during EPD.

The deposits were dried overnight in air and the weight gain was measured by the difference between sample weights before deposition and after drying with an accuracy of 0.1 mg (Sartorius, CP324s). Due to the presence of bubbles in the coatings, the thickness of the coatings was different at each point of surface, and so it could not be an appropriate criterion for comparing samples. Therefore, to compare the influence of different factors, the weight of the coatings were measured.

The adhesion strength of the coatings deposited from the different suspensions at 20 V/cm was determined by pull-off test according to ASTM D4541. To prepare the samples for the pull-off test, the plates with the dimensions of 1 mm x 60 mm x 60 mm were used as cathode and anode. The corrosion behavior of the bare 316L stainless steel and the samples coated with chitosan at 20 V/cm from the different solutions was studied by electrochemical impedance spectroscopy (EIS) and polarization tests in simulated body fluid (SBF) at 37.5[degrees]C. SBF was prepared according to the method described in reference ([sup.18]). All the tests were performed using a potentiostat/galvanostat Autolab 84367 with a platinum plate as counter electrode and a saturated calomel electrode as the reference (scan rate: 1 mV/s, frequency range: 0.1 Hz-10 kHz). 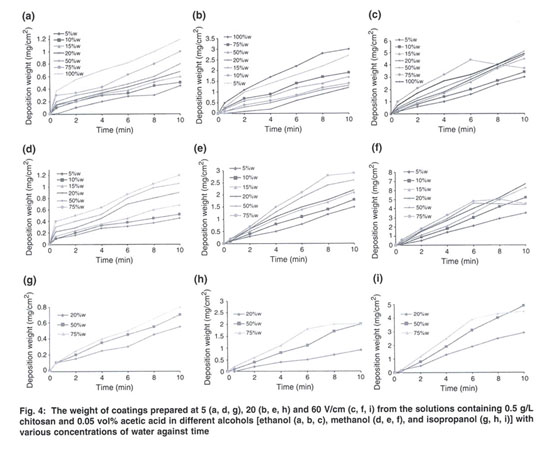 Electrical conductivity of solutions with the same water content increases in the order of methanol > ethanol > isopropanol. According to reaction (5), the acetic acid reacts with water and produces hydronium ion, which accelerates dissolution of chitosan through its protonation [reaction (2)]. Reaction (6), the net reaction, explains the increasing of the electrical conductivity by the reaction between acetic acid and chitosan:

The results obtained for conductivity measurement imply that reaction (6) moves forward in the solutions prepared from alcohols, in order of methanol > ethanol > isopropanol, which indicates that increasing molecular weight of the alcohol causes decrease of the chitosan protonation. 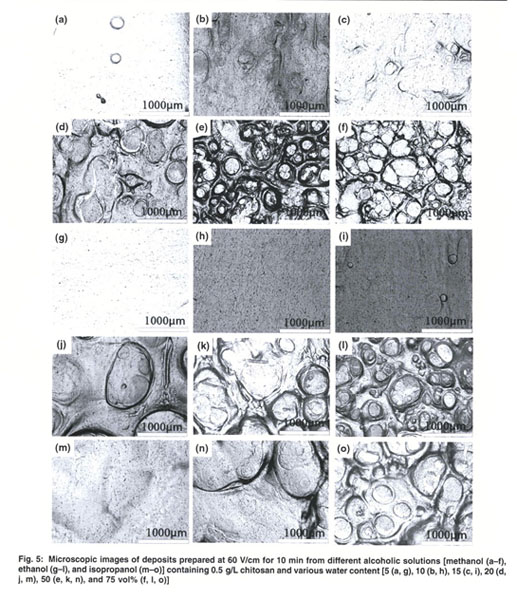 Figure 4 shows the weight of coatings prepared from methanolic (a, b, c), ethanolic (d, e, f), and isopropanolic (g, h, i) solutions containing 0.5 g/L chitosan, 0.05 vol% acetic acid, and various vol% of water at 5 (a, d, g), 20 (b, e, h), and 60 V/cm (c, f, i) against time. The linear trend of deposition weight curves vs time can be explained by the Hamaker equation [equation (1)]. There is an increase in the deposition weight by increasing the applied electric field. As discussed above, the presence of water and charged chitosan results in low electrical resistance deposits and negligible potential drop across deposit; therefore, the trend line's slope of deposition weight curves vs time which indicates the rate of deposition is a distinct constant amount for each specific condition. In the same water content and EPD conditions (time and electrical field), deposition rate increases in the order of methanol > ethanol > isopropanol, which is in agreement with the values of mobility for chitosan in these solutions. In the case of 75 vol% water, when the time of test exceeds 8 min, the weight of deposition is decreased due to the blow-out of bubbles, resulting in coating detachment from the substrate. As discussed, increasing water content in solutions increases the dissociation of acetic acid and consequently, the chitosan macromolecule's protonation, which results in faster deposition of chitosan.

Figure 5 shows optical microscopic images of deposits prepared from solutions containing 0.5 g/L chitosan in different alcohols with various vol% of water. The concentration of observed bubbles in deposits increases with increasing water content and applied electrical field. The concentration of bubbles in deposits increases in the order of isopropanol < ethanol < methanol (Fig. 5d, 5j, 5m), which correlates with the results obtained for the degree of water electrolysis during EPD (Fig. 4).

The results of the pull-off test applied on the chitosan coatings prepared from alcoholic solutions, containing 0.5 g/L chitosan and various contents of water at 20 V/cm with the same weight, are represented in Table 1. The results show that as the water content in the solution increases, the adhesion strength of deposited coatings decreases. In similar conditions, the adhesion strength of the coatings deposited from ethanolic and methanolic solutions is the maximum and minimum, respectively.

Figure 6 shows the polarization and impedance curves for coatings obtained from alcoholic solutions with various vol% of water and 0.5 g/L chitosan at 20 V/ cm for 10 min in SBF at 37.5[degrees]C. The values of [I.sub.corr] and [E.sub.corr] are listed in Table 2. It can be concluded that in the case of coatings prepared from isopropanol and methanol, increasing of water content results in increasing the corrosion current density and consequently decreasing the corrosion resistance of coatings. A decrease in the corrosion resistance of coatings, deposited from the solutions with higher water content, might be a result of the presence of more bubbles in them.

Polarization and Nyquist curves for the coatings deposited at various electric fields (5, 20, and 60 V/cm) for 10 min from methanol-5 vol% water solution containing 0.5 g/L chitosan and 0.05 vol% acetic acid in SBF and at 37.5[degrees]C are shown in Fig. 7. In this case, increasing the electrical field increases the corrosion resistance of the coating due to its weight increasing (and thickness) without any noticeable change in water electrolysis (Fig. 4d-4f) and thus in bubble concentration.

Chitosan films were produced from alcohol-water (5-75 vol%) solutions on 316L stainless steel by EPD. The pH and electrical conductivity of the alcoholic solutions, containing 0.5 g/L chitosan and 0.05 vol% acetic acid, decreased and increased with water content in the solution, respectively. Whereas the pH of isopropanolic solutions with less than 20 vol% water was more than 5, the positively charged chitosan neutralized and chitosan was insoluble.

The deposition weight increases linearly with time, due to the low resistivity of the deposit; it is concluded that the low resistivity of the deposits was because of the presence of water molecules and protonated chitosan. Increasing the water content in solutions increases the deposition weight because of the increase in the electrical conductivity of solutions. It was found that the electrolysis of water present in solutions, which results in bubbling, increases as the water vol% increases in the solution. The size of bubbles increases as the electrical field or water content in the solution increases. 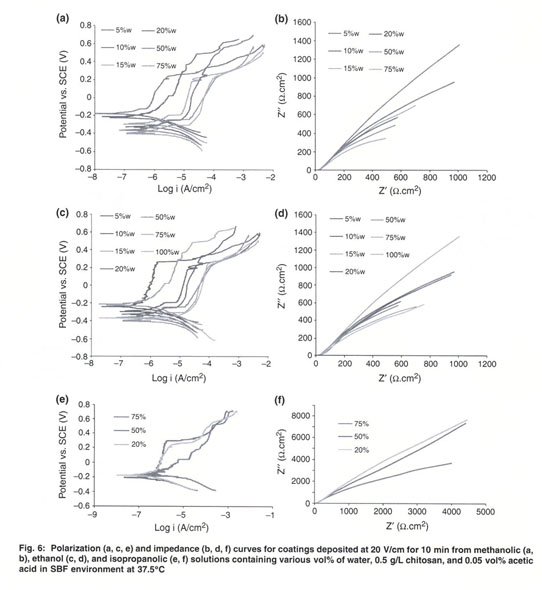 Leila Sorkhi and Morteza Farrokhi-Rad have contributed equally to this study.

Please note: Some tables or figures were omitted from this article.