A solar collector is the major component of any solar water heating system. The amount of heat energy utilised by the flat-plate solar collector from the solar radiation can be enhanced by using nanofluid. This experimental work investigates the efficiency of a flat-plate solar collector with and without ZnO/water nanofluid. The weight fraction of the nanoparticles was chosen as 0.1% and efficiency of solar collector was obtained for different mass flow rates of working fluid such as 0.0084, 0.0167 and 0.025 kg/s. Zinc oxide nanoparticles were produced using plant extract method from green tea leaves and zinc acetate. The addition of nanoparticles to a base fluid produces a nanofluid which has enhanced thermal characteristics compared to that of base fluid and the results showed that the nanofluid increases the collector efficiency in comparison to water as an absorbing medium.

Solar water heating is one of the effective methods of utilising solar heat to perform many useful tasks. Solar thermal energy is the largest exploitable resource and it is a very suitable source for heating. It can be freely used and does not need to be transported as it is available everywhere. The solar energy when compared to fossil fuels and nuclear power it is an environmentally clean source of energy. Solar collectors are the special type of heat exchangers which absorbs the incoming solar radiation which is converted into heat and transferred to a fluid usually air, water or oil which flows through the collector. The poor heat transfer properties of conventional fluids such as water compared to most solids are the major obstacle to the high effectiveness and compactness of the system. There are several conventional approaches which are available to improve the collector's efficiency such as optimising the size of the collector or by altering the glazing materials, but these modifications are often not convenient. One of the effective methods to increase the efficiency of the collector is to replace the working fluid with nanofluids which is a relatively new class of fluids and these nanofluids are suspensions of metallic or non-metallic nanoparticles in a base fluid and have a lower heat capacity compared to commonfluids. A significant increase in liquid viscosity, liquid thermal conductivity and heat transfer coefficient are some of the unique characteristics of nanofluids. It is well known that metals in solid phase have higher thermal conductivity than those of fluids [1].

Tooraj Yousefi et al. [2] investigated experimentally the effect of multi-walled carbon nanotube (MWCNT)/water nanofluid as the heat transfer fluid in a flat-plate solar collector and reported that 35% enhancement in collector efficiency for 0.4 wt%.

Tooraj Yousefi et al. [3] conducted an experiment to investigate the effect of [Al.sub.2][O.sub.3]/water nanofluid, as working fluid, on the efficiency of a flat-plate solar collector with the nanoparticle size of 30 nm and reported that 28.3% enhancement in the collector efficiency for 0.2 wt%.

Ali Jabari Moghadam et al. [4] found that by using CuO-water nanofluid, the flat-plate solar collector efficiency was enhanced by 16.7% than that of water for 0.4 wt%. The experiment results also proved that the highest heat absorption by the collector varies at different mass flow rates for water and nanofluid.

Amirhossein Zamzamian et al. [5] investigated the effect of Cu nanoparticle and in this experiment one-step method was used to prepare copper nanofluid from the reduction of CuS[O.sub.4].5[H.sub.2]O with Na[H.sub.2]P[O.sub.2].[H.sub.2]O in the presence of ethylene glycol as the solvent. The weight fractions of the nanoparticles used were 0.2% and 0.3% with an average diameter of 10 nm and found that by increasing the nanoparticle weight fraction, improvement in efficiency of the collector was found.

Saleh Salavati et al. [6] experimentally investigated the thermal efficiency of a flat-plate solar collector using Si[O.sub.2]/EG-water nanofluid in three different volume concentrations such as 0.5%, 0.75%, and 1% for mass flow rates between 0.018 and 0.045 kg/s. The results elucidated that with an increase in nanofluid concentration from 0 to 1% an efficiency enhancement approximately between 4 and 8% was found.

Jee Joe Michael et al. [7] conducted an experiment under thermosyphon and two forced circulations using water and 0.05% volume concentration of CuO-water nanofluid in the flat-plate solar collector. The results showed that increase in thermal efficiency was 6.3% in thermosyphon, 2.7% in 0.01 kg/s and 0.4% in 0.1 kg/s flow rates.

Said et al. [8] reported the effect of using Ti[O.sub.2]-water nanofluid in a flat-plate solar collector. The volume fraction of the nanoparticles was chosen as 0.1% and 0.3% while the mass flow rates of the nanofluid varied from 0.5 to 1.5 kg/min. It was found that the energy efficiency was increased by 76.6% for 0.1 vol% and 0.5 kg/min, whereas the highest exergy efficiency achieved was 16.9% for 0.1 vol% and 0.5 kg/min by using the nanofluids incomparison to that of water.

The performance characteristics of the collector were determined based on ASHRAE Standard [10]. The collector performance test is performed under steady-state condition. After steady state conditions are obtained, the data of each test period was averaged and used in the analysis as a single point. The inlet and outlet temperatures of the fluid as well as the fluid mass flow rate are measured and the useful energy is calculated from Eq. (1). The useful energy can also expressed in terms of the energy absorbed by the absorber and the energy lost from the absorber by Eq. (2). 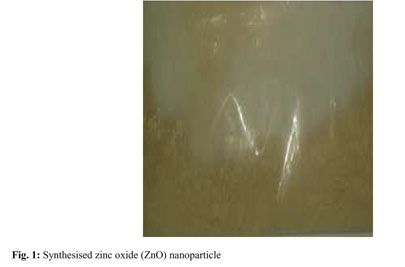 Where, [F.sub.R] is heat removal factor, [([tau][alpha]).sub.n] is the optical efficiency of the solar collector cover, [U.sub.L] is the overall heat loss coefficient of solar collector (W/[m.sup.2]K), and the term (Ti - Ta / [G.sub.T]) is called heat loss parameter or reduced temperature ([m.sup.2]K/W). By plotting the graph for efficiency against the heat loss parameter, a straight line is obtained. The Y-intercept of the line was indicated by the parameter of [F.sub.R][([tau][alpha]).sub.n], which is called absorbed energy parameter and the slope of the line is determined by the term [F.sub.R][U.sub.L], called removed energy parameter [12]. Efficiency is the function of specific heat, density and mass flow rate of different nanofluids which is calculated with regard to the volume fraction of nanoparticles.

Synthesis And Preparation Of Zno/Water Nanofluid:

The experiment was conducted by synthesising the zinc oxide (ZnO) nanoparticle and preparing the ZnO/water nanofluid. Due to the high price of commercially available nanoparticles, it was synthesised by biological based method. Green leaves initially about 20g was extracted and washed with distilled water. It acts as a reducing agent in the preparation of zinc oxide nanoparticles. Then these leaves were dried with the help of a microwave-assisted oven. After drying in the microwave-assisted oven these dried leaves was grinded and milled, so that the leaves in powder form will be obtained which was mixed with 250 mL deionized water in a clean flask and the mixture is boiled for about 45 min at 50[degrees]C. After boiling the solution was filtered by a micro-filter paper. 0.1 M of zinc acetate was dissolved in 250 mL of deionized water and stirred for few minutes. Then 50 mL of zinc acetate solution and 20 ml of filtered green tea solution was taken in a flat bottomed glass beaker and heated with constant stirring of about 300 rpm for 60 min. Sodium Hydroxide (NaOH) pellets which act as stabilizing agents was also added into the above solution. Formation of ZnO nanoparticles is indicated by the appearance of the brown colour of the solution. The solution is then removed from the magnetic stirrer and cooled to room temperature. The precipitate formed was then washed with distilled water about three times to remove the impure ions. It is then covered with an aluminium foil and placed in a hot air oven to completely dry the contents. The dried precipitate is finely powdered by using Agate mortar to produce ZnO solid particles in nano dimensions. Fig 1 shows the synthesised zinc oxide (ZnO) nanoparticle.

The characterization tests like XRD and SEM were done to determine the size of the synthesised nanoparticles as shown in Fig 2 and 3 respectively. 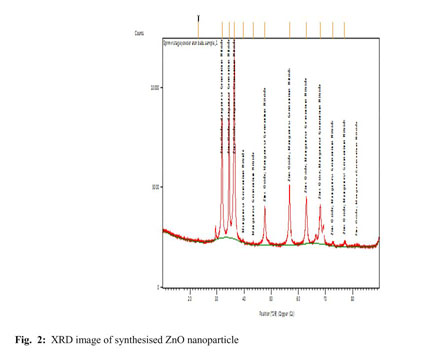 The characterization results showed that the synthesised nanoparticle had an average size of 30 nm. Then the two-step method was used to prepare the ZnO/water nanofluid. The required quantity of ZnO nanoparticles was dispersed into water and sonicated using an ultrasonicator for 2 h to break the agglomerated particles and to facilitate the homogeneous mixture of ZnO nanoparticles and water, called ZnO/water nanofluid as shown in Fig 4.

The weight traction of nanoparticles in the fluid was 0.1% and there was no surfactant added during the preparation of nanofluid. 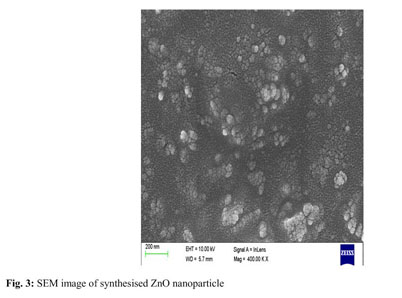 The schematic diagram and photographic view of the experimental setup for flat- plate solar collector using nanofluids were shown in Fig 5 and Fig 6 respectively.

It was a forced circulation system since the working fluid is circulated through the collector by using an electrical pump. A heat exchanger was used to absorb the heat load from the solar collector and transfer it to the cooling fluid. Mass flow rate of working fluid is measured by using flowmeter which is installed after the electric pump. A simple valve installed after the electric pump was used to control the massflow rate of working fluid.

Three T-type thermocouples with an accuracy of [+ or -] 0.1[degrees]C were used to measure the inlet, outlet and ambient temperature of the working fluid. These three thermocouples were connected to a Data Acquisition System which will measure and stores the data in the computer at regular intervals of time. Pyranometer was used to measure the total solar radiation. The experiment was conducted at different mass flow rates such as 0.0084 kg/s, 0.0167 kg/s and 0.025 kg/s by without using the nanofluid and by using ZnO/water nanofluid at 0.1 wt%.

The flat-plate solar collector was tested for various mass flow rates from 0.0084 kg/s to 0.025 kg/s around solar noon at time 10:30 to 15:30. Each experiment had conducted for several days and best experimental data which had minimum errors had been selected. 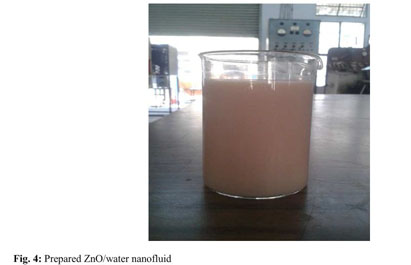 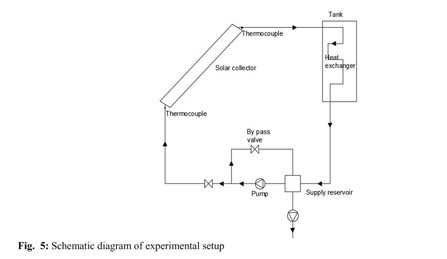 After initial readings were taken without nanofluid then the experiment was conducted by using ZnO/water nanofluid for three different mass flow rates. The nanofluid was prepared without using a surfactant and it was found to be stable up to 10 days. 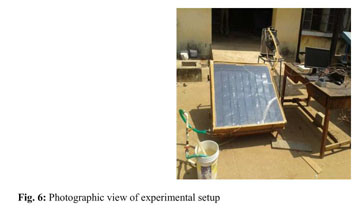 Thus, the flat-plate solar collector efficiency depends on solar radiation, surface geometry of the collector and mass flow rate of the working fluid. During the time of experiment the solar radiation was high around 12:00 to 13:30 after that the radiation decreases gradually. So, that the efficiency of the flat-plate solar collector was also high during this period. Also, the optimum mass flow rate depends on thermal characteristics of the working fluid.

Thus by plant extract method the zinc oxide (ZnO) nanoparticle was synthesised and effects of using ZnO/water nanofluid as the absorbing medium in a flat-plate solar collector was investigated experimentally for different mass flow rates. The following conclusions are drawn: 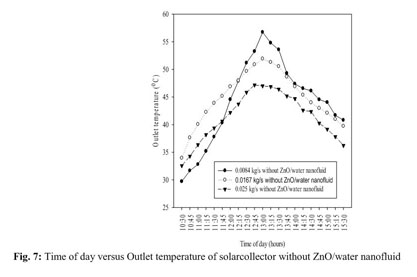 * The synthesised Zinc oxide (ZnO) nanoparticle had an average size of 30 nm.

* The efficiency of the flat-plate solar collector further can be enhanced by increasing the weight concentration of nanoparticle used to prepare the nanofluid. 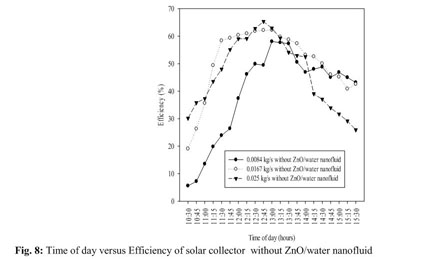 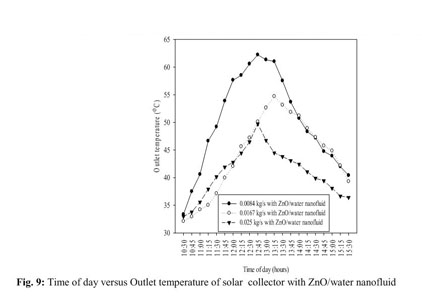 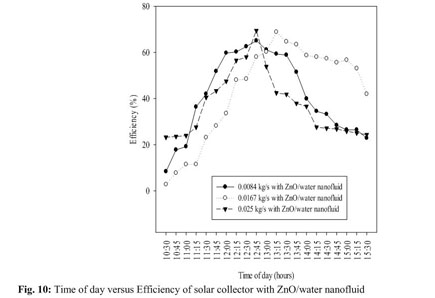