Situs inversus abdominalis and duodenal atresia: a case report and review of the literature

Fewer than 20 patients born with situs inversus and duodenal atresia have been reported in the literature. We present a patient with this condition. A newborn baby presented shortly after birth with persistent bilious vomiting. An abdominal radiograph showed a right-sided stomach bubble and a second bubble on the left--typical of duodenal atresia but with mirror image configuration. Laparotomy confirmed the diagnosis of situs inversus abdominalis, which was also demonstrated by contrast studies and ultrasound. Duodenoduodenostomy was performed and the patient discharged on day 8 postoperatively.

Situs inversus is associated with other congenital malformations including splenic malformations, left-sided liver and cardiac abnormalities; it is rarely associated with duodenal atresia. Duodenal obstruction in the presence of situs inversus has been described, including obstruction due to a web, stenosis, pre-duodenal portal vein and complete atresia. The patient presented in this paper had a duodenal web in the second part of the duodenum. Before undertaking surgery it is important to establish the presence of associated gastrointestinal and cardiac abnormalities.

Gastro-intestinal and cardiac anomalies associated with intestinal situs inversus are extremely uncommon. (1,2) There are less than 20 patients reported in the literature who were born with duodenal atresia in the setting of situs inversus. (3) These patients can also have other associated intra-abdominal abnormalities. This case is presented to highlight the importance of identifying the duodenal atresia by means of the unusual double-bubble configuration, and to describe pre- and postoperative care of possible associated malformations.

A full-term HIV-exposed female baby was born by caesarean section. Her mother was unbooked and delivered at a regional hospital; she was a 24-year-old gravida 1, para 1, who was noticed to have polyhydramnios when she presented for delivery.

The baby weighed 2 340 g and her Apgar scores were 9 and 10. One day after birth she began to experience persistent bile-stained vomiting. On examination she had an ejection systolic murmur (grade 3/6) and all peripheral pulses were palpable. The abdomen was soft and not distended, and no masses were palpable. An abdominal radiograph showed the mirror image of a typical double-bubble configuration of duodenal atresia (Fig. 1). This was confirmed with a barium meal examination. An abdominal ultrasound scan was suggestive of situs inversus and a possible left-sided liver. Renal function and a full blood count were normal. An echocardiogram showed an interrupted inferior vena cava (IVC) with the azygos system in continuity with the superior vena cava (SVC), good-sized branch pulmonary arteries and left-to-right shunting of blood. The aortic arch was normal, vessels to the head and neck were intact and the coronary arteries were normal.

Anatomical findings at laparotomy confirmed situs inversus and atresia of the duodenum situated on the left side. The duodenum was in continuity at the site of atresia with the pancreas in the concavity of the duodenal loop (Fig. 2). The distal bowel was unused and small in calibre. Saline injection excluded distal atresias. The mesentery of the small bowel was unfixed and there were no other atresias noted in the small bowel. The colon was predominantly on the left side. The liver was in its normal anatomical position with the gallbladder arising from the right lobe. Portal structures and bile duct traversed the midline to enter the duodenum on the left inside. Both kidneys were normal and the spleen was on the right side with a single spleniculus situated inferiorly.

The colon was mobilised and the duodenal atretic segment exposed. A routine diamond-shaped duodeno-duodenostomy was performed. Postoperatively the baby was kept on intravenous broad-spectrum antibiotics and total parenteral nutrition. The postoperative course was uneventful. Oral sips started on day 3 and she was discharged on full feeds on day 8.

The frequency of duodenal atresia ranges from 1 in 5 000 to 20 000 live births. An association with situs inversus is very uncommon. Situs inversus and splenic malformations can be seen in the form of asplenia (53%), polysplenia (42%), and a single right-sided spleen (5%).2 At laparotomy the intra-abdominal organs, their orientation and any abnormalities should be carefully noted and necessary procedures undertaken. Associated abnormalities can include hypoplasia of the pancreas, biliary atresia, absence of the gallbladder and polycystic liver. (2) Our patient was examined with these in mind, and right-sided spleen and situs inversus of stomach and duodenum were the only abnormalities found.

Genetics and embryology of situs inversus are complex. Familial inheritance has been evident in some cases. (1) A number of environmental factors regarding laterality defects have also been suggested, including maternal diabetes and retinoic acid exposure. (1) Between 3% and 5% of patients with situs inversus have primary ciliary dyskinesia. Primary ciliary dyskinesia is an autosomal recessive condition. It is suggested that most heterotaxic disorders are multifactorial in their causation. (4) Congenital heart defects are present in 5-10% of patients with situs inversus. Our patient had no family history of situs inversus.

The association of congenital duodenal obstruction with abdominal situs inversus has only been described in 20 patients. Data that could be extracted from the available literature are documented in Table I. The male-to-female ratio was equal. The spleen was found to be positioned on the right in the majority of patients. Although duodenal abnormalities include complete obstruction by a web, stenosis, obstruction due to pre-duodenal portal vein and complete atresia, most of the patients had complete atresia requiring duodeno-duodenostomy. (3,4) Our patient had complete obstruction by a duodenal web in the second part of the duodenum distal to the opening of the bile ducts. 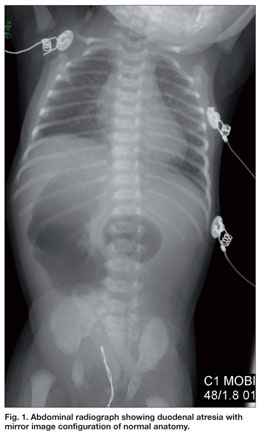 The most common intra-abdominal abnormalities seen with situs inversus are left-sided liver, asplenia or right-sided spleen and malrotation. The less common abnormalities are gastroschisis, biliary atresia and diaphragmatic hernia. The heart is the most commonly affected extra-abdominal organ in patients with situs inversus, and in this situation cardiovascular symptoms are usually the first ones that lead to detection of the abnormalities. It is important to establish the anatomy of the heart before performing any operative procedure. In our case an echocardiogram demonstrated normal cardiac structure but absence of the IVC. The latter is a well-documented association with polysplenia. Classically the azygos vein drains into the SVC. (2) Outcome therefore often depends on the other congenital abnormalities.

In conclusion, duodenal atresia and situs inversus are rare combinations. Outcome is excellent with appropriate management of possible associated abnormalities. 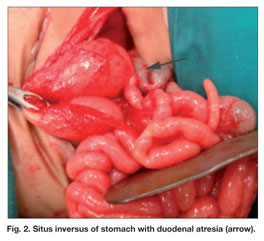 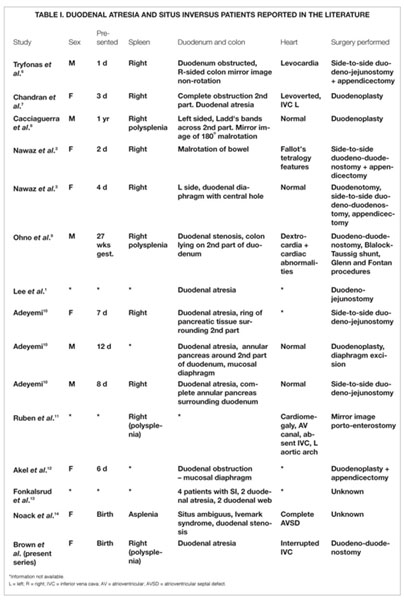