SUMMARY--We report a case of a 75-year-old female with acute torsion of the gallbladder with gangrene and cholelithiasis. On admission, the patient underwent physical examination, laboratory blood analysis, abdominal ultrasound and plain abdominal x-ray. Due to the signs of acute abdomen and poor general condition of the patient, urgent surgical procedure was indicated. Intraoperatively, the gallbladder was found to be greatly enlarged, gangrenous and greatly distended with 360[degrees] clockwise torsion around its mesentery. Cholecystectomy was performed. Gallbladder torsion is a rare surgical emergency which physicians should bear in mind when encountering patients with symptoms of acute cholecystitis. The only treatment for this condition is urgent cholecystectomy with prior detorsion. The mortality rate in patients not undergoing surgery is 100%.

Acute gallbladder torsion with gangrene and cholelithiasis is an extremely rare condition. The first case of acute torsion of the gallbladder was described by Wendel in 1989. The condition is defined as rotation of the gallbladder on its mesentery along the axis of the cystic duct and cystic artery. Real incidence is not known, but over 500 cases were reported in the last century(1). Although the etiology is unknown, different causes have been proposed. Anatomical variations of gallbladder mesentery such as long mesentery and loss of visceral fat are essential elements for development of this pathology(2,3). It can manifest at any point in life but it is most frequent in older age. Eighty-five percent of gallbladder volvulus cases occur between the ages of 60 and 80 years, and it is more frequent among women than men with a female to male ratio of 3:1(2,4,5). Preoperative diagnosis of gallbladder torsion is very difficult due to the symptoms being very similar to acute cholecystitis. It is usually diagnosed at laparotomy and treatment is always surgical.

We report a case of a 75-year-old female with acute torsion of the gallbladder with gangrene and cholelithiasis.

A 75-year-old female patient suffering from diffuse abdominal pain was admitted in the morning to the emergency department of the Rijeka University Hospital Center in Rijeka in August 2010. At the time of admission, she had a 12-hour onset of colicky, generalized abdominal pain which was strongest in the right hypogastrium and paraumilically on the right. Pain was constant, accompanied by nausea and vomiting, and did not subside at the time of admission to the emergency department. The patient had diarrhea without the presence of melena or blood. She had a longstanding history of arterial hypertension, which was regulated in a satisfactory manner. The rest of the patient's history was unremarkable. On admission, the patient underwent physical examination, laboratory blood analysis, abdominal ultrasound and plain abdominal x-ray.

Physical examination showed systolic heart murmur in the projection of ictus (2/6). Abdomen was sensitive to palpation, paraumbilically on the right and in the right hypogastrium, where extremely painful palpable mass was discovered, suspected of distended gallbladder (about 5 cm). Also, a left inguinal hernia was discovered but was unremarkable. Body temperature was normal (36.3 [degrees]C).

Due to the signs of acute abdomen and generally poor condition of the patient, urgent operation was indicated. The patient was operated on within 1.5 h of presentation to emergency department and after the above mentioned tests had been performed.

The patient was discharged from the hospital on postoperative day 8 with no complications.

There are two classifications of gallbladder torsion. According to Gross, there are two types of 'floating gallbladder'. Type I is gallbladder and cystic duct attachment to the inferior surface of the liver via the mesentery. In type II, only the cystic duct is attached to the liver(6). According to Carter, there are also two types of gallbladder torsion based on the degree of rotation. 'Complete' type has rotation that exceeds 180[degrees] and natural detorsion is impossible; 'incomplete' type has degree of rotation less than 180[degrees] and natural detorsion is possible(2,7). Based on these two classifications, our case could be classified as Gross I and Carter 'complete' type. 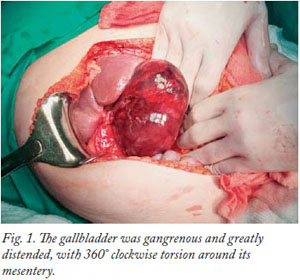 In our patient, the presence of gallstones was discovered, which usually do not not occur in this condition. In fact, gallstones were found in only 24% of patients with gallbladder torsion(2,8).

Gangrene of the gallbladder is the result of a vascular disorder that occurs after torsion. It involves ischemia that leads to wall infarction and subsequent ischemic necrosis, which then becomes a good feeding ground for varieties of bacteria such as Clostridia, Escherichia coli, Klebsiella and Streptococci(9). It causes local neutrophil aggregation, as well as systemic response in terms of elevation of WBC count and CRP concentration, as was the case in our patient. Rupture of the gallbladder can then occur and cause bile peritonitis, which has a high mortality rate. The only way to treat torsion of the gallbladder is cholecystectomy. Mortality of patients who do not undergo operative procedure is 100% versus only 3%-5% when cholecystectomy is performed promptly(10).

The causes and precipitating factors for gallbladder torsion are sudden body movement, blunt abdominal trauma, vigorous peristalsis of the adjacent viscera, cholelithiasis with acute dilatation of the gallbladder, atherosclerosis of the cystic artery, kyphoscoliosis, loss of elastic tissue, visceroptosis, liver atrophy, loss of visceral fat and elasticity, and thin patients(1,3). Three triads for the higher risk of gallbladder torsion development have been proposed. First is a triad of patient characteristics consisting of thin, old patient with spine deformity. Second is a triad of symptoms including short history, early onset of vomiting, and abdominal pain. Third is a triad of physical signs consisting of abdominal mass, lack of toxemia or jaundice, and discrepancy of pulse and temperature(2,5).

Preoperative diagnosis of gallbladder torsion is very difficult due to the symptoms being very similar to acute cholecystitis and therefore most cases are diagnosed intraoperatively(8). Kitagawa et al. propose the following diagnostic imaging criteria: fluid collection between the gallbladder and the liver bed that indicate 'floating' gallbladder; horizontal alignment of the long axis of the gallbladder that indicates freely suspended gallbladder; well-enhanced cystic duct situated on the right of the gallbladder; and thickening of the gallbladder wall that suggests inflammation or ischemia(11). Laboratory evaluations are usually not specific. WBC count, CRP and creatinine phosphokinase could be elevated with normal liver function tests(8). 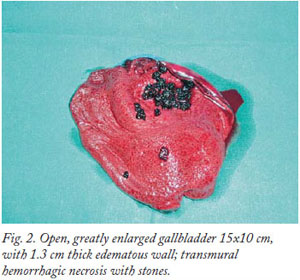 In conclusion, acute gallbladder torsion is an extremely rare condition and surgical emergency. It should be taken in consideration when encountering patients with symptoms of acute cholecystitis, because the condition is associated with 100% mortality if left untreated.