Tolosa-Hunt syndrome (THS) is a painful, usually unilateral ophthalmoparesis or ophthalmoplegia caused by nonspecific inflammation (granulomatous or nongranulomatous) of the cavernous sinus or superior orbital fissure. Constant or episodic severe retro-orbital or periorbital pain is the initial feature of THS that usually resolves spontaneously but tends to relapse and remit. Double vision (diplopia) related to ophthalmo-paresis or disordered eye movement occurs when cranial oculomotor (III), trochlear (IV), and abducens (VI) nerves are damaged by granulomatous inflammation. Evidence of incomplete third nerve palsy with or without pupillary sparing may be present. Ptosis may be observed due to oculomotor palsy (1). The etiology of THS remains unknown, although it might be commonly related to trauma, neoplasm, aneurysm, and inflammation. It is known that THS responds well to systemic corticosteroid therapy, due to relapsing and remitting course. THS is rare during the first 2 decades of life and afterwards it appears to have an even distribution. According to the International Headache Society 2013 classification, THS is described as unilateral orbital pain associated with paresis of one or more of the third, fourth and/or fifth cranial nerves caused by granulomatous inflammation in the cavernous sinus, superior orbital fissure or orbit. Diagnostic criteria for the diagnosis of 13.7 THS, defined by the 3rd edition of the International Classification of Headache Disorders (ICHD-3), include: A. Unilateral headache fulfilling criterion C; B. Both of the following: 1) granulomatous inflammation of the cavernous sinus, superior orbital fissure or orbit, demonstrated by MRI or biopsy; 2) paresis of one or more of the ipsilateral third, fourth and/or fifth cranial nerves; C. Evidence of causation demonstrated by both of the following: 1) headache has preceded paresis of the third, fourth and/or sixth nerves by [less than or equal to]2 weeks, or developed with it; 2) headache is localized around the ipsilateral brow and eye; and D. Not better accounted for by another ICHD-3 diagnosis (2). Pupillary dysfunction is related to injury of sympathetic fibers in the cavernous portion of internal carotid artery (ICA) or parasympathetic fibers that surround the oculomotor nerve. Inflammatory involvement of the sympathetic nerves passing through the interior of the cavernous sinus may produce Horner syndrome with miosis. The combination of unilateral oculomotor palsy and Horner syndrome increases the localization specificity for the cavernous sinus. Some reported cases of 13.7 THS had additional involvement of the fifth nerve (commonly the first division) or optic, seventh or eighth nerves. Sympathetic innervation of the pupil is occasionally affected. Trigeminal nerve involvement of first division (primarily V1) may cause paresthesia of the forehead. Evidence of trigeminal nerve involvement is suggested by loss of the ipsilateral corneal reflex. Lid swelling is more likely to occur with orbital disease rather than inflammation limited to the cavernous sinus. Also, mild proptosis and/or optic disc edema may be noted if the orbit is involved. Pathologic involvement beyond the cavernous sinus, superior orbital fissure, or apex of the orbit occurs rarely, and the disorder is part of a continuum with idiopathic orbital pseudotumor, with which it shares histopathology features. A single pathognomonic characteristic of THS does not exist, thus it is often considered as a diagnosis of exclusion. Many of the processes that are found within the differential diagnosis of THS include tumors, vasculitis, basal meningitis, sarcoidosis, diabetes mellitus, and ophthalmoplegic migraine.

A 54-year-old man was admitted to the Neurology Department, Sestre milosrdnice University Hospital Centre, due to severe frontal headache and right-sided periorbital pain, with the right eyelid ptosis and paresis of the right oculomotor cranial nerve. At admission, the patient was complaining of the right-sided supraorbital pain that expanded into the infraorbital area. During history taking, the patient reported that he had previously been hospitalized twice due to frontal headache, double vision and right-sided eyelid ptosis at neurology and ophthalmology departments, several months before. Medical history data revealed that in spite of the broad neurological and diagnostic examination, diagnosis has not been derived. After being discharged from the hospital, the patient experienced partial spontaneous regression of symptoms, without any treatment applied. At the current admission, the patient denied having nausea, fever, or recent head trauma. Alternative medical history was unremarkable and tick bite was excluded. The patient declared as non-smoker but acknowledged the habit of occasional, socially acceptable drinking. Previously established therapy schedule included ibuprofen as needed, duloxetine daily, acetylsalicylic acid daily and ophthalmic formulation of tobramycin solution, twice a day. The patient denied possible allergy to medications. Physical and neurological examination performed at admission verified upper right-sided eyelid ptosis, right-sided oculomotor cranial nerve palsy and partial right-sided abducens nerve palsy without nystagmus (Fig. 1). Emergency cranial multi-slice computed tomography (MSCT) was reported normal, without any detectable pathological morphological substrate. Laboratory analysis included hematologic tests (complete blood count, serum chemistry, erythrocyte sedimentation rate, C-reactive protein), and the findings were normal. During hospitalization, contrast enhanced magnetic resonance imaging (MRI) with different sequences was performed. Post contrast T1 MRI weighted images detected diffuse enhancement in the area of the right cavernous sinus, extending basally towards the trigeminal cave and anteriorly towards the apex of the right orbit, with right-sided temporal-basal dural sheath imbibition and along the clivus. Hypointense signals were detected in the area of the right cavernous sinus and Meckel's cave on short tau inversion recovery (STIR) and T2 MRI weighted images (Figs. 2, 3 and 4). In differential diagnosis, lesions were suggesting a nonspecific inflammatory reaction or granulomatous inflammation or possible lymphoid proliferative disease.

Cranial 3D time-of-flight (TOF) magnetic resonance angiography (MRA) finding was normal without any detectable aneurysm, vascular malformation or significant stenosis in the cavernous or vertebral-basi-lar area. Analysis of cerebrospinal fluid (CSF) showed proper function of the blood-brain barrier and the existence of oligoclonal immunoglobulin G (IgG) bands, without intrathecal synthesis, suggesting a systemic immune response. Immunohistochemistry analysis of tumor markers (TPA, CEA, CA 19-9, CYFRA 21-1) and laboratory analysis of thyroid hormones showed normal values, but the analysis of circulating immune complexes in the serum showed elevated titers of immunoglobulin IgG and IgM. Thus, the patient was referred to hematologist who suggested further diagnostic evaluation for possible vasculitis existence. Neuro-physiology examination included blink reflex and evoked potential testing: visual evoked potential (VEP), brainstem auditory evoked response (BAER) and somatosensory evoked potentials (SSEP). Findings of the tests performed were all normal except for SSEP of the median nerve that showed bilateral somatosensory stimulus transfer dysfunction at the level of the thalamus and somatosensory cortex. The patient was referred to ophthalmology examination and visual field analysis, which indicated narrowing of the right visual field above that corresponding to the eyelid ptosis. Systemic intravenous corticosteroid therapy with 1 000 mg methylprednisolone was administered for 3 consecutive days, along with gastroprotective therapy and continuous monitoring of steroid-related adverse effects. Systemic intravenous corticosteroid therapy resulted in complete regression of symptoms and the patient was discharged from the hospital for home care. He was recommended to take oral corticosteroids daily, according to the following tapering-off scheme: methylprednisolone 80 mg for 10 days, then 64 mg for 14 days, followed by 32 mg for 14 days, then 16 mg for 14 days, and finally methylprednisolone 8 mg. At neurological follow-up examination performed 3 months later, the patient was still complaining of blurred vision on the right eye, subjectively. Neurological and ophthalmological examination was performed and was regarded normal. Follow-up contrast enhanced MRI of the brain was performed and showed significant regression of the post-contrast signal intensity in the right cavernous sinus, previously extending basally towards the trigeminal cave and anteriorly towards the apex of the right orbit, with right-sided temporal-basal dural sheath imbibition and imbibitions along the clivus (Fig. 5). The patient was suggested to continue with oral corticosteroid therapy and recommended 4 mg methylprednisolone daily, and has not experienced relapse ever since. 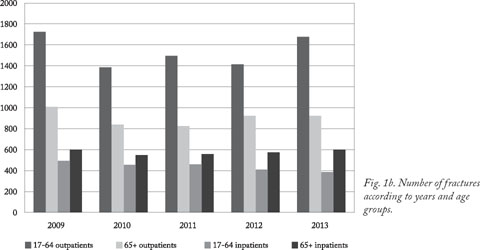 This case report presents the patient diagnosed with THS after extensive neurodiagnostic and MRI evaluation, which was the most important diagnostic tool in deriving the diagnosis of THS. Follow-up contrast enhanced MRI of the brain, performed 3 months after corticosteroid therapy administration, revealed complete regression of the pathologic substrate, thus confirming the efficacy of corticosteroid treatment. The study based on data from THS studies published from 1999 to 2007 examined credibility of the ICHD criteria for THS diagnosis. Study results confirmed that definitive diagnosis of THS should be based on brain MRI, which was positive in 92.1% of THS patients because regression of symptoms was confirmed in only 2% of patients within 72 hours after corticosteroid therapy application. Data analysis of the possible inflammatory process localization included not only the cavernous sinus, but also the orbit (THS plus syndrome or pseudotumor) (3). Furthermore, MRI analysis showed residual signs of inflammation after the symptoms had subsided, thus suggesting that inflammation might be present up to several months after regression of symptoms. Depending on the inflammatory infiltrate location, patients might present with various nonspecific symptoms that include nerve compression in cavernous sinus, partial or complete ophthalmoplegia indicating superior orbital fissure involvement, or loss of vision indicating optic nerve involvement; isolated trochlear nerve paresis has also been described (4). Alternative diagnosis also included an extracranial dural metastatic neoplasm lesion, imitating meningioma that required surgical removal procedure. The major limitation of MRI findings in THS is their lack of specificity. A study that examined 11 patients has reported pathologic MRI findings in the cavernous sinus in nine patients. In six of these nine patients, the affected cavernous sinus was enlarged, and in five of nine patients it had a convex lateral wall. Extension into the orbital apex was seen in eight patients. Yet, the signal characteristics (hypointense relative to fat and isointense with muscle on T1 weighted images; isointense with fat on T2 weighted scans) were also consistent with meningioma, lymphoma, and sarcoidosis. Extensive diagnostic evaluation is warranted to exclude alternative causes of painful ophthalmoplegia and to confirm THS diagnosis (5). Therefore, diagnostic processing usually includes complete laboratory work-up, thyroid hormone analysis, brain MRI and MRA, lumbar puncture and CSF analysis, vasculitis assessment, an ophthalmologist and otolaryngologist examination, x-ray of the heart and lungs, abdomen ultrasound, and finally biopsy of the lesion previously verified by brain MRI. The above is important for the successful treatment of THS and other differential diseases. In the literature, one can find different doses of corticosteroids applied for THS treatment because there are no specific guidelines for the THS therapeutic approach. During hospitalization, our patient had partially recovered spontaneously, but after systemic corticosteroid treatment, regression of symptoms was complete. We treated our patient with the intravenously applied corticosteroid therapy with 1 gram of methylprednisolone daily, applied for 3 consecutive days. Following systemic therapy, the patient was tapered down to lower doses of corticosteroids, applied orally. Some authors used lower doses of oral corticosteroids (60 mg or 125 mg), and had positive therapeutic response (6). When corticosteroids are contraindicated or serious side effects are present, corticosteroid treatment should be discontinued. Patients on long-term corticosteroid use and persistent or recurrent symptoms could be treated with azathioprine, methotrexate or radiation therapy (7-9). Literature data show that symptom regression and normalization of MRI findings occur faster in patients treated with high-dose corticosteroids in comparison to low-dose corticosteroids, although the difference was not statistically significant. Recurrence of symptoms was recorded in 44.2% of patients treated with low-dose corticosteroids, as opposed to 10% of patients treated with high-dose corticosteroids, suggesting the importance of patient follow-up (10). Patient observation during therapy application, continuous follow-up and cranial MRI follow-up with the focus on the cavernous sinus and orbital apex is recommended in the evaluation of THS symptom regression and therapeutic efficacy (11-15). 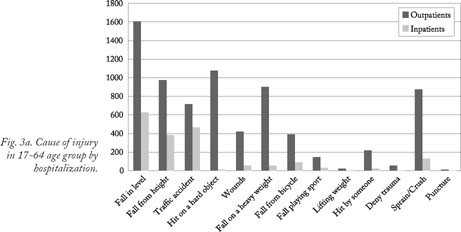 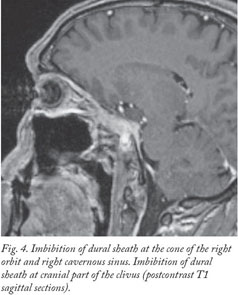