Do you ever act before thinking? Have you ever wondered why? Do you worry this might create problems? If you answered "yes" to any of these questions, read on.

Picture this: Your finger is poised on the send button, your eyes scanning an angry e-mail you've dashed off to a friend who has upset you. Some things you've written are a little harsh. In your brain a little red light goes off, but, what the heck, you're steamed and your friend deserves it. You push the button.

Whether you're aware or not, rushed decisions like this--acting before thinking it through--happen more often in teens than in adults. Recent discoveries in brain science may help explain why this is so.

First, a bit on how a brain makes decisions. Decisions don't "just happen" automatically in your conscious mind. They stem from a series of events in the brain, which happen almost instantaneously. This involves a relay system in which different structures--made up of specialized cells called neurons--talk with each other by way of electrochemical impulses and chemical messengers, called neurotransmitters. Information flowing through this decision-making circuit is analyzed in the different structures. Then the network, as a whole, puts out a response. This output provides the basis for our behaviors and actions.

While this process is basically the same for teens and adults, the devil is in the details. Since the brain is not fully developed until the early 20s, the way in which a teen's decision-making circuit integrates information may put him or her at a higher risk of making decisions the teen could later regret.

THE TEEN BRAIN: Under Construction

Not long ago, scientists thought the human brain was fully mature long before the teen years. While research shows that one's brain reaches its maximum size between ages 12 and 14 (depending on whether you are a girl or a boy), it also shows that brain development is far from complete. Regions of the brain continue to mature all the way through a person's early 20s. 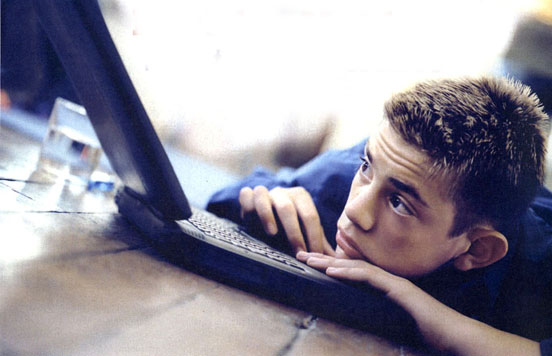 A key brain region that matures late is the prefrontal cortex, located directly behind your forehead. The prefrontal cortex is very important as a control center for thinking ahead and sizing up risks and rewards. (This area is, in fact, the little red light that was trying to warn you about sending that e-mail.) Meanwhile, another part of the brain that matures earlier is the limbic system, which plays a central role in emotional responses.

Since the limbic system matures earlier, it is more likely to gain an upper hand in decision making. This relationship between the emotional center (limbic system) and control center (prefrontal cortex) helps to explain a teen's inclination to rush decisions. In other words, when teens make choices in emotionally charged situations, those choices are often more weighted in feelings (the mature limbic system) over logic (the not-yet-mature prefrontal cortex).

This is also why teens are more likely to make "bad" choices, such as using drugs, alcohol, and tobacco--all of which pose a risk of serious health consequences. "Most kids don't really 'plan' to use drugs,' says Professor Laurence Steinberg of Temple University, "at least not the first time. They are more likely to experiment on the spur of the moment, particularly when influenced by others [peer pressure]."

Like the rest of the body, the brain needs to mature in order to reach peak performance. This process involves slow changes--strongly influenced by brain activity--that have evolved to fine tune (or optimize) how neural impulses flow throughout the brain, allowing it to process information faster and more reliably.

Inside the brain, information travels through a network of neurons, which have thread-like fibers called axons and branch-like structures called dendrites. Dendrites bring information into the neurons, while axons take it away and pass it along to the next neuron. Thus, neurons are assembled into circuits where the far end of an axon (its terminal) is positioned close to a dendrite. The small space between the two is called a synapse--where information is exchanged.

Throughout childhood and adolescence, the brain is busy fine-tuning itself through two key processes: myelination and synaptic pruning.

In myelination, axons wrap themselves in a fatty substance (myelin sheath), which works like the insulating plastic that surrounds electrical wires. This boosts the brain's efficiency by increasing the speed with which a signal travels down the axon by up to 100 times. In synaptic pruning, synapses not used very often are removed, allowing the brain to redirect precious resources toward more active synapses. This strategic loss of weak synapses shapes the brain and makes it more efficient. This important pruning process molds the brain in response to a person's experiences and activities.

This means that teens have the potential, through their choices and the behaviors they engage in, to shape their own brain development--strengthening some circuits and getting rid of others. This makes the type of activities teens are involved in especially important. Skill-building activities, such as many physical, learning, and creative endeavors, not only provide stimulating challenges, but can simultaneously build strong brain pathways. When teens learn and repeat appropriate behaviors, they are helping to shape their brains--and their futures.

Learning how your brain works can help explain why sometimes you behave like you do. With this knowledge, you can be better equipped to make smart choices.

One tip to follow is to take a moment before acting. When making a decision, something as simple as stopping to think can mean the difference between a positive and a negative outcome. By waiting a minute before acting, you allow yourself to: 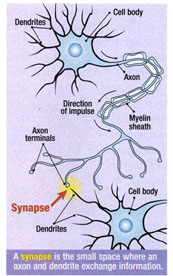 * weigh harmful outcomes (e.g., harm to yourself or others) against short-term benefits (e.g., fitting in or feeling high);

* determine whether peer pressure is making you do something you'd otherwise not do;

* get information or advice, if you need it.

For more information about drugs and your body, visit http://teens.drugabuse.gov and www.scholastic.com/headsup.

To learn more about "pausing" to allow yourself to make smart choices, check out www.myspace.com/pause.

Vocabulary Match each word in Column A to its meaning in Column B.

A. brain area important for thinking ahead and sizing up risk and reward

B. process in which axons become wrapped up in fatty myelin sheath

D. the small space between axons and dendrites where neurons exchange information

E. cutting back the number of synapses