Propaganda and the News

PROPAGANDA AND THE NEWS

When, in 1934, Nazis seized the government of Austria, their first act was to occupy not a government building but a radio station. The act symbolized the new importance the control and dissemination of information had in modern political life. News control and propaganda were central to the success of authoritarian states. By 1940 many members of the U.S. media were expressing deep concern about the control of the news and the effectiveness of propaganda, which was commonly defined as the manipulation of news and information for political purposes. Stalinist Russia and Nazi Germany used the new technology of cinema to rally the masses; the Fascist governments of Italy and Germany used the even newer technology of radio to garner broad support for their policies; everywhere in war-torn Europe censors imposed themselves on journalism. How propaganda worked was the subject of great discussion, and media analysts argued pointedly about the relationship between propaganda and unbiased news. It was not an abstract debate. Radio rabble-rousers, such as conservative commentator Fr. Charles Coughlin, already enjoyed large audiences in the Midwest; critics of the Roosevelt administration hinted that FDR's successful fireside chats over radio, as well as the industry regulation of the FCC, were signs of impending dictatorship. 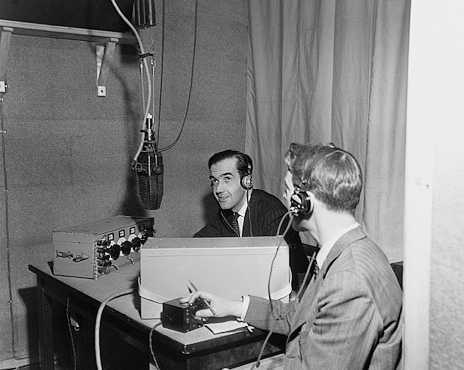 Edward R. Murrow broadcasting news of the Allied invasion of France. Besides him is the military censor, his hand on the switch that would interrupt the transmission if he felt necessary. © Corbis-Bettmann. A well-orchestrated media campaign, filled with bald distortions, had destroyed Upton Sinclair's 1934 run for governor of California. Reporting from Europe, journalists and broadcasters found it difficult to adhere to an unbiased and objective presentation of the news. During the Spanish civil war of 1936-1939, H. V. Kaltenborn waxed indignant over Fascist atrocities in his radio broadcasts for CBS; the Hearst press, distorting events in Spain, cast Francisco Franco's Fascists as "insurgents" and the Republican government as "reds." Eric Sevareid, witnessing the fall of France, felt a complacent press was much to blame and urged CBS to abandon neutrality in reporting European events. Other European correspondents, who repeatedly saw their reporting lost to censors, were all too aware of how the objective press could be turned to partisan ends. For journalists and broadcasters in the late 1930s, the boundaries between news and propaganda were indistinct.

Some in the U.S. media were not troubled by the blurry distinction between news and propaganda. The Hearst press was famous for its sensationalism and distortion; the Luce publishing empire readily acknowledged that its presentation of the news reflected the bias of its publisher. Luce argued that the mere selection of one news item over another reflected bias and that an objective presentation of the news was impossible. Most industry insiders agreed with Luce but nonetheless strove for balance and fairness in the presentation of the news. In part this struggle represented a philosophical commitment to fairness, but it also reflected commercial and political realities. Overt editorializing sometimes cost a network commercial sponsors and carried the risk of intervention by offended politicians. CBS was the first of the major networks to institutionalize fairness as part of its broadcasts. It often sponsored a roundtable of opposing viewpoints following the broadcast of important events, and it demanded low-key, dispassionate reporting of its journalists. ("We must not display a tenth of the emotion that a broadcaster does when describing a prize fight," explained Sevareid.) Edward R. Murrow's broadcasts from besieged London made the style famous. Murrow's reports were not exactly objective, and he himself sought to sway the sentiment of Americans toward intervention in the war on the side of the British. But the CBS style was subtly understated and enormously effective. The other broadcast networks followed suit. In 1940 NBC and the Mutual network issued a joint statement forbidding their war correspondents from efforts "to influence action or opinion of others one way or another." In 1941 such a position became law, as the FCC, ruling on a licensing request from a Boston station, declared, "A truly free radio cannot be used to advocate the causes of the licensee.…"

Censorship and the War

The relationship between news and propaganda became more complex after Pearl Harbor. Although some suggested that the U.S. media should be nationalized and controlled by the government for the duration of the war, government intervention in the media was limited. It did create several agencies to monitor the press. The Office of Facts and Figures, under Archibald MacLeish, had been created before the war to combat the distortion of news in the media. The Office of War Information had a similar function after its creation in 1942 and additionally monitored shortwave broadcasts to ensure that important military secrets were not revealed. The War Department refused to permit the publication of photographs showing dead U.S. soldiers. The Office of Censorship under Byron Price closed amateur radio stations for fear of espionage broadcasts and forbade the transmission of weather news or the announcement of troop, ship, or plane movements. It also abolished man-on-the-street interviews, fearing that spies would send coded information in ad-lib form.

Aside from these measures, however, the Office of Censorship relied on voluntary censorship by the media. Government officials feared that heavy-handed censorship would be viewed as a Fascist attempt to manipulate opinion, obscuring the differences between democracy and authoritarian rule. More important, policy makers feared a political backlash against the war effort if heavy censorship was invoked. While enemies of the nation's black press, for example, sought to use the war emergency to shut it down, Attorney General Francis Biddle feared the consequences of such an act on the morale of African Americans, who were making vital contributions to the war effort. Government officials, moreover, trusted that the prowar consensus that swept the public with Pearl Harbor would be reflected in the press.

They were not disappointed. Editors and broadcasters took seriously the Office of Censorship guidelines not to betray military movements or undermine morale. Newspapers and radio stations regularly submitted stories to the Office of Censorship for approval and tightened journalistic standards to ensure that information was safe for publication. Censorship had the effect of making the distinction between propaganda and news sharper because it demanded greater accuracy in reporting. No longer would lazy reporters cite "informed sources" or "reliable informants" in their news stories without verifying the information. The war made the U.S. press fairer and more judicious.

THE BOYS IN THE BASEMENT

Often criticized and sometimes grudgingly admired, Franklin Roosevelt's innovative use of radio was a persistent thorn in the side of his political opponents. This was never more the case than at the Democratic National Convention in Chicago in 1940. Roosevelt's strategy for running for an unprecedented third term as president was to appear reluctant, suggesting that it was grassroots support, rather than ambition, which led him to the hustings. FDR did enjoy considerable support among the delegates, much of it, however, half-hearted—and that made for a moribund convention. Listeners, however, heard the convention enthusiastically draft Roosevelt. Mayor Kelly of Chicago, a partisan of FDR, packed loyal supporters into the basement of the convention hall. Their cheers at the mention of Roosevelt's name, picked up by strategically placed microphones, were broadcast over loudspeakers and over the radio—generating a sense that the convention's endorsement of Roosevelt was spontaneous and whole-hearted.

At the same time the press was codifying a new set of journalistic ethics, the government was refining its propaganda efforts, learning much from foreign propaganda broadcasts. In 1941 the FCC established the Foreign Broadcast Intelligence Service to monitor and transcribe German and Japanese propaganda aimed at the United States. In turn the War Department directed propaganda broadcasts at Germany and Japan. Transmitted from British Broadcasting Corporation (BBC) equipment in England, and on mobile units operated by the military in the Pacific, U.S. propaganda broadcasts were under the supervision of the Psychological Warfare Branch (PWB) of the Office of War Information. PWB specialized in two types of broadcasts: the first, "white" broadcasts, were aimed to demoralize the enemy and undermine their morale; the second, "black" broadcasts, imitated Axis transmissions, and sought to confuse the enemy during military operations. PWB's most successful white broadcast was a daily series entitled Briefe die sie nicht erreichten (Letters That Didn't Reach You), wherein announcers read letters by demoralized German soldiers to the Nazi homeland. Their most famous black radio project was a 1944 broadcast from Radio Luxembourg that purported to be an official German station. During the invasion of the German heart-land, this station broadcast misinformation regarding the offensive and created widespread panic in cities far from the actual military operations.

Following the war, the debate over fairness and objectivity in the news continued. During the war, labor unions repeatedly complained that radio stations denied them access to air and advertising time on the grounds that their perspectives were partisan. Broadcasters also routinely denied air and ad time to Communist groups, arguing that the Smith Act of 1940 made Communists an illegal partisan group. Right-wingers, on the other hand, continued to slant the news in ways that were frankly propagandistic. The most notorious example was that of the radio network owned by Detroit businessman George Richards. A virulent anti-Semite, who derided President Roosevelt as a Communistic "Jew-lover," Richards demanded his station managers twist the news to accord his particular sensibility. His activities were so authoritarian that in 1948 a group of journalists formerly in the employ of Richards protested to the FCC about his tactics. The FCC began hearings to consider suspending Richards's radio licenses, taking testimony from scores of witnesses that he forced them to slant and falsify news. Richards spent over $2 million to maintain his stations before, at the height of the controversy, he died. His widow pledged not to interfere in the presentation of the news, and the Richards family was allowed to retain its radio stations.

The FCC indulged Richards because it had concluded that unbiased presentation of the news was impossible. By 1946 it had begun to roll back its 1941 decision prohibiting journalistic advocacy. Issuing a blue-covered report entitled Public Service Responsibility of Broadcast Licensees, it established new guidelines for programming acceptable to the FCC. Taking note of the de facto censorship of labor from the airwaves, it obliged broadcasters to present a balanced presentation of the news rather than maintaining strict neutrality (often violated in practice). More important, it required broadcasters to meet their public obligations by being increasingly responsive to local needs, by limiting commercial advertising, and by increasing public-affairs programming. Although many broadcasters protested the guidelines found in the FCC's "blue book," many media leaders, including William S. Paley of CBS, had suggested similar ideas. Paley, who had often insisted that news be unbiased, concluded during the war that commentary and editorial opinion were permissible so long as they were clearly presented as distinct from the news. His solution became that of the FCC. In 1949 it thoroughly reversed the 1941 decision and permitted explicit editorial commentaries by journalists, so long as opposing viewpoints were presented. This ruling became the basis of the later "fairness doctrine," which sought to maintain political diversity by forcing broadcasters to present all sides. News, in other words, should strive to be objective, but it could be propagandistic so long as a plurality of opinion was presented. 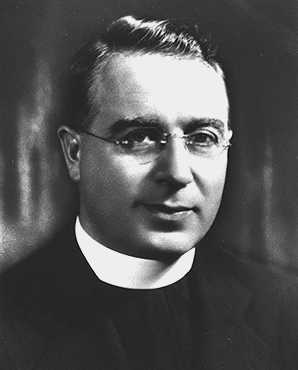 Farther Charles E. Coughlin (1891–1979) was a controversial and influential figure who was one of the first to use the power of the radio to stir millions as his messages blurred politics, religion, and mass media entertainment. AP/Wide World Photos. Reproduced by permission.