Peter Heller, an adventure writer based in Denver, is the award-winning author of literary nonfiction books, including Kook: What Surfing Taught Me About Love, Life and Catching the Perfect Wave; Hell or High Water: Surviving Tibet's Tsangpo River; and The Whale Warriors: The Battle at the Bottom of the World to Save the Planet's Largest Mammals. The Dog Stars is his first novel.

THE STORY: In a postapocalyptic Colorado, a devastating flu killed 99 percent of the human population nine years before. After the loss of his pregnant wife, Hig, along with his aging dog Jasper, squats in the abandoned hangar that holds his beloved 1956 Cessna, his only company the rugged, gun-toting Bangley. A former contractor and poet, Hig spends his time guarding his stash of food and weapons from intruders, flying the perimeter of the airfield, and remembering the streams he used to fish. But one day, tired of his solitude, he recalls a radio signal he heard from Grand Junction. In his Cessna (copilot: dog), Hig decides to investigate and ventures out into the great unknown--and to the point of no return--in the hopes of, just possibly, experiencing love, friendship, human connection, and the natural world once again.

"Lest you think this book is only about physical survival let me assure you that Hig finds himself nearly overrun by memories of life before the epidemic, mainly his love for his late wife, whom he, at her pleading behest, dispatched in her hospital bed with a pillow--memories no weapon can defend against. Peter Heller serves up an insightful account of physical, mental, and spiritual survival unfolded in dramatic and often lyrical prose, a difficult tale in which unexpected hope persistently flickers amid darkness." ALAN CHEUSE

"When Hig takes his plane into the wilderness surrounding the airport, The Dog Stars can feel less like a 21st-century apocalypse and more like a 19th-century frontier narrative (albeit one in which many, many species have become extinct)." RON HOGAN

"The first half of The Dog Stars makes a persuasive case that the most horrifying fate after the collapse of civilization might actually be having a modicum of comfort--because of the things you'd have to do to preserve it. ... I won't give away what happens in the second half of the book--but suffice to say that it gets considerably less disturbing and horrifying in the second half." CHARLIE JANE ANDERS 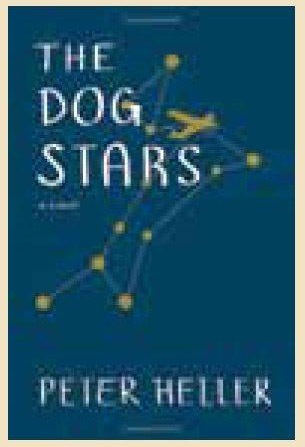 "Clearly influenced by Cormac McCarthy's The Road, The Dog Stars is a heart-wrenching and richly written story about loss and survival--and, more important, about learning to love again. ... It's an ode to friendship between two men, a story of the strong bond between a human and a dog, and a reminder of what is worth living for." MICHELE FILGATE

"The pages of The Dog Stars are damp with grief for what is lost and can never be recovered. But there are moments of unexpected happiness, of real human interaction, infused with love and hope, like the twinkling of a star we might wish upon, which makes this end-of-the-world novel more like a rapturous beginning." CAROLINE LEAVITT

"Heller ... crafts The Dog Stars in a jittery, abrupt first-person narrative whose rhythms at first seem problematic, perpetually stopping and starting like a plane in trouble sputtering along a runway. ... But as you read along, you get caught up in the offbeat rhythms, and they start to seem like a way that a lonely man would speak in the darkness, haltingly, finding comfort in shaping his story to his own voice, letting the story take as long as it needs to." MOIRA MACDONALD

With debts to Cormac McCarthy's The Road and other postapocalyptic novels of the past decade, The Dog Stars seemingly focuses on loss and survival in a brutal, devastated landscape. But as Hig's emotional state shifts as memories of his past life threaten to engulf him, as he copes with survival (and the violent acts it often entails), and as he journeys into unknown territory to try to discover life again, it becomes clear that The Dog Stars is literary fiction of the highest caliber. Written in a spare, abrupt first-person narrative, the prose initially turned off a few critics. But they soon warmed to Heller's striking images of nature and technology (guns, planes, and the like) and Hig's deep, near-poetic introspection. It's "a pretty simple story," writes io9.com, but with its superb characterization and elegiac tone, this postapocalyptic novel stands out.