Pivotal role: a house elf in the latest Harry Potter film is one of a group of digital characters who play increasingly important parts in movies

And the Oscar for Best Supporting Actor goes to ... Dobby, the House Elf?

It might sound far-fetched to some. But considering the role this 3D character played in Harry Potter and the Chamber of Secrets, the day when CG characters compete against live actors for excellence in filmmaking achievement may be closer than you think.

"Dobby is a special character," says Doug Smythe, associate visual effects supervisor at ILM, the facility responsible for his creation. "He's special not so much because of his screen time, which was 75 shots, or 10 to 12 minutes of animation. It's more the role he plays. It's pivotal. He knows why Harry Potter must leave the Hogwarts School of Witchcraft and Wizardry. It's an important part of the story."

"The biggest innovation in this project is that Dobby's like a real actor," adds Dave Andrews, animation director. "He's photoreal, he's acting alongside Daniel Radcliffe, who plays Harry, and he exhibits the subtlety of a real actor. He's the new bar at ILM against which future characters will be compared."

Creating such a character required the use of powerful commercial and proprietary software, some of it written or enhanced specifically for the film.

Digital Dobby began life as a dense point cloud of data, explains Symthe. "Gentle Giant Studios cyberscanned a maquette of Dobby, and we used in-house surfacing tools, plus Alias|Wavefront's PowerAnimator and in-house sculpting software, to shape the data into the form we needed."

Next, the team rigged the model in Softimage|3D, and used new multi-weight enveloping software developed by ILM's Corina Wang to ensure that all Dobby's body parts would move correctly and maintain their shape during animation. "The software remembers how parts should move and blend from pose to pose," Smythe explains. "You don't have to dial anything in manually once it's set up." Using the maquette as reference, ILM's Jean-Claude Langer textured the model with the company's Viewpaint software. 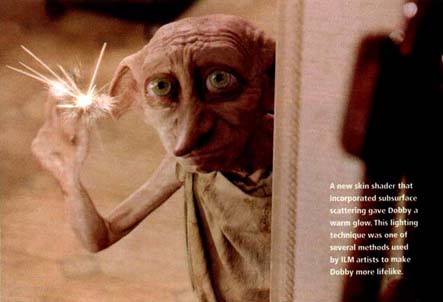 Dobby, a slave to a cruel family, has only a tattered, ill-fitting pillowcase to wear in lieu of clothes. For the Dobby team, creating that pillowcase required the use of proprietary cloth simulation software. The team also used this software to create and animate bed covers for the scene in which Dobby jumps fitfully on Harry's bed. To add expression to Dobby's face and animate his mouth appropriately, the team used a comprehensive library of faces and other shapes compiled by ILM's Frank Gravatt, along with proprietary facial animation and lip-sync software.

To animate Dobby's body, the team again relied on new software. "We animated most scenes in Softimage|3D, but for a few, including the one in Harry's bedroom where you first meet Dobby, we used new in-house software that lets you pose characters intuitively," Smythe says. "In most existing software, you have inverse kinematics that let you move a foot, and the knee and leg follow. With the new system the entire body is connected, so you can pull on the foot and it will automatically pull the knee, leg, and the rest of the body intuitively. You can get interesting dynamic poses in seconds."

A new technique was also put to use for lighting and rendering Dobby. According to Smythe, this technique was the biggest single advance made for the character. He explained that the team used RenderMan and Mental Ray rendering software, as they had in previous films, but added a new skin shader that incorporates a diffuse subsurface scattering technique that simulates the way light enters a surface that is not completely opaque and reflective. "If you shine a flashlight behind your hand, the hand glows red. This happens to a slightly lesser degree when light enters from the front," he says.

"With the diffuse subsurface scattering technique, we could mimic the way light behaves as it moves inside the character," he continues. "Without it, Dobby would've looked like a marble or plastic statue. With it, we got the warmth that's been missing from CG characters. We picked up the reddish color from Dobby's imaginary circulatory system. He looks alive because he has the warmth and glow present in nature."

Of course, technology gets you only so far when creating believable CG characters. Filmmaking is still an art form that requires a high level of skill. Therefore, good artists must take time to incorporate the small details that pull off an effect. "This is the hardest part about making believable characters," notes Andrews. "We spend 60 percent of our time to get 95 percent of the way there, and the rest of our time to get to 100 percent."

By all accounts, the hard work paid off. One particularly difficult shot occurs in the hospital where Dobby visits Harry, who is recuperating from an injury suffered during a Quidditch match. At one point, Harry clutches Dobby's pillowcase. "We had to make the cloth look like it was being grabbed," Smythe says. "And later in the same shot, when Dobby touches Harry's hand and sleeve, we had to incorporate the appropriate interaction with lighting and shadows, as well as move Harry's pajama sleeve so that it would crush and compress as though Dobby were really touching it. We did things like this throughout the film. Subtleties like these make you think Dobby's a real, living being."

Also along those lines, the 15-person animation team ensured that Dobby always moved as though he were a 50-pound house elf that had been abused for years. "He's a slave; we made sure you can see it in his posture. He's protective of his body because he's always being waled on. He's always curled up in as small a space as he can occupy," Andrews says. The animators even made sure the same side of bobby's face was consistently his strong side. "His smile always curled up toward the left, regardless of whether that side of his face was in camera."

Overall, imparting realism into Dobby was the biggest challenge posed by the character. Thanks to ILM's success on that score, along with its accomplishments with Yoda in Star Wars Episode II and Weta Digital's achievements with Gollum in The Two Towers, Smythe and Andrews predict that film directors will be more willing to cast CG characters in leading roles in future.

"In 2002, we got Dobby, Yoda, and Golluin," concludes Andrews. "Digital characters are finally conspicuous in liveaction films. It's only a matter of time before the Academy starts giving out Oscars to digital actors." 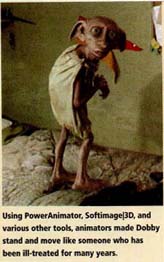 Audrey Doyle is a freelance writer living in Boston.