What does the fall of Constantinople in 1453 have to do with the exposure of a famous forgery?

For a half century before Turks took the city, the capital of the eastern Roman Empire, church scholars traveled often between Constantinople and Italy. Fearing Turkish invasion, scholars brought more than 230 ancient manuscripts back to Italy, rescuing the texts from oblivion and feeding the Renaissance with "new" ideas.

The discovery of these books led to a tremendous interest in languages and historical and contextual criticism. It also fed a new interest in discovering whether ancient documents were genuine.

Lorenzo Valla (1406-1457), a specialist in Latin translation and philology (the study of words), took an interest in examining ancient and modern authors and their style of writing. Thus he became, unwittingly, one of the first scholars to examine ancient documents for their authenticity.

Early in his career, Valla made a critical study of Jerome's Latin Vulgate, the official Bible of the Roman Catholic church. He raised troubling questions about some of Jerome's word choices, such as Latin paenitentia ("penance") for Greek metanoia (better rendered "repentance"). Valla essentially suggested that the Catholic church's entire system of penance and indulgences rested on a mistranslation! Later critics of that system, including Erasmus, used Valla's textual notes and praised his work.

Alfonso, king of Aragon, Sicily, and Naples, as well as a patron of scholarship, hired Valla as his secretary in 1435. Alfonso wished to expand his territory by annexing papal lands, so in addition to admiring Valla's intellect, he probably hoped to use the scholar as a secret weapon against the church. 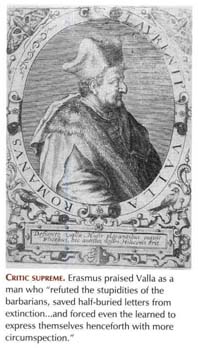 In 1440, under the king's protection from Pope Eugenius IV, Valla wrote his most famous disputation: On the Falsely Believed and Lying Donation of Constantine. He labeled the work a "ridiculous forgery" and sneered, "A Christian man who calls himself the son of light and truth ought to be ashamed to utter things that not only are not true but are not even likely."

The Donation of Constantine granted far-reaching property and privileges to the papacy, including ecclesiastical supremacy over the sees of Alexandria, Antioch, Jerusalem, and Constantinople; oversight of lands in "Judea, Greece, Asia, Thrace, Africa, and Italy and the various islands"; the Lateran palace; and several items of imperial regalia. Constantine had supposedly bestowed such lavish gifts on Pope Sylvester I to thank the pope for curing his leprosy.

Almost everyone accepted the donation as valid from the ninth century to the fifteenth. Still, Valla was not the first scholar to find the story fishy. Nicholas of Cusa had exposed the falsity of the donation in 1433, but it was Valla's lucid historical and linguistic criticism that devastated the document's defense.

Valla knew his arguments would get him into trouble. Regarding the church loyalists who judged Valla's earlier work as subversive, he wrote, "How they will rage against me, and if opportunity is afforded how eagerly and how quickly they will drag me to punishment! For I am writing against not only the dead, but the living also, not this man or that, but a host, not merely private individuals, but the authorities. And what authorities! Even the supreme pontiff."

Still, Valla pressed on, determined to expose an error he judged "an enormous one, due either to supine ignorance, or to gross avarice which is the slave of idols, or to pride of empire of which cruelty is ever the companion."

Valla's argument hangs on philological study, through which he shows that the language of the donation dates not to the fourth century, but most likely to the eighth. By that time, the papacy had established its territorial ambitions. The borders drawn in the false donation merely outlined the lands that papal forces had sought to conquer through military and political maneuvering.

The forgery was so obvious, and so recent, that Valla could advance only two reasons why dozens of popes had accepted it: "either they have not known that the Donation of Constantine is spurious and forged, or else they themselves forged it, and their successors walking in the same way of deceit as their elders have defended as true what they knew to be false, dishonoring the majesty of the pontificate, dishonoring the memory of ancient pontiffs, dishonoring the Christian religion, confounding every thing with murders, disasters and crimes."

Valla held the papacy in such low regard that he naturally leaned toward the latter explanation. Deeper into his critique, he scoffed, "Even were the Donation authentic, it would be null and void, for Constantine could have not power to make it, and in any case the crimes of the papacy would already have annulled it."

In his analysis of the effects of this historic hoax, Valla stated that from that papacy's usurpation of the temporal power had come the corruption of the church, the wars of Italy, and the "overbearing, barbarous, tyrannical priestly domination." Valla called on the people of Rome to rise up and overthrow the papal government of their city, and he invited the princes of Europe to deprive the popes of all their territorial possessions.

In the face of such an attack, the papacy could not remain silent. Besides, it controlled the Inquisition. Valla was summoned and accused of heresy. But King Alfonso ordered the Inquisition to leave Valla alone, and the case was withdrawn.

Valla continued his attacks on the church. He showed, by using basic historical and linguistic rules, that the Apostles' Creed was not composed by the apostles, but by later church leaders. Other critiques followed, but then Alfonso began to move toward reconciliation with Rome. 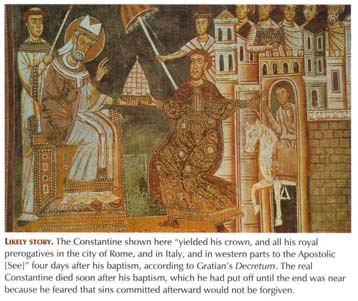 Valla, ever the deft politician, decided that he had better make peace also. He addressed a letter of apology to Pope Eugenius IV, reaffirming his orthodoxy and asking for pardon. Eugenius ignored the request, but when the next pope, Nicholas V, was looking for scholars for his new library (now the Vatican Library), he forgave Valla and made him a papal secretary in 1448. Valla finished his career as a canon of St. John Lateran (the pope's own church) and died in 1457.

Nicholas V effectively admitted the forgery of the donation when he hired Valla to be his secretary. Still, authorities suppressed Valla's disputation for decades. The first print edition did not appear until 1517, when Martin Luther and other Reformers would make great use of it.

The false donation gradually receded from prominence, though its authenticity continued to be debated in some circles until the eighteenth century. The papacy held onto the lands in central Italy granted by Pepin, in 755, until 1861, when nearly all of the peninsula united as the new Kingdom of Italy.