From 700 CE, the first large towns were built in North America. In the eastern woodlands, people created large towns around the Mississippi River valley. Filled with rectangular, flat-topped earth mounds and grouped around open plazas, they were ceremonial and administrative centers that organized the production and distribution of food and manufactured goods. Meanwhile, in the dry southwest, farmers called the Anasazi built large villages as single structures, crowded with rooms. These are called “pueblos,” Spanish for towns or villages, and the Anasazi are also known as the pueblo people. Although the mound builders and Anasazi were very different, their societies were both based on farming, with main crops of corn, beans, and squash.

MONK’S MOUND - This is the Monk’s Mound in Cahokia, today in the state of Illinois, where the Mississippi, Missouri, and Illinois rivers meet. The mound is over 100 ft (30 m) high, with a base bigger than the largest Egyptian pyramid. Unlike an Egyptian pyramid, it was made wholly of earth. The wooden building on top may have served as the home of the chief or as a council chamber. This is just one of the 100 mounds in Cahokia. 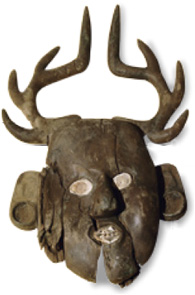 Many mounds served as tombs, where important people were buried with offerings. Archaeologists dug into the Craig Mound in Oklahoma and found a large burial area, dating from 1400 CE, with a floor that was 37 by 55 ft (11 by 17 m). It was covered with human bones and baskets filled with grave goods. Among them was this mask with deer antlers, made of red cedar wood, inset with shell for the eyes and teeth. The ears were pierced for large plugs. Similar objects have been found in mounds across the southeast, and they have been interpreted as evidence of a widespread religion, known as the Southern Cult. Another idea is that they were artifacts made in places like Cahokia that were then traded. 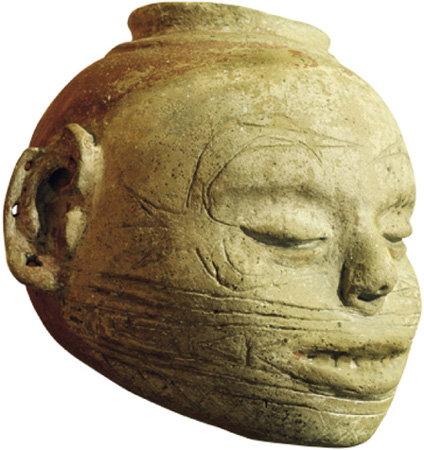 MOUND-BUILDER POTTERY - The mound-builders made pots in the form of human heads, which may represent ancestors or even trophies—the heads of enemies taken in war. The head has closed eyes, a sign that he is dead. He wears large round plugs in his ears, and the lines on his face suggest tattooing, decorative scarring, or face paint. This pot shows what the mound- builders themselves may have looked like. 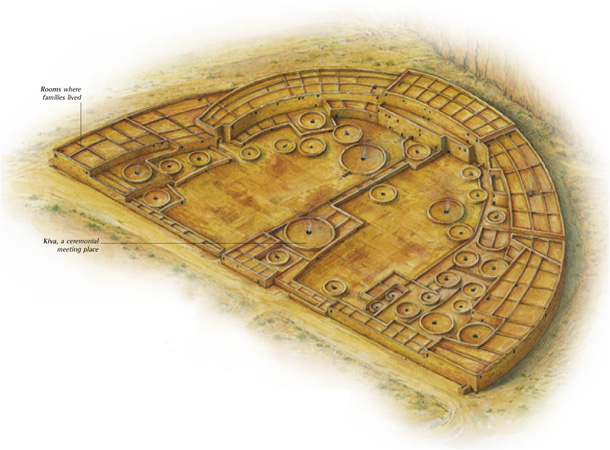 THE ANASAZI - In the southwest, Anasazi farmers built large compact villages, now called “great houses.” This is Pueblo Bonito, in Chaco Canyon in New Mexico. It is a single large structure with more than 600 rooms, like an apartment building. At the back, it was five stories high and was the tallest structure in North America until skyscrapers were built. Anasazi people lived here from 900 to 1100 . 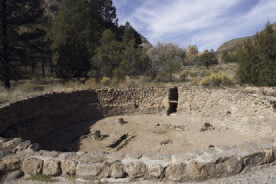 KIVAS - Anasazi sites have circular semi-underground buildings, known as kivas. Their large size, up to 65 ft (20 m) across, suggests they were public meeting places rather than houses. People may have gathered here to hold ceremonies to bring rain, luck in hunting, or a good harvest. Each kiva was covered with a timber roof covered with mud, with an opening in the middle. People entered by climbing down a ladder from the roof. 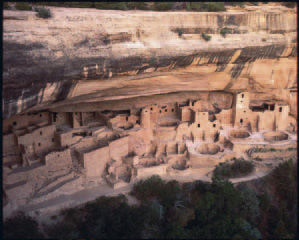 CLIFF PALACE - Around 1200, the Anasazi abandoned their villages on the floor of Chaco Canyon, and built a new, better-protected settlement, known as the Cliff Palace, high in a canyon wall. They climbed up using hand and toe holes cut into the rock face. Soon after 1300, the Cliff Palace was abandoned too. Tree rings from timbers here show that there was a 22-year drought, between 1276 and 1299. This disaster may explain the abandonment of the Cliff Palace. 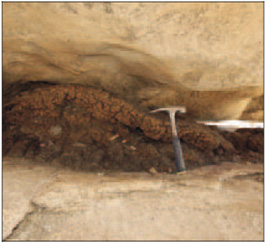 Archaeologists learned about the end of the Anasazi by studying the nests or middens (garbage dumps) of pack rats. Generations of rats nest in the same place, bringing in twigs from an area within 150 ft (50 m) of the nest. These nests, which can be carbon-dated, reveal what local vegetation was like in Anasazi times. They show that the Anasazi cut down all the trees around their settlements for building lumber and fuel. Toward the end, they had to travel 75 miles (120 km) to gather wood.