Circadian rhythm sleep disorder is a persistent or recurring pattern of sleep disruption resulting either from an altered sleep-wake schedule or an inequality between a person’s natural sleep-wake cycle and the sleep-related demands placed on him or her. The term circadian rhythm refers to a person’s internal sleep and wake-related rhythms that occur throughout a 24-hour period. The sleep disruption leads to insomnia or excessive sleepiness during the day, resulting in impaired functioning.

The Fourth Edition Text Revision of the Diagnostic and Statistical Manual of Mental Disorders (DSM-IV-TR, a handbook used by mental health professionals to diagnose mental disorders) defines circadian rhythm sleep disorder as one of several primary sleep disorders. Within the category of primary sleep disorders, it is classified as one of the dyssomnias, characterized by irregularities in an individual’s quality, timing, and amount of sleep. In earlier versions of the DSM, the disorder is called sleep-wake schedule disorder.

Circadian rhythm sleep disorder involves an alteration of an individual’s circadian system or a mismatch between a person’s natural, or endogenous, circadian system and the external, or exogenous, demands placed on it. It can lead to insomnia at certain times of the day or excessive sleepiness throughout the day. The insomnia or excessive sleepiness 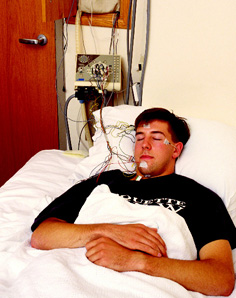 A patient in a sleeping lab participates in a circadian rhythm experiment. (Hank Morgan/Photo Researchers, Inc) results in impaired functioning in social, occupational, or other environments.

The delayed sleep phase type of circadian rhythm sleep disorder is marked by a delay of the sleep-wake cycle as it relates to the demands of society. It is often due to a psychosocial stressor (an event in a person’s environment that causes stress or discomfort), especially for adolescents. The delayed sleep-wake cycle leads to chronic sleep deprivation and habitually late sleeping hours. Individuals with this type often have difficulty changing their sleeping patterns to an earlier and more socially acceptable time. Their actual sleep, once it begins, is normal. It is the timing of their sleeping and waking that is persistently delayed.

The jet lag type of circadian rhythm sleep disorder is characterized by disruptions arising from a mismatch between a person’s circadian cycle and the cycle required by a different time zone. The more

The shift work type of circadian rhythm sleep disorder is distinguished by disruptions due to a conflict between a person’s endogenous circadian cycle and the cycle required by shift work. Individuals who work the night shift often experience this problem, especially those people who switch to a normal sleep schedule on days off. Also, people who work rotating shifts experience this problem because of the changing sleep-wake schedules they experience. The disruptions caused by shift work result in inconsistent circadian schedules and an inability to consistently adjust to the changes.

Individuals with the delayed sleep phase type of the disorder exhibit habitually late sleep hours and an inability to consistently change their sleeping schedule. They often show sleepiness during the desired wake period of their days. Their actual phase of sleep is normal. Once they fall asleep, they stay asleep for a normal period of time, albeit a period of time that starts and stops at an abnormally late time.

Individuals with the shift work type of the disorder feel sleepy or fall asleep during the desired wake period, which includes the time spent at work. People with rotating shift schedules, especially schedules that gradually change, exhibit sleep disturbance and wake period sleepiness. Insufficient sleep time, family and social expectations, and alcohol use worsen this problem.

Individuals with the unspecified type of circadian rhythm sleep disorder also exhibit daytime and evening sleepiness or insomnia, especially those people who have a non-24-hour sleep pattern. People with irregular sleep patterns have difficulty knowing when they will fall asleep and wake up.

The shift work and jet lag types of the disorder often result in more severe symptoms for late-middle-aged and elderly people. It is estimated that up to 60% of night shift workers have the shift work type of circadian rhythm sleep disorder.

In order to diagnose circadian rhythm sleep disorder, patients are often asked for records of their sleep and wake times in order to determine if a diagnosis is warranted. Interviews and direct observation in a sleep lab may also be utilized. A diagnosis requires a pattern of sleep disruption caused by a mismatch between a person’s circadian sleep-wake pattern and the pattern required by that person’s environment. The disruption can be persistent or recurrent and leads to impaired functioning, often in a social or occupational context.

To differentiate circadian rhythm sleep disorder from other diagnoses, the sleep disruption must not occur exclusively during the cause of another sleep disorder or other disorder. The disturbance in sleep must not be due to the direct physiological effects of a substance, whether used for medication or abuse, or to a general medical condition.

The delayed sleep phase type of the disorder requires a persistent pattern of delayed sleeping and awakening and an inability to change the pattern. The jet lag type requires sleepiness and wakefulness at inappropriate times relative to the local time zone; there must be repeated travel more than one time zone away. The shift work type requires excessive sleepiness during the desired wake period and an inability to sleep during the desired sleep period, both due to changing shift work or night shift work.

Diagnosis of any type of circadian rhythm sleep disorder must be distinguished from normal adjustments a person makes in reaction to a schedule change. The sleep disruptions must be persistent and recurring and lead to social or occupational problems. People who prefer unusually late or early sleep schedules or people adjusting to a new sleep schedule should not receive this diagnosis unless they meet the other criteria.

Treatment of the delayed sleep phase type depends on the severity of the case. Mild cases may be addressed by an individual simply adhering to strict sleep and wake times. Severe cases may require incremental changes in sleep time, where a person sleeps 15 to 30 minutes earlier each day until an appropriate pattern is reached. Other methods of altering delayed sleep patterns include prescribing a night of sleep deprivation or the use of chronotherapy, a method in which sleep is delayed for three hours each night until the sleep pattern is rotated around the clock.

Often, treatment is ignored for persons with the jet lag type because people eventually return to their regular time zone and normal sleep-wake cycle and no longer exhibit symptoms. For people who travel often, it is preferable to adjust to the new time zone by sleeping at times appropriate to that zone if they intend to be there for one week or longer. Diets that target jet lag are also effective for some people, and light therapy, which involves exposure to a lighted device to simulate daytime, may be helpful to some people to adjust to new time zones.

People with the shift work type of the disorder benefit most from a non-changing work schedule. If rotating or changing shifts are unavoidable, rotations that occur in a clockwise direction, where shifts get progressively later and later, are preferable to those in a counter-clockwise direction. Also, when attempting to sleep, it is a good idea to create a comfortable sleeping environment by eliminating daytime noise and light.

Individuals with delayed sleep phase type often have great difficulty changing their sleep patterns and when they are able to change their circadian cycle, they have difficulty maintaining the changes.

People with jet lag type or shift work type can reduce symptoms often by simply decreasing the amount of travel or returning to a normal work schedule. When these changes are not possible, these individuals have trouble making the constant adjustments required to sleep and wake. People with the shift work type often report a reversal of symptoms two weeks after returning to a normal work and sleep schedule.

Because circadian rhythm sleep disorder is usually related to environmental stressors, avoidance of these stressors (such as long-distance travel, shift work, and sleep-disrupting lifestyles) can prevent the disorder from beginning or continuing. People who are able to adhere strictly to a normal sleep-wake schedule can also offset circadian rhythm-related problems.