ANCESTRAL PUEBLO (ANASAZI). The Colorado Plateau in southern Utah and Colorado and northern Arizona and New Mexico was home to prehistoric peoples termed "Anasazi" by early archaeologists. Today, the descendants of the "Anasazi" prefer the term "Ancestral Pueblo." These prehistoric farmers are well known for impressive masonry apartment houses or "pueblos," such as the great houses of Chaco Canyon, and for cliff dwellings, such as those found at Mesa Verde. 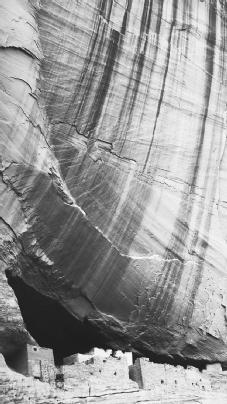 In most areas of the Colorado Plateau, the transition to aboveground dwellings occurred during the Pueblo I period. Ancestral Puebloans built early pueblos—arcs of connected jacal (mud and pole) surface rooms—and oriented them toward the south or southeast. Circular pit structures were built in front of the pueblos but were used as ceremonial meeting rooms, or "kivas." Cotton was grown in some areas. The Pueblo II and early Pueblo III periods were characterized by construction of masonry pueblos, agricultural intensification, escalating site density, and production of black-on-white and corrugated grayware ceramics. In Chaco Canyon and the surrounding area of northwest New Mexico, multistoried great houses were built in the midst of communities of smaller pueblo sites. These great houses were symmetrical structures built in a distinctive core-and-veneer masonry style and were often associated with masonry-lined great kivas. Pueblo Bonito, one of the largest, contained as many as eight hundred rooms and was four stories high. Irrigation agriculture was practiced in Chaco Canyon and some surrounding areas. Chaco Canyon was probably a center for periodic ritual gatherings attended by Ancestral Puebloans from a wide area. Prestige items found cached in Chaco Canyon include turquoise, shell beads, macaws, and wooden staffs. Cleared linear alignments extend from Chaco Canyon to the north and south. Rock art and building orientations indicate a concern with astronomical events.

During the Late Pueblo III period, Chaco Canyon was abandoned, and large, aggregated communities appeared in the Four Corners area. Some pueblos, such as Cliff Palace at Mesa Verde, were built in the shelter of sandstone overhangs. Cliff dwellings also were built across the Kayenta region of northwest Arizona and southeast Utah at this time. Evidence for violence at some Ancestral Puebloan sites in the Four Corners region suggests that cliff dwellings provided protection against real or imagined threats. Social instability was exacerbated by a great drought between A.D. 1275–1299.

By 1300, the Four Corners area was abandoned. Ancestral Puebloans moved to the Rio Grande Valley, the Zuni region, the Little Colorado River valley, and the Hopi Mesas, where they aggregated into large, plaza-oriented pueblos sometimes containing thousands of rooms. The katsina (or katchina) cult—an elaborate religious system including masked representations of deities—was adopted. Ceremonial cycles involved ritual performances in plazas and kivas. Glazeware and yellowware pottery were made. This Puebloan culture was encountered by the Spanish upon their arrival on the Colorado Plateau in 1540.