An oil spill is the accidental release of liquid petroleum into the environment. Because petroleum is often extracted in places that are far away from plants where it is refined and eventually used, it must be transported in large quantities by ocean tankers, inland-water barges, or overland pipelines. Accidental oil spills can occur at any time during the loading, transporting, and unloading of oil. Most spills occur in the ocean, but others happen on land. Some oil spills have been spectacular in magnitude and have caused untold environmental damage.

Petroleum, or crude oil, is a fossil fuel. Fossil fuels were formed over 300 million years ago, when much of Earth was covered by water containing billions of tiny plants and animals. After these organisms died, they accumulated on ocean floors, where, over the ages, sand and mud also drifted down to cover them. As these layers piled up over millions of years, their weight created pressure and heat that changed the decaying organic material into oil and natural gas.

Petroleum is a thick, flammable, yellow-to-black colored liquid containing a mixture of organic chemicals, most of which are hydrocarbons (organic compounds containing only hydrogen and carbon atoms). The most toxic or poisonous components of petroleum are the volatile components (those compounds that evaporate at low temperatures) and the components that are water-soluble (able to be dissolved in water).

Fossil fuel: Fuels, including coal, petroleum, and natural gas, formed by the decomposition of dead organisms over several million years.

Hydrocarbon: A molecule composed of hydrogen and carbon atoms.

Microorganism: An organism so small it can only be seen with the aid of a microscope.

Unrefined petroleum is a natural material, so it can be diluted or decomposed by bacteria and other natural agents. The products refined from petroleum—gasoline, kerosene, asphalt, fuel oil, and petroleum-based chemicals—are not natural. Because of this, few natural agents like bacteria exist to decompose or break them down. 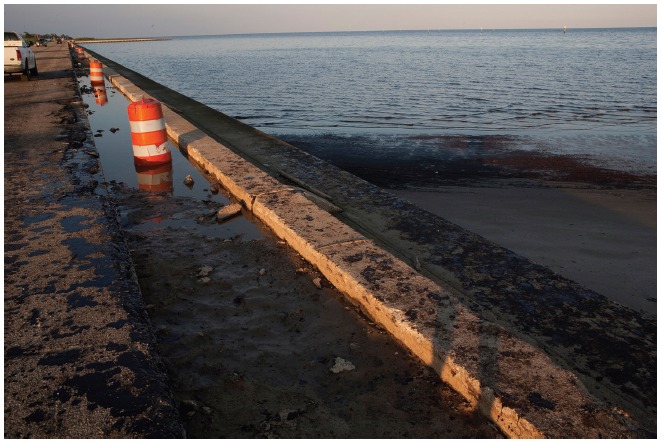 Oil from the Deepwater Horizon oil spill in the Gulf of Mexico in 2010 covers a stretch of Mississippi shoreline. © COCO ROBICHEAUX/ALAMY.

Crude oil is lighter than water, so it floats and quickly spreads over a large area. The environmental damage it causes depends partly on where the spill occurs. Spills in coastal areas tend to be much worse than those in the open ocean.

In the open ocean far from land, animals and plants below the surface of the water are largely unaffected by the oil spill. Bacteria naturally present in the water begin to break down the petroleum, using it as a nutrient. Eventually, the oil slick is broken down into a hard, tarlike substance, which is almost completely harmless to seagoing life of all kind. Wave action then breaks the pieces of tar into progressively smaller and smaller pieces. These small pieces, often invisible to the naked eye, remain floating in the water indefinitely.

Oil spilled on the open ocean severely affects seabirds. The oil coats their bodies, preventing them from fluffing their feathers to keep warm. A spill can quickly kill thousands of seabirds that get bogged down in the oil on the surface.

When an oil spill occurs near a coastline, the damaging effect is much greater. Waves wash the oil onto the shore where it covers everything—rocks, plants, animals, and sand. If the wave action is high, bacteria present in the water are able to break down the oil fairly rapidly. In areas where wave action is low, such as in a bay or an estuary, plants and animals quickly suffocate or are killed by toxic reactions to the oil, which remains for a considerable time. Because many small bays serve as nesting sites for aquatic birds and animals, spills in these areas are especially deadly.

One of the most environmentally damaging spills ever to occur in North American waters was the Exxon Valdez accident of 1989. The 11 million gallons (42 million liters) of spilled oil affected about 1,200 miles (1,900 kilometers) of shoreline of Prince William Sound and its surroundings in Alaska. The coastal habitats of many animals and birds were destroyed. Large numbers of sea mammals and birds were also affected in offshore waters. Of the estimated 5,000 to 10,000 sea otters that lived in Prince William Sound, at least 1,000 were killed by oiling. About 36,000 dead seabirds of various species were collected from beaches and other places. The actual number of killed birds, however, was probably in the range of 100,000 to 300,000. At least 153 bald eagles died from poisoning when they ate the remains of oiled seabirds.

A potential ecological disaster arose in January 2001 when a tanker carrying 234,000 gallons (886,000 liters) of diesel and bunker (a heavy mixed fuel used by tourist boats) spilled the bulk of its load after it ran aground near the Galápagos Islands, famed for their rare species of birds, reptiles, and marine life and an inspiration for English naturalist Charles Darwin’s (1809-1882) theory of evolution. Though most of this oil washed away in strong ocean currents and then evaporated, the possible destruction of this unique ecosystem alarmed both biologists and the government of Ecuador, which depends on these islands for tourism revenues.

The worst accidental marine oil spill in history as of 2014 was the April 20, 2010, explosion of the Deepwater Horizon oil rig in the Gulf of Mexico. Deepwater spilled about about 210 million gallons (795 million liters) of oil into the waters of the Gulf, gushing unchecked into the ocean for almost three months before the well was finally sealed on July 15, 2010. Oil covered about 68,000 square miles of the Gulf waters (180,000 square km). The immediate impacts on the marine life, wetlands, ecosystems, organisms, and economies of several coastal states were severe. Coastal wetlands were covered with oil, destroying habitat used by animals such as sea turtles, which lay their eggs on land. Populations of bluefin tuna, amberjack, dolphins, and corals all dropped in the years just after the spill. By 2013 much of the oil from the spill had sunk to the bottom of the Gulf, where it may continue to affect fish populations in future years. BP, the company that owned the rig, was found to be responsible for the accident due to failure to repair defects and an inadequate safety system. The U.S. government fined BP over $4.5 billion, and as of 2014 the government and industry were studying the accident to find ways of preventing similar oil spills in the future. The total environmental and economic damage was still being assessed in 2014.

Bioremediation is the use of bacteria and other living microorganisms to help clean up hazardous waste in soil and water. These microorganisms work by decomposing or breaking down toxic chemicals into simpler, less-poisonous compounds. Petroleum can be consumed by microorganisms, transforming it into compounds such as carbon dioxide and water.

Unfortunately, the technique of adding bacteria to a hazardous waste spill to increase the rate of decomposition has yielded limited success. If a community of bacteria present in an area where a spill occurs can consume that hazardous waste, the bacteria grow rapidly. Adding further microorganisms does not seem to increase the overall rate of decomposition. More important, areas where spills take place often do not have optimum conditions under which the bacteria can function. Oxygen and certain nutrients, such as nitrate and phosphate, that the bacteria need are often limited.

However, in the case of the Exxon Valdez oil spill in Alaska in 1989, nitrogen- and phosphorus-containing fertilizer was applied to about 75 miles (120 kilometers) of oiled beach. The fertilizer adhered to the petroleum residues. With these added nutrients, the naturally occurring community of bacteria broke down the oil at a 50 percent faster rate.

Large quantities of crude oil have also been spilled during warfare. The largest-ever spill of petroleum into a body of water occurred during the Persian Gulf War in 1991. Iraqi forces deliberately released an estimated 400–500 million gallons (1,900 million liters) of petroleum into the Persian Gulf from several tankers and an offshore tanker-loading facility. Iraqi forces also sabotaged and set fire to over 500 oil wells in Kuwait. Before the fires were extinguished and the wells capped, an estimated 10 to 30 billion gallons (40 to 120 billion liters) of crude oil had been spilled. Much of the oil burned, releasing toxic petroleum vapors into the atmosphere.