When it comes to energy, the term oil refers to fossil fuel in the form of crude oil, or petroleum, that is extracted from the earth. This is a thick, blackish liquid made from the remains of plants and animals that have been subjected to immense heat and pressure over millions of years. Chemical processes have turned this once living material into molecules of hydrogen and carbon known as hydrocarbons. Crude oil is what comes out of the ground; refined oil is what people use.

Crude oil is pumped out of the ground and transported by pipeline, rail, ocean tanker, or truck to a refinery. There it is heated and processed into different products based on different boiling points. For instance, gasoline and jet fuel have low boiling points, and wax and asphalt have very high boiling points. Other products made from crude oil include diesel fuel, kerosene, heating oil, and plastic.

Oil is a nonrenewable resource because it takes millions of years for it to form naturally. It is unsustainable because people are using it up much faster than it could ever be replenished through natural geologic processes. Also, extracting and refining oil harm the environment, and burning it for fuel releases carbon dioxide and other greenhouse gases into the air, contributing to climate change.

Oil has been a major part of the economy since the dawn of the automobile age in the early twentieth century and now has an essential role in our modern way of life. The price of oil on the world market is a key Page 463  |  Top of Articleindicator of economic health and has wide-ranging effects and consequences for other industries that require transportation of goods. According to Fortune magazine, five of the six largest companies in the world are oil companies. 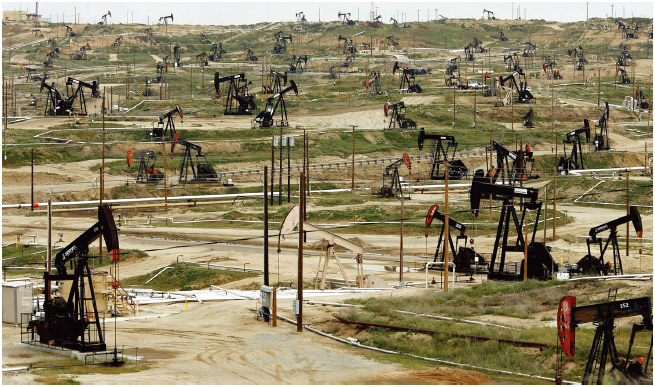 Oil production and consumption are measured in barrels. A barrel of crude oil contains 42 gallons (159 liters). Each barrel of crude oil yields about 19 gallons (72 liters) of gasoline after it is refined. This is enough to fill the gas tank of the average minivan one time.

In 1956 M. King Hubbert (1903–1989), an American geologist who worked for an oil company, mathematically predicted that oil production in the United States would peak between 1965 and 1971 and decline thereafter. He appeared to have been correct; U.S. production indeed peaked in 1970 and declined after that—until 2015, when it reached a new high of 9.3 million barrels owing to the rise of recovering oil from shale rock. Hubbert also predicted that world oil production would peak in 2000, but this did not come to pass.

Oil comes in two main varieties—light crude and heavy crude. Light crude oil pours easily, meaning it has lower viscosity than heavy crude oil, which is thick and semifluid. This makes light crude easier to refine, and for this reason it is preferred for converting into transportation fuel. The world's largest oil field in Saudi Arabia produces light crude oil, and so do many of the oil wells in Texas. About 30 percent of the proven oil reserves in the world contain light crude. A proven reserve is a repository (a place of storage) of oil from which it is possible to recover oil at reasonable cost using today's technology.

Heavy crude oil is very thick, or viscous, and is difficult to pump out of the ground and transport to a refinery. When heavy crude reaches the refinery, it takes more energy to transform into usable products than light crude, which makes heavy crude even less sustainable. It is also more expensive and less efficient than light crude oil. Additionally, the process of extracting and refining heavy crude oil generates up to three times as many carbon emissions as extracting and refining light crude oil. A significant portion of the world's remaining oil is heavy crude. Both Canada and Venezuela have substantial amounts of it.

Because oil is formed by geologic processes, it tends to be concentrated in areas with certain geologic characteristics. The world's largest proven oil reserves are in Canada, Venezuela, Saudi Arabia, Iraq, Iran, and Russia, but the total amount of oil left in the world is unknown. Some proven Page 465  |  Top of Articlereserves are very deep underground or embedded in rock and would be difficult and costly to extract. It is also possible that much more oil lies beneath the oceans in hard-to-reach areas.

Much of the heavy oil being discovered in the twenty-first century is embedded in shale rock. For example, the Green River shale rock formation beneath Colorado, Wyoming, and Utah contains more than four times the amount of oil than remains in Saudi Arabia. Extracting oil from shale rock requires strip mining, crushing, and heating the rock to obtain the oil-infused kerogen, or fossilized organic material, that can be distilled into oil. This is an extremely energy-intense process that requires much water, technology, and heavy equipment, making it very costly. It also pollutes the water and releases up to 50 percent more carbon into the atmosphere than the extraction of light crude oil. Additionally, strip-mining areas with shale rock destroys the very trees that absorb carbon dioxide from the atmosphere in the first place, and this type of mining can pollute the soil and groundwater with heavy metals.

Another large repository of heavy oil is in Canada's Alberta tar sands. Tar sands are composed of clay, sand, water, and bitumen, which is a semisolid form of sticky heavy oil and sulfur. The tar sands are located under a forest, so recovering it requires clearcutting the forest, draining wetlands, and diverting rivers and streams. The sandy soil then is scooped up and mixed with hot water to release the bitumen. The bitumen is heated up in large vats with natural gas, to convert it into heavy crude oil. Further processing is required to transform it into its final products. This energy-intense process has more serious negative effects on the environment and releases 14 percent more greenhouse gases into the air than the process of refining conventional light crude oil.

Oil and the environment

Because of the increasing amount of energy required to extract much of the world's remaining oil and because both extracting and using it harms the environment, oil is considered unsustainable as a transportation fuel source. Petroleum harms the environment during extraction and when it is burned as a fuel source. Drilling and mining operations often disrupt local ecosystems. When oil is spilled or seeps into local soil and waterways, it kills fish, birds, and other wildlife. Furthermore, refineries require large amounts of many hazardous chemicals, and the distillation Page 466  |  Top of Articleprocess releases many of these chemicals into the air, causing pollution and acid rain, which can destroy trees and harm human health. Contaminated wastewater and sludge can contaminate waterways if they are not handled properly. Fires and explosions can injure and kill workers and lead to health problems for those who live in the area.

Most notably, when refined oil products are burned, they release greenhouse gases, especially carbon dioxide, into the atmosphere. Gasoline and diesel emissions account for 43 percent of global carbon emissions. These emissions contribute to water and air pollution in the short term, and in the long term they trap heat in the earth's atmosphere and contribute to climate change. Climate change will alter the temperature of the atmosphere and have lasting negative consequences, such as the melting of glaciers and the polar ice caps, rising sea levels that displace millions of people, and widespread loss of habitat and biodiversity (variety of life-forms) that will interfere with many people's ways of life.

Oil spills generally happen when oil is being extracted from the ground or when it is being transported via oil tanker to a refinery. However, two of the largest oil spills in history were intentional: the Gulf War oil spill and the Kuwait oil fires, both in 1991. In the first case Iraqi soldiers purposely opened valves at an oil terminal and dumped oil into the Persian Gulf to prevent U.S. forces from docking ships. In the second instance, retreating Iraqi military forces set fire to oil wells as they fled. These deliberate oil spills and large oil fires that burned for several months caused drastic air pollution throughout Kuwait and neighboring countries for much of 1991. Long-term damage to the coast and marshlands of Saudi Arabia has been recorded in the years since these events.

The Deepwater Horizon spill in 2010 was the largest accidental oil spill in modern times, releasing about 210 million gallons (795 million liters) of crude oil into the Gulf of Mexico after the oil rig exploded and collapsed into the sea. The oil damaged the surrounding ecosystem by killing many varieties of marine life, which collapsed the populations of other species that depended on them. Delicate wetlands were polluted, and beaches became uninhabitable. The fishing and tourism industries in the Gulf region lost billions of dollars. Even years later, marine life continues to suffer from both the spilled oil and the chemicals used to clean it up. In 2015, BP, the company responsible for the oil rig, agreed to pay Page 467  |  Top of Article$18.7 billion to settle all federal and state claims arising from the spill, bringing total costs to nearly $54 billion, costs that will most likely be passed along to consumers. More spills like this are possible in the future, especially with the increase in deep-sea drilling.

The burning of oil and other fossil fuels is the primary cause of climate change and a significant source of damage to the environment. For this reason, the modern world's reliance on oil is unsustainable. If future generations are to have enough energy to sustain themselves at current standards, most oil will need to be replaced with renewable energy sources. This will require intense research and development of solar, wind, hydro (water), biomass, geothermal, and other forms of renewable energy. This transition from an oil economy to a renewable energy economy, however, will take place only when generating energy from renewable resources becomes less expensive and more efficient than recovering and refining fossil fuels.