Family and Home, Impact of the Great Depression on

FAMILY AND HOME, IMPACT OF THE GREAT DEPRESSION ON

The Great Depression challenged American families in major ways, placing great economic, social, and psychological strains and demands upon families and their members. Families of various class, ethnic, racial, and regional backgrounds, exhibiting various styles of marital and familial relationships, responded in different manners to the stresses and demands placed upon them. In 1933, the average family income had dropped to $1,500, 40 percent less than the 1929 average family income of $2,300. Millions of families lost their savings as numerous banks collapsed in the early 1930s. Unable to make mortgage or rent payments, many were deprived of their homes or were evicted from their apartments. Both working-class and middle-class families were drastically affected by the Depression.

From one perspective, the story emerging from the Great Depression can be described as one of family "disorganization" and deprivation. Marriage rates declined, although they started to rise in 1934, Page 311  |  Top of Article and the trend toward decreasing birthrates, already underway, accelerated during the 1930s. Although divorce rates also declined, this seems to have been largely the consequence of the inability to pay lawyers' fees; desertion rates increased during the decade. In some cases, two or more families crowded together in apartments or homes designed as single-family residences. Some 250,000 youths were on the road, travelling by freight train or hitchhiking in order to find work or more favorable circumstances. From 1929 to 1931, the number of children entering custodial institutions increased by 50 percent. In many economically deprived families, children suffered from malnutrition and inadequate clothing.

Things seemed to be especially difficult for unemployed and underemployed male heads of families. Traditional conceptions of gender roles prevailed during the 1930s; accordingly, men were expected to be the breadwinners of their families. Unemployed men felt like failures as a result of their inability to provide for their families. Such feelings of inadequacy were accentuated when, often after having used up their life savings, these men were forced to endure the humiliating experience of applying for relief. Unemployed men often found themselves hanging around their homes, irritating their wives; quarrels became more frequent between husbands and wives. At times, men withdrew emotionally and even physically from their families and friends. Children of impoverished families, recalling memories of family life during the 1930s, often remembered their fathers as emotionally distant and indifferent. Some unemployed men took up drinking. Others went off on long trips, looking for employment in other cities. Some deserted their wives and families altogether.

ADAPTING TO THE DEPRESSION

From a different perspective, another story of the family emerges—one that emphasizes the resilience and ability of the family to adapt in the face of adverse economic circumstances. Some families, of course, were not affected by major economic deprivation during the 1930s, but even among those that were, many were able to maintain relatively "normal" patterns of family life—with the father 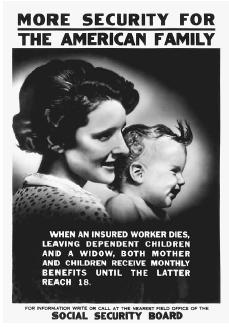 The Social Security Board promised to provide greater security to American families, as this Depression-era poster testified. FRANKLIN DELANO ROOSEVELT LIBRARY securely positioned as the head of the family and relatively harmonious relationships prevailing within the home. In the years after the Depression, many recalled the era, perhaps with an exaggerated sense of nostalgia, as a period of family togetherness and solidarity. Family members listened to the radio together (by the 1930s, millions of urban families owned at least one radio) or engaged in such activities as playing Monopoly, a popular game that appeared in the mid-1930s.

Features that could be considered symptoms of family disorganization, especially the employment of women and children outside the home, can perhaps best be regarded as ways in which families actively adapted to and coped with economic deprivation. In order to help provide economic support for their families, married women increasingly Page 312  |  Top of Article

A Texas family of migrant agricultural laborers lived in this trailer south of Chandler, Arizona, in 1940 during the cotton picking season. LIBRARY OF CONGRESS, PRINTS & PHOTOGRAPHS DIVISION, FSA/OWI COLLECTION came to work outside the home during the 1930s, generally in low-status, low-paying jobs, often in the service and light manufacturing sectors. In spite of widespread condemnation of the employment of married women and the refusal of many government agencies, schools, libraries, and so on to employ them, the percentage of married women in the workforce continued to rise during the Depression years. Married women also contributed to the livelihood of their families by intensifying their household labor—by, for example, maintaining vegetable gardens and preserving the resulting produce, or patching and remaking old clothes. Children contributed to their families as well. Boys worked, usually on a part-time basis, in activities such as delivering newspapers, doing janitorial tasks, and assisting as store clerks. Girls, on the other hand, tended to stay home and help with domestic tasks, especially when their mothers worked outside the home.

Another example of how family life was actively adapted to the social and economic circumstances that Americans encountered during the Depression era was the creation of a family-oriented union culture by the Congress of Industrial Organizations (CIO) in late 1930s. As historian Lizabeth Cohen has demonstrated, CIO unions came to emphasize family life, especially family-oriented social and recreational activities, as a means of enhancing solidarity

[Image not available for copyright reasons]

among the diverse ethnic and racial groups involved in the CIO. Recognizing that working-class women played a key role as decision-makers in their families, unions attempted to enlist them in such activities as campaigns to buy union-made products and social events aimed at breaking down racial and ethnic barriers between working-class families. Indeed, women were conceived of as playing a guiding role in the elaboration of a family union culture.

Efforts to adapt the family to economic adversity during the 1930s did not result in a challenge to conventional gender roles. Many married women worked for wages outside their homes during the Depression years, but their children, often coming of age during the post-World War II era, did not come to see the employment of married women as in itself a positive good. Accustomed at an early age to assuming conventional gender roles—as boys worked at part-time jobs outside their homes, while girls worked at domestic chores within the home—the children of the 1930s saw their mothers' employment as perhaps necessary under the circumstances, but not as an indication that married women should pursue careers rather than devote themselves to being housewives. Similarly, although the CIO encouraged women to join unions in industries such as meat-packing, demanded equal pay for women, and enlisted working-class wives as guides of family union culture, CIO unionists persisted in seeing men as the primary family breadwinners. Women were not encouraged to assume leadership roles in CIO unions, and little effort was made to organize workers in the clerical Page 314  |  Top of Article 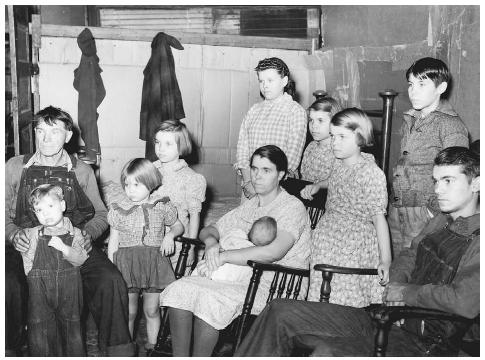 Like many families during the Depression, this unemployed miner from Zeigler, Illinois, depended on government relief to support his wife and nine children in 1939. LIBRARY OF CONGRESS, PRINTS & PHOTOGRAPHS DIVISION, FSA/OWI COLLECTION and service sectors, which tended to be dominated by women.

With the advent of the New Deal in March 1933, the federal government came to assume a new role in fostering the economic security and welfare of American families. As critics have suggested, however, New Deal programs tended to assume the primacy of the male breadwinner within the family, thus shoring up traditional gender roles. Work relief programs, such as the Works Progress Administration (WPA), discriminated against women, and women workers were generally not adequately covered by the retirement pension and unemployment insurance programs established by the Social Security Act of 1935. Although the New Deal welfare state owed much of its inspiration to the idea of the "maternal commonwealth" formulated by female reformers during the late nineteenth century and the Progressive era, and despite the major role that female administrators and social workers played in implementing the New Deal welfare state, there was little concern for advancing the specific interests and rights of women during the 1930s.

African-American families were especially hard hit by the Depression. Unemployment rates were significantly higher for blacks than for whites in Northern cities, and in the South, where most of the African-American population continued to live during the 1930s, economic conditions were especially bad. Black sharecroppers in the South were forced to subsist on a minimal level, and increasingly Page 315  |  Top of Article they were evicted from their farms as the result of Agricultural Adjustment Administration policies. In urban areas, there was an especially high percentage of female-headed families due to high mortality rates among black males and their inability to provide for their families as breadwinners. Moreover, the eligibility requirements of the Aid to Dependent Children program, established by the Social Security Act of 1935, apparently contributed to the problem by driving black fathers from households. Again, however, the issue of female dominance in many black families is more than simply a story of the "disorganization" of the black family. In fact, in both Northern cities and the rural South, black women tended to be the centers of networks of kin, friends, and neighbors—networks by means of which scarce resources were shared, thus enabling families to survive under conditions of extreme economic adversity. In general, New Deal measures benefitted blacks less (and sometimes not at all) in comparison to whites, though New Deal work relief and welfare programs did provide significant assistance for black families, especially in Northern cities.

THE LEGACY OF THE DEPRESSION

The Depression era bequeathed a mixed legacy to American families and households. Perhaps the major positive aspect of this legacy was the idea that the economic security and welfare of the family should be a fundamental national goal. To be sure, this idea was imperfectly realized in the New Deal welfare state, which often discriminated against women wage-earners and relegated the families of blacks and other nonwhites to second-class status. Nevertheless, during the 1930s and subsequent decades, the federal government did come to play a major role in providing for the health, welfare, education, and housing of American families.

Denning, Michael. The Cultural Front: The Laboring of American Culture in the Twentieth-Century. 1997.

Evans, Sara. Born for Liberty: A History of Women in America, 2nd edition. 1989.

Jones, Jacqueline. Labor of Love, Labor of Sorrow: Black Women, Work, and the Family from Slavery to the Present. 1985.