Gerrymandering refers to the deliberate manipulation of territory to gain disproportionate power in elections. The term ‘gerrymandering’ immortalizes the name of the Massachusetts governor, and the name of the cartoonist, Tisdale, who in 1821 likened the shape of one manipulated district to a salamander (Figure 1). The purpose of gerrymandering is to help ‘your side’ and to hurt the ‘other side’, whether this refers to political party, a racial or ethnic group, kinds of territory (urban, rural, suburban, rich, poor), or individuals (incumbents or challengers), and thereby to obtain a higher share of seats than of votes.

While the most publicized examples of gerry-mandering recently have bizarrely shaped congressional districts (see examples below), gerrymandering is practiced at all levels of government in which there are electoral districts with single members – legislatures, county and city councils, and many others. And clever map drawers can gerrymander – that is successfully discriminate – without resorting to extreme irregularity.

There are various means of gerrymandering electoral districts (see Figure 2):

Dilution is effective where the other party has enough support in one area to elect one representative, but splitting can prevent any representation. Packing is the ideal tool where the other party has enough votes – in a region or metropolis – to elect two or more representatives. Carving a district out of the densest central concentration will pack minority party voters so that they receive 85–90% of the vote, thereby ‘wasting’ 35–40%.

Placing two incumbents of the other party in revised districts was a key component of the infamous DeLay Texas redistricting. Multimember districts in which one party has a majority was historically an effective way of preventing minority representation, for example, Blacks, from representation in local and state government, mainly in the south, but it also works for partisan discrimination, as in the Indiana legislature (Indianapolis).

Most gerrymanders are executed by the very legislative bodies they control, the state legislatures, city or county councils, an obvious but accepted conflict of interest, but even bipartisan commissions or state or federal courts are not immune from the temptation and practice. At the very least, courts routinely approve gerrymanders, no matter how extreme.

While gerrymandering often does take the form of extremely irregular districts, subtler gerrymandering can appear reasonably compact, while using any one of these four tools. Changes to the congressional districts of Mississippi illustrate the transition from traditional communities to a historic discriminatory gerrymander against black voters, by splitting the north to south trending community via east–west districts (Figure 5). Similarly, Republican districters have sometimes been able to reduce democratic representation to a single ‘packed’ core seat, while splitting the remaining democratic vote area into several surrounding 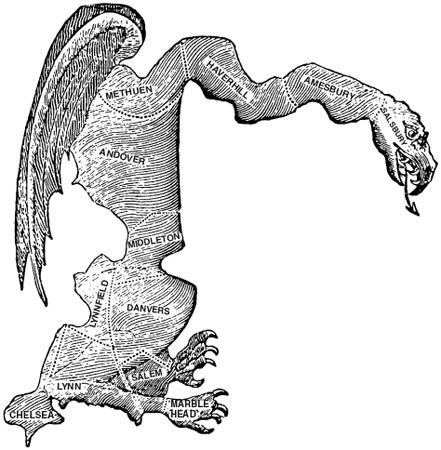 Gerrymandering and the Courts

Gerrymandering was rarely challenged before the late 1960s, in part because it was simply accepted as ‘politics as usual’, and also because it was not as outrageous or as necessary. Malapportionment, or unequal population among districts was by far the more obviously unfair form of electoral discrimination, and even this was not struck down by the US Supreme Court until 1962 (Baker vs. Carr).

US Courts have both condemned and endorsed gerrymandering, but only with respect to discrimination against a racial or linguistic minority. How can this be? Gerrymandering was considered ‘just politics’ until critical decisions on the basis of the Voting Rights Act (1965, and subsequent amendments), which outlawed racial dilution, disallowed retrogression, and required ‘preclearance’ of plans by the Department of Justice in states with a history of racial discrimination. The most definitive decision was Thornton versus Gingles (1986), which established the standard that race can be one but not the only factor in drawing a district, but that it is reasonable to design ‘majority minority’ districts where practicable. The basic problem with race-conscious districting was the risk of packing in the large urban ghettoes and of extreme irregularity in assembling sufficient minority numbers in rural and small-city parts of the south. The one criterion of racial representation was elevated at the expense of others, such as compactness or nonracial communities of interest.

The Department of Justice, many legislatures, and courts began the1990 round of redistricting with the expectation of striving for proportionality, even if heroic gerrymandering was required. This led to creation of well-publicized irregularities in many redistricting plans, with disparate parts connected by strips of interstate highway, as in the North Carolina 12th District (Figure 4). The gerrymandered districts did elect a record number of minority members in the 1992 elections, but at the expense of any geographic semblance of community. Voters in several states filed actions against plans. In the majority of such cases the Supreme Court did reject the plans as unconstitutional racial gerrymanders, and required less draconian plans (Turner vs. State of Arkansas). Yet several other infamously irregular plans were found to be acceptable. 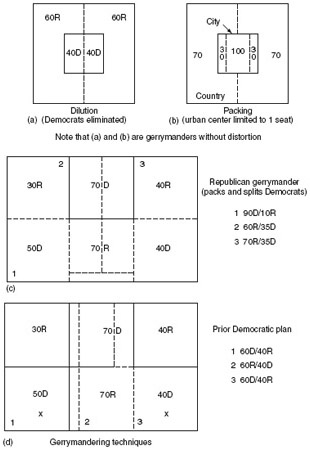 Figure 2 How to gerrymander. (a, b) Gerrymanders without distortion; (c) Republican gerrymander; and (d) prior democratic plan.

This leaves unresolved two aspects of gerrymandering and electoral fairness: those of party and of territory (e.g., urban, suburban, and rural-small town), but there is no judicial consensus to invalidate manipulation against a political party or recognized place or community. Compactness and community of interest are viewed as ‘desirable’ but not as essential. Courts have ruled against recognition of any kind of community except race or language, and have accepted blatant and intentional political gerrymanders. Although the courts reference inexcusable irregularity in striking down a racial gerry-mander, they totally fail to be concerned with convoluted districts that are political (Badham vs. Eu, Bandemer vs. Davis).

After both 1990 and 2000, Republicans, when in control, ingeniously pursued creating racial majority– minority districts, as this frequently eliminated liberal white democrats. The most extreme case after 2000 was in Texas, where the Republicans replaced a court-drawn plan, leading to a massive shift of seats to the Republicans. The plan was upheld at all levels, revealing that the US is not ready to tackle the unfairness of partisan gerrymandering, no matter how seriously it disenfranchises voters, in a winner-take-all electoral system. 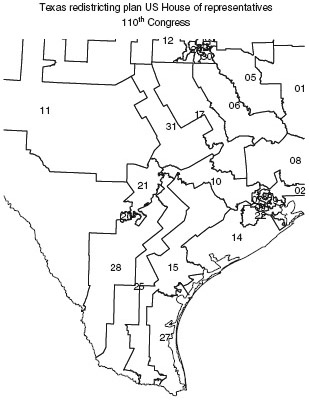 What is fairness and why does it matter? Fair representation means that citizens' votes are meaningful, that over time and over a small set of districts, the shares of seats won is proportional to the share of votes received – that some peoples’ votes are not weightier than others. The problems with gerrymandered districts which violate this sense of fair representation include distrust of government, apathy, not voting and withdrawal from the political process, lack of competition, and lack of change (shift of voter preferences does not translate to a shift in representation, a consequence of the almost automatic reelection of incumbents). Lack of competition results in many districts with no opponents even willing to run. The further risk is nonresponsiveness and corruption of government.

Party workers, in presumably smoke-filled rooms, have always used a combination of maps and knowledge of returns by voter precincts to accomplish their gerry-mandering. The geographic information system (GIS) revolution in geography, in two respects, has also created a revolution in redistricting and therefore in gerrymandering technology. First was the development of computer cartography, in turn dependent on the creation of digital line (boundary) files and second was the extension of the census down to the block level. The availability of data at the block level, together with efficient and interactive GIS packages ironically made it far easier to carry out ever more egregious gerrymanders, for example, by using stretches of highway to connect disparate parts of a district. Yet, excellent programming models exist which could draw fair and compact districts. The best models not only achieve political fairness between the parties, but also compactness and respect for communities of interest and the integrity of political boundaries; these are almost never used. 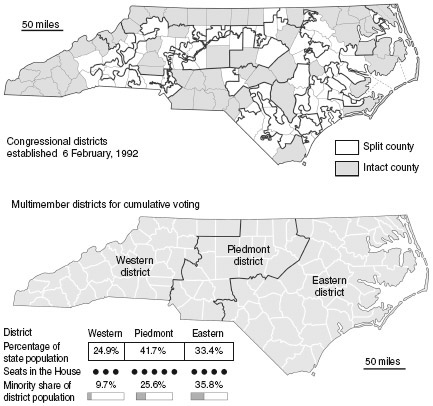 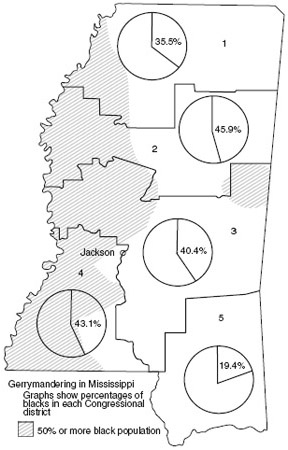 Does it matter who does the districting? Plans drawn by truly independent commissions, as in Iowa, or the courts will be the least gerrymandered. Bipartisan commissions or divided legislatures tend to gerrymander for maximum protection of incumbents, although the plans may be reasonably balanced for the major parties. Legislatures controlled by one party, with a governor of the same party, usually results in the most extreme gerrymanders, one that creates open seats for them, while placing the other party's incumbents against each other, packing the other party's voters, and creating many marginal districts for themselves, although this can be risky if there is a very large shift in voter allegiance.

Bipartisan redistricting commissions (usually still appointed by the parties, which still have to approve the plan) and the adoption of formal criteria for districting are the two reforms easiest to achieve. Several states have such commissions, which do at least give lip service to good government criteria such as compactness, community of interest, and avoidance of breaking up political jurisdictions. Only very few, such as Iowa and Hawaii, have technical commissions completely independent of parties. Increased political fairness and competitiveness would be truly possible only where the location of incumbents is ignored – this is probably impossible.

Multimember districts with some form of proportional representation is difficult to introduce in the United States, with its long history of single-member districts, but they are widespread, even the norm in much of the world. Guinier proposed multimember (3) districts as a solution to the racial and fair representation dilemma raised by the North Carolina redistricting case (Shaw vs. Reno) – wise and clever, but utterly rejected. A variety of techniques is available, such as concentration of votes on one of the three candidates, or the ‘single transferable vote’, in which an individual's vote is allocated to the first preference, and then after candidates are elected or eliminated, then unneeded or unused votes transferred in accordance with voter's preferences.

Finally, the US Supreme Court could decide that political gerrymandering is an unconstitutional infringement of fair representation and could reject a plan that disproportionately discriminates against one party. This is the most likely eventual solution, but one that is not imminent.

The voters don't choose their politicians

The politicians choose their voters!