Modern world's fairs were events of the nineteenth and twentieth centuries. Whereas medieval fairs were concerned with the selling of goods, modern world's fairs were involved in the selling of industrial technology and industrial society; they fostered the idea that industrial development was to be equated with social progress. World's fairs not only furnished a place where the latest technological achievements could be presented to an international public, but they also provided an orientation to people confronting the vast and rapid changes of industrialism. They offered a story of past progress, a photograph of the present, and a vision of the future. But by the middle of the twentieth century, world's fairs had lost much of their importance and charm.

The first world's fair was held in London in 1851. Prince Albert, husband of Queen Victoria and president of the Royal Society of the Arts, wanted to go beyond the national industrial exhibitions that France had made famous and that Britain was ready to duplicate. After much discussion a building of glass, with iron and wood beams, was constructed in Hyde Park. This so-called Crystal Palace held all of the exhibits. Because it was built with prefabricated, interchangeable parts, the building could be constructed and taken down quickly, with little damage to the park. In fact, the building was actually constructed over ten large elm trees. During the 141 days it was open, more than six million people attended. The success of the Crystal Palace exhibition inspired other nations to hold international fairs.

Early world's fairs were often remembered by the products they introduced to the public. Americans were prominent in the Crystal Palace exhibition. Cyrus McCormick's reaper, Samuel Morse's telegraph, and Charles Goodyear's vulcanized rubber products were well received. Colt revolvers and Robbins & Lawrence rifles made with interchangeable parts were recognized as having revolutionized the making of firearms. At the New York World's Fair in 1853, Elisha Otis demonstrated his safety elevator. At the Philadelphia Exposition of 1876, Alexander Graham Bell introduced the telephone, and Thomas Edison gave his first public demonstration of the phonograph in Paris in 1889. Sound-synchronized movies, X-rays, and wireless telegraphy marked the 1900 Paris fair. The St. Louis World's Fair of 1904 introduced the safety razor, the ice cream cone, iced tea, and rayon. President Franklin D. Roosevelt's televised opening of the 1939 New York World's Fair inaugurated regular television broadcasting in the United States. Computer demonstrations by IBM (International Business Machines) educated visitors to the New York World's Fair of 1964–1965.

More important than the inventions were the industrial systems the fairs exhibited to the public. The Philadelphia Centennial Exposition of 1876 celebrated the age of steam. In Machinery Hall the giant Corliss steam engine, 40 feet high and with 2,520 horsepower, ran all of the machinery in the hall. There were also steam fire engines, steam locomotives, and steam pumps. By 1893 the Chicago World's Columbian Exposition was celebrating the age of electricity. At night the fair was lighted by thousands of incandescent lightbulbs. In the electrical building there were Edison and Westinghouse dynamos and electric motors that powered other machines. Transportation, however, was the theme in St. Louis in 1904. Trains, streetcars, and more than 160 motorcars were displayed. A major feature of the fair was the dirigible contest, in which a large cash prize awaited anyone who could pilot his airship over a prescribed route. 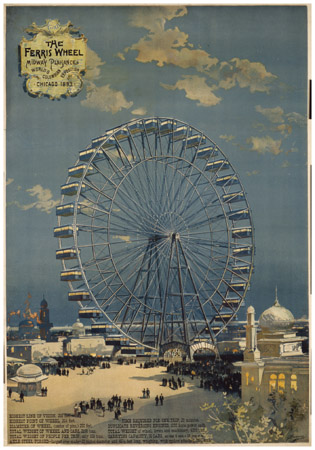 Ferris Wheel at Chicago Expo, 1893. The world's first Ferris wheel was a featured attraction at the World's Columbian Exposition in Chicago in 1893. CHICAGO HISTORY MUSEUM/GETTY IMAGES.

New York's World's Fair in 1939 celebrated the 150th anniversary of George Washington's inauguration. The purpose of the theme, “Building the World of Tomorrow,” was to show how a well-planned democratic society would survive the world's turmoil. The outbreak of World War II, however, resulted in the new theme of “Peace and Freedom” for the 1940 opening.

The outside world had a way of impinging upon world's fairs. At the New York World's Fair of 1853, Susan B. Anthony led a demonstration for women's rights. At the Philadelphia Centennial Exposition in 1876, a building housed a display of inventions by women, along with photographs showing women working in a variety of occupations. Of particular note was Emma Allison, who operated a steam engine that ran six looms and a printing press. When a man asked her if the work was too demanding for someone of her sex, she replied, “It's easier than teaching, and the pay is better.” At the Chicago World's Columbian Exposition of 1893, the women's building displayed a great collection of works by women. These included a library of 5,000 Page 441  |  Top of Articlebooks, paintings, and sculptures, as well as mechanical devices invented by women. A careful selection of statistics from around the world showed the extent to which women were a part of the world economy. Anthony believed the women's building did more to raise the consciousness of women than had all the demonstrations of the nineteenth century.

At the Philadelphia Centennial Exposition of 1876, vendors and amusements were located outside the fairgrounds. The 1893 Chicago planners recognized, however, that a profit could be realized by bringing the amusements and vendors into the fair itself. One of the most popular of the Midway exhibits in Chicago was called the “streets of Cairo,” featuring a belly dancer named Little Egypt. She also appeared at the 1904 St. Louis fair but was outdrawn there by Jim Key, the counting horse. The 1933 Chicago fair had a Midget Town and featured the fan dancer Sally Rand. The New York World's Fair of 1939 featured the synchronized swimming of the so-called Aqua girls in Billy Rose's Aquacade. The Eiffel Tower was a huge success at the 1889 Paris fair. For a generation that had not flown in an airplane, seeing the world from 985 feet was unlike anything they had ever experienced. The 1893 Chicago fair offered G. W. G. Ferris's great wheel: 40 cars, each carrying 36 passengers, moving to a height of 270 feet. Forty years later Chicago offered the 200-foot-high Sky Ride, across the second-longest suspension span in the United States. The parachute jump at the 1939 New York World's Fair attracted both thrill seekers and onlookers. Many world's fairs came to be remembered for their outstanding amusements.

Because world's fairs were international events, organizations often held their meetings at the fairs. For example, 127 international organizations met at the 1900 Paris fair. The second and third modern Olympic Games were held as part of the world's fairs in Paris (1900) and St. Louis (1904). Fairs also featured villages of peoples from around the world. Dressed in their native costumes, these villages were publicized as serving an educational function. The subtle message, however, was the ethnocentric view that celebrated Western progress by comparing the achievements shown at the fair with the backwardness of the native cultures. Following the Olympics, the St. Louis fair held three days of so-called anthropology games, in which native peoples were enticed to demonstrate their skills. Sioux participated in archery contests, Africans threw javelins, and seven-foot Patagonians tried the shot put. Their inability to match Western records not only confirmed the value of training but also suggested, to visitors at least, the superiority of Western civilization.

VISIONS OF THE FUTURE

Those people who went to world's fairs had their faith in Western industrial progress confirmed. In 1933, at the height of the Great Depression, for example, Chicago's Century of Progress assured visitors that science guaranteed a better future. The science building had a giant statue gently guiding a trembling man and woman into the future. The official guidebook to the fair stated, “Science Finds, Industry Applies, Man Conforms.” By 1939, as fascism and Nazism were coming to dominate Europe, visitors to the New York's World Fair were given a powerful message of hope. The symbols of the fair, the Trylon and Perisphere, suggested that soaring human aspirations could be realized on the earth. Inside the sphere was a giant model city known as Democracity. This utopian city had Centerton as its business and cultural center, Millvilles of light industry, and Pleasantvilles that were exclusively residential. Democracity, with its defined zones and rational streets, carried the message that well-planned, livable cities were possible through democratic forms of government. Futurama, the General Motors exhibit, the most popular at the fair, presented a vision of the United States united by a 14-lane national highway in which radio-controlled automobiles moved at 100 miles per hour. With its green suburbs, industrial parks, productive farms, and high-rise urban centers, this vision of what the United States would be in 1960 offered an inspirational alternative to the chaos that the world was experiencing.

Over time, the expense of holding a world's fair requires corporate sponsorship, and the commercialization of the 1964–1965 New York World's Fair suggested that such affairs had become oriented toward selling products. The fair's Ferris wheel, for example, was a giant tire with the name of the company appearing in huge letters on the sides of the tires. Furthermore, people's attitude toward technology has changed. Many no longer accept the idea that simply because something can be done technologically it ought to be done. The 1964–1965 exhibit of General Motors, for example, demonstrated how humans might explore and colonize the oceans, the deserts, and the polar ice caps, but few people were inspired by the vision.

World's fairs have lost much of their importance as technical fairs and television have become a more effective means of presenting new technological developments to specialists and to the general public alike. Television and the Internet bring foreign cultures into people's homes, and air travel allows people to visit other cultures. Many international organizations are now connected with permanent agencies of the United Nations. Theme parks such as Disney World and Epcot Center provide the kinds of amusements and thrills that were once found at world's fairs.

While the world's fair large-scale exhibition model has fallen out of popularity and feasibility, such expositions continue to be held throughout the world. Because of the lack of interest and high cost, such demonstrations have met with varying degrees of success. Expo 2000, held in 2000 in Hannover, Germany, was a financial failure. However, Shanghai's Expo 2010, which cost more than $11 billion, saw record numbers of attendees. The exposition increased tourism and boosted revenue significantly for the city. In the twenty-first century, the purpose world's fairs once served may be obsolete, but the events can still be a source of income and pride for nations making their debut on the international stage.