Video games are increasingly becoming part of the media landscape in the Muslim world. They constitute a popular leisure time activity, especially among youth. Until the twenty-first century, games of U.S., European, and Japanese origin have almost exclusively dominated the market. As a result of loose copyright enforcement, the young generation in most Muslim countries has easy access to global video-game production. Religious and political authorities in the Muslim world have repeatedly criticized foreign games for including explicit displays of sexuality or violence, corrupting morals, and misrepresenting Islam. Several U.S. games have been banned in such nations as Iran, Saudi Arabia, and the United Arab Emirates.

In fact, a substantial portion of U.S. and European action games based on real or fictitious Middle Eastern conflicts—especially the ones with first-person shooters—tend to portray Muslims as enemies (e.g., War in the Gulf, Delta Force, Conflict: Desert Storm, Full Spectrum Warrior, Conflict: Global Terror). Such games typically allow the player to control U.S. or coalition forces only, whereas the enemy is depicted using visual signifiers representing Arabs or Muslims, such as a head cover, loose clothes, or dark skin color. Usually, the enemy is collectivized and linguistically functionalized as “various terrorist groups,”“militants,” or “insurgents.” Most of these games exhibit strong cultural bias when schematizing Arabs and Muslims as enemies in the narrative framework of fundamentalism and international terrorism. 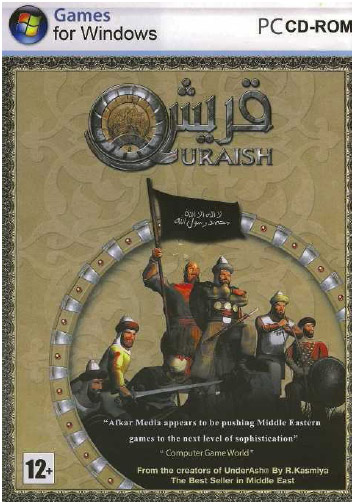 Other groups of foreign games, especially adventure and role-playing games, exploit Orientalist imagery, topics, and narratives (e.g., Prince of Persia, The Magic of Scheherazade, Arabian Nights). These games typically feature characters such as Bedouin, caliphs, djinns, and belly dancers; navigate players through bazaars, harems, and the desert; and contain such plots as saving a kidnapped woman or assassinating an evil vizier. The “Orient” is construed as an exotic and ahistorical entity. This mode of representation fits Edward W. Said's concept of Orientalism, translating it into a new digital domain. As a result, many video-game producers in the Muslim world perceive games not as neutral containers but as a medium communicating significant cultural, political, and religious messages to youth. In the initial phase of video-game development in the Muslim world, there has been an urge to present Muslim youth with alternative games that reflect their culture, history, and religion in a more appropriate way.

Beyond action games based on real conflicts with Israel in Palestine and Lebanon (e.g., Jenin: Road of Heroes, Special Force, Under Ash, Under Siege, Resistance), which provide Muslim youth with heroes of their own and retell the story of the conflicts from the Muslim and Arab perspective, a large number of educational games have appeared on the market, aimed at teaching the basic tenets of Islam or the history of Islamic civilization, or at promoting “positive and family values” (e.g., Young Muslim, Prophets' Tales, Adventures ofAhmad). In the twenty-first century, a number of video-game developers in the Muslim world started to design games based on local histories, mythologies, and popular culture (e.g., Quest of Persia, Garshasp: The Monster Slayer, Age of Heroes, Abu Hadid). Such games typically do not deal with religion or politics and are aimed at both the local and global markets.

Probably the most intricately developed game with an Islamic emphasis is Quraish, released by the Syrian company Afkar Media in 2005. This strategy game deals with the pre-Islamic Bedouin wars and the origin and spread of Islam. Through the unfolding game narrative, players are taught about early Islamic history. During the particular missions, the player takes part in many real historical events and visits places such as Mecca or Medina, with the depicted topographies based on available historical descriptions. The game is narrated in classical Arabic and communicates Islamic moral and ethical values to the player.

Video-game producers and designers in the Muslim world face many challenges, including lax or nonexistent copyright protection, regulation of cultural production, and media control. At the same time, they have to take into account different cultural communication patterns, cultural identities, and religious values. As a result, most of the producers in the Muslim world share a relatively coherent set of concerns that shape their design outcomes and production strategies. These concerns primarily include emphasis on authenticity; self-representation; respect for one's traditions, religion, and culture; and personal motivation and engagement.

Nevertheless, the games produced in the Muslim world almost invariably appropriate genres, rule systems, and game mechanics of global video-game production, particularly those of successful American games. As such, what emerges from local video-game production is a story of “hybridization” and cross-cultural exchange rather than “authenticity.” Video games are becoming new spaces where cultural encountering takes place and where cultural “authenticity” as well as “hybridity” is simultaneously construed and contested.

Tawil Souri, Helga. “The Political Battlefield of Pro-Arab Video Games on Palestinian Screens.”Comparative Studies of South Asia, Africa, and the Middle East 27, no. 3 (2007): 536–551.