America's fortieth president from 1981-1989, known variously as "Dutch," the "Teflon President," "The Great Communicator," and the father of an economic system named after him ("Reaganomics"), Ronald Wilson Reagan is one of the most controversial political figures of the twentieth century. In fact, an entire system of thought, appropriately titled "Reaganism," was coined to describe the effects of, depending on who you ask, his destructive social legacy or his repositioning of American optimism and strength at the forefront of world politics. In either case, one cannot underestimate the importance of Reagan's influence during the social and political upheavals of the 1980s and beyond.

On February 6, 1911, Ronald Wilson Reagan was born to Nelle and John Reagan in Tampico, Illinois. Although Reagan recalls his younger years as idyllic, his family moved often, living on the fly in five different places in Dixon, four in Tampico, and two in Galesburg, Illinois. His family was involved in the religious revivals hitting Tampico at the time but, though his mother was a leader of church life 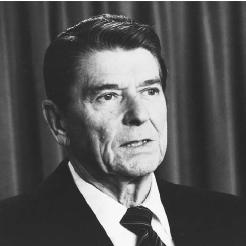 Ronald Reagan in her area, his father displayed a destructive reliance upon alcohol. Ronald's acting skills and religious views were formed together in these early years: he acted in his mother's skits, dated his pastor's daughter for eight years, led the Easter sunrise service, and cleaned and worked at the church.

Ronald attended high school in Dixon and enrolled at Eureka College as a freshman in 1928. He was a fairly good student, studying just enough on the easiest courses to get by, but he displayed a skill for last minute memorization that was, in the words of his brother Neil (who also attended Eureka), "photographic." He performed solidly at the guard position for the football team and was a stellar lifeguard at Lowell Park from 1927 to 1932, rescuing up to 77 swimmers. He performed in seven plays, lettered in two sports and was a cheerleader in others, became president of both the booster club and the senate, and spent time on the school paper and the yearbook, all while majoring in economics.

Upon graduation, he became a radio sports announcer at WHO in Des Moines, Iowa. He was particularly associated with baseball and, curiously enough, was not in attendance at most of the games he called. Though he became wildly popular in Des Moines for his broadcasting, he worked from a telegraph relay, providing his listeners with improvised action and drama. Success as an announcer eventually landed him at Warner Brothers studio in Hollywood. A screen test in 1937 won Reagan a contract and during the next two decades he appeared in 53 films, becoming famous for his cool vocal command and grace under pressure. He became most popular for his role of Notre Dame football coach Knute Rockne in the film Knute Rockne, All American (1940) and as the reckless Drake McHugh in King's Row (1942), a star vehicle that put Reagan firmly on the Hollywood map. He eventually married actress Jane Wyman, fathering two children, Maureen and Michael. Later divorced, and Reagan married his second wife, Nancy Davis, another Hollywood starlet, in 1952, fathering two more children, Patricia and Ronald.

By this time, Reagan's political career was already underway. As president of the Screen Actors Guild, Reagan became embroiled in disputes over the issue of communism in the film industry and his political views shifted from liberal to conservative. He toured the country as a television host, becoming a spokesman for conservatism and a company man for General Electric. Financially secure by 1962, Reagan then spent a few years delivering speeches to groups across the country, mostly about business and conservative interests and decrying big government. His oratory was dazzling and in 1966 he was elected governor of California by a margin of a million votes. His terms as governor were marked by conflict and controversy. Though he ran as a candidate opposed to taxes (a consideration that carried itself into his presidency), he implemented the highest tax increase in California at the time. He demanded the resignation of University of California, Berkeley, chancellor Clark Kerr during the free speech demonstrations, positioning himself as the voice of moderation exasperated with "campus radicals," yet was lauded by the state for balancing the books. The early stirrings of Reaganism thus became evident during Reagan's stint as governor: a devotion to business interests (General Electric), hard-line stances against liberals seeking to expand social freedoms, the demonization of Communism and the USSR, concern over America's perceived moral disintegration, a delegation of power to the point where the executive's ultimate responsibility lay in his rhetorical influence over party constituents, and finally, the entrenchment of governmental power and influence coupled with the oratorical promise of deregulation.

Reagan won the Republican presidential nomination in 1980 and chose as his running mate former Texas congressman and United Nations ambassador George Bush. The "New Right" program of the minimalist state and the free-market economy adopted by Reagan Republicans hit Washington by force. Primary among these policies was supply-side economics, once called "voodoo economics" by George Bush (before he became Reagan's vice president), a curious theory that relied upon the "trickle-down" of revenue from the wealthy to the poor. This effect would occur when the rich were encouraged to spend money, and to facilitate this, Reagan set about implementing tax breaks and benefits to the wealthy that continued on long past his presidency. He coupled this with cutbacks in domestic spending, especially on the welfare programs AFDC (Aid for Families with Dependent Children) and Medicaid. Welfare recipients were castigated by the Republican Party as loafers who had been coddled by the oversized government that Reagan campaigned against throughout his career. But Reagan's most important political victories came in the arena of foreign policy. He came into power on the heels of a crisis involving Iranian seizure of the U.S. embassy and the taking of hostages, whom former president Jimmy Carter (a Democrat), had been unable to free. Reagan resolved the crisis and freed the hostages shortly after his election to office. He railed against the Soviet Union and Communism as he had done throughout his Hollywood and California years, and set about increasing the budget of the Pentagon and the U.S. defense industries.

At home, he implemented equally aggressive domestic policies against crime, drugs, and pornography; although he championed a United States free from the dictates of oppressive government control, he nevertheless used government to further his conservative social agenda, which included the banning of abortion, reinstatement of school prayer, and promotion of the nuclear, heterosexual family. In hindsight Reagan's programs can be critiqued correctly: American prosperity and position had increased, at least in theory; one can arguably credit the United States' attractive capitalist prosperity for the eventual fall of communism in the Soviet Union that occurred during the Reagan-Bush years. This economic deregulation, however, led to at least one major economic recession, a growth in the unemployment rate, and a stigmatization of those whom Reagan's first domestic policy adviser, Martin Anderson, called the "Dependent American," citizens who relied upon social programs like AFDC and Medicaid for assistance. His punishing stances on social disintegration came back to haunt him during the infamous Iran-Contra Hearings, in which Reagan's cabinet was caught red-handed funneling drug money to the Contras in Central America, a geographical and political zone important to the presidency for its massive drug production. These were the kinds of inconsistencies that coursed throughout the Reagan Revolution, inconsistencies that can be traced all the way back to Reagan's imaginative renderings of baseball games at which he was never present. Some had a hard time sorting out where rhetoric and truth, in the form of policy, met. Yet Reagan, through his incredible oratorical skill and deep-seated beliefs in morality and independence, imparted a sense of relentless optimism and nationalism to a country whose national character and trust in its government had been marred by failures at home (in the form of civil rights dilemmas, the sexual revolution, divisive stances on race and class) and abroad (the Vietnam War, Iran).

A critique of Reaganism would not be complete without a consideration of the major effect Reagan had on the growth and use of media power in the United States. Popular culture can point to Reagan, much more than John F. Kennedy, as the premier political media presence of the twentieth century. It is obvious that Reagan's history in broadcasting, Hollywood, and advertising played a part in his success as the Great Communicator. Yet Reagan's influence could be felt everywhere in popular culture. In music, down-home heroes like Bruce Springsteen and John Mellencamp climbed the charts on the strengths of their blue-collar, heartland lyrics (Springsteen's biggest album of the period was Born in the U.S.A.), yet the birth of rap and its vocal dissatisfaction with unfair treatment of minorities and the poor in the lyrics of groups such as Public Enemy, KRS-One, and Grandmaster Flash & the Furious Five also occurred under Reagan's terms. Films moved toward hard-bodied, masculine heroes such as Sylvester Stallone (whose mythic Rambo was the de facto Reagan icon; in one political speech, Reagan actually compared himself to the character), Chuck Norris, the wildly popular Arnold Schwarzenegger, and, of course, Clint Eastwood (whose character's challenge, "Go ahead, make my day," Reagan appropriated as a motto during a foreign policy speech).

Television became fascinated with the Reagan 1980s, especially the world of glitz and glamour: Dynasty was one of the 1980's biggest television hits, while thirtysomething provided the Yuppies (Young Urban Professionals, who became the de facto Reaganite model constituents) with a forum for voicing their middle-class concerns. Further, the ultimate conflation of the entertainment industry and political sphere by the end of the Reagan era prefigured the rise in power of so-called tabloid talk shows, news programs (and even 24-hour news channels, such as CNN and CSPAN), "Reality TV" shows such as Cops, and an increasing influx of media attention on the personal lives of political figures (Nancy Reagan's alleged affair with Frank Sinatra, the Clarence Thomas-Anita Hill hearings, Gary Hart's indiscretions, the Bill Clinton-Monica Lewinsky affair, among others). Politics and entertainment had finally reached the stage in their evolution where they become linked together; Reagan's persuasive use of the media in his policy implementation strategies, as well as his economic deregulation which allowed media monopolies to grow from film to publishing to sports and further, gave the media heretofor unrealized power. This would be part of the legacy of Reaganism: his presidency while setting the foundations of an economic upswing that would last through the 1990s, had opened the door for all forms of the media, from television to film to publishing to the Internet, to become major players in the American sociopolitical landscape. With the presidency of Bill Clinton, the use of media to manipulate public opinion would perhaps reach its apex in "spin."