Kerouac is best known as a key figure of the artistic and cultural phenomenon of the 1950s known as the Beat Movement. Kerouac's best known novel, On the Road (1957), depicts the counter-culture lifestyle of the Beats, which was marked by manic travel and experimentation with sex and drugs. While On the Road stunned the public and the literary establishment when it was first published, its continuing popularity and the proximity of Kerouac's philosophy to that of such honored American 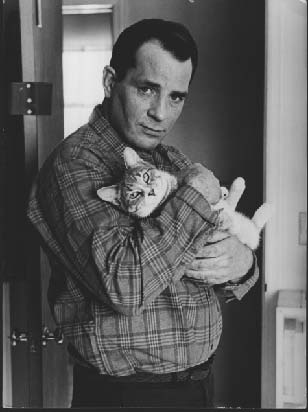 writers as Walt Whitman and Henry David Thoreau have garnered Kerouac a place in the canon of American authors.

Works in Biographical and Historical Context

A Troubled Life Born in a French-Canadian community in Lowell, Massachusetts, Kerouac was raised a Catholic and educated in parochial schools. He was a highly imaginative child who created an imaginary world of racing stables and sports teams, and who then wrote his own newspapers to report their performances. An outstanding athlete, Kerouac received a football scholarship to Columbia University but withdrew from school during the fall of his sophomore year. He was beginning to feel deeply troubled by the great shift in morals brought about by World War II. Kerouac joined the Navy in 1943 and was released after six months for psychological reasons. He worked the remainder of World War II as a merchant seaman and associated with the bohemian crowd around the Columbia campus that included Allen Ginsberg and William Burroughs. The publication of On the Road brought Kerouac sudden notoriety, and eight of his books were produced during the next few years, as publishers rushed to capitalize on his popularity. Kerouac's natural

Neal Cassady (1926–1968): An American poet of the Beat Generation who exerted a large influence on Jack Kerouac. The character of Dean in On the Road is based on Cassady.

John F. Kennedy (1917–1963): The thirty-fifth president of the United States, who served from 1961 until his assassination in 1963. His brief period of leadership has been idealized by many Americans and is sometimes referred to as “Camelot.”

Martin Luther King, Jr. (1929–1968): A highly influential leader of the Civil Rights Movement during the 1960s who worked to end racial inequality in the United States.

shyness, however, kept him from enjoying his fame. Hhe was known to arrive at interviews intoxicated and failed in his sporadic attempts to withdraw from society to concentrate on writing. A sincere patriot and Catholic, Kerouac became increasingly bewildered by and alienated from his bohemian fans in the 1960s. He returned to the place of his birth in 1966 and moved with his mother to St. Petersburg, Florida, in 1968. He died from complications due to alcoholism in St. Petersburg in 1969 and was buried in Lowell.

The Beat Movement The Beat Movement, which took its name from Kerouac's abbreviation of “beatific,” began in Greenwich Village and San Francisco as a reaction against the conservatism in America during the Cold War era. Many of Kerouac's friends in the Beat Movement served as the basis for the characters in his novels. Novelist William Burroughs and poet Allen Ginsberg are portrayed in On the Road as Old Bull Lee and Carlo Marx. Beat poet Gary Snyder was the inspiration for Japhy Ryder, the main character in one of Kerouac's better-known novels, The Dharma Bums (1958). Undoubtedly the single most influential personality in Kerouac's circle of friends, and the main character in both On the Road and Visions of Cody (published posthumously in 1972), was Neal Cassady. Kerouac saw the energetic, charismatic Cassady as the quintessential Beat figure and the last of a vanishing breed of American romantic heroes. Kerouac also cited Cassady's stream-of-consciousness writing style, exemplified in his voluminous letters, as having inspired his own “spontaneous prose” technique.

Autobiographical Narration Kerouac considered his novels a series of interconnected autobiographical narratives in the manner of Marcel Proust's Remembrance of Things Past (1922–1931). The novels that make up “The Legend of Duluoz,” as Kerouac called the totality of his works, include Visions of Gerard (1963), which pictures Kerouac's childhood as overshadowed by the death of his beloved brother Gerard at age nine; Doctor Sax: Faust Part Three (1959), a surrealistic depiction of Kerouac's boyhood memories and dreams; Maggie Cassidy (1959), which recounts Kerouac's first love; and Vanity of Duluoz: An Adventurous Education 1935–46 (1968), which chronicles Kerouac's years of playing football at prep school and Columbia. In On the Road, Kerouac wrote about the late 1940s, focusing on the years of traveling and socializing with Neal Cassady, Allen Ginsberg, and William Burroughs. Visions of Cody (1972), viewed by many critics as a late revision of On the Road, retells the story in spontaneous prose. Kerouac wrote about his love affair in 1953 with an African American woman in The Subterraneans (1958), and his adventures on the West Coast learning about Buddhism from the poet Gary Snyder are chronicled in The Dharma Bums (1959). Desolation Angels (1965) covers the years just prior to publication of On the Road, while Big Sur (1962) displays the bitterness and despair Kerouac experienced in the early 1960s and his descent into alcoholism. Together these novels portray the birth, education, and eventual disillusionment of an American idealist.

On the Road is considered, along with Allen Ginsberg's poem “Howl” (1956) and William S. Burroughs's novel Naked Lunch (1959), to be one of the seminal texts of the Beat Generation. Kerouac's work was influenced artists including Thomas Wolfe, Fyodor Dostoyevsky, Marcel Proust, Jack London, and James Joyce, among others.

Searching for BeliefOn the Road is considered the quintessential statement of the 1950s literary movement known as the Beat Generation. On the Road describes the growing friendship of two men, Sal Paradise and Dean Moriarty, and their crisscrossing journeys over the American continent. On a deeper level, it was the story of the narrator's search for religious truth and for values more profound than those embraced by most of mid-twentieth-century America. In both form and subject On the Road was completely unlike the serious fiction that dominated the era. Accordingly, it was ridiculed by Kerouac's contemporaries in the literary establishment, who viewed it as “an insane parody of the mobility of automotive America,” according to Dennis McNally in Desolate Angel: Jack Kerouac, the Beat Generation, and America. On the Road spoke to many readers, however; it expressed their own Page 877  |  Top of Articleunarticulated dissatisfaction with the repressive climate of the United States after World War II.

There have been critical attempts to compare On the Road thematically with such American classics as The Great Gatsby (1925). Because of his flamboyant and tragic life and career, Kerouac has been the subject of several recent critical biographies. Past speculation on whether Kerouac would merit a permanent place in contemporary American fiction has ended. He is now widely recognized, if begrudgingly by some, as an important contributor to American literature. His writing has influenced many artists, including Thomas Pynchon, Tom Robbins, Ken Kesey, Hunter S. Thompson, Jim Morrison, John Lennon, Bob Dylan, Tom Waits, Jerry Garcia, and Ben Gibbard.

On the Road A barely fictionalized portrait of the late 1940s when Kerouac and his friends traveled back and forth across the United States, On the Road was not universally perceived as literature upon publication. His narrative convinced some critics that On the Road signaled the moral demise of Kerouac's generation. The New Yorker labeled Dean Moriarty a “wild and incomprehensible ex-convict.” Gilbert Millstein, representing the opposing view, decreed in the New York Times that the publication of On the Road was a “historic occasion” and the immoderate lifestyle of the Beats was a “search for belief.” Critics who shared this attitude focused on the spiritual quest theme of On the Road which, along with its picaresque narrative, made this novel a descendant of American road literature, represented by such works as Mark Twain's Adventures of Huckleberry Finn (1884). Although On the Road was said to inspire the peripatetic Hippie generation of the 1960s, later critics paid greater attention to Sal's disillusionment with the road at the conclusion of the novel. Some now view On the Road as depicting the conflict within Sal between the contemplative life of a writer and spiritually oriented person and the gregarious, adventurous life on the road.

Much of the sensationalism and subjectivity that marked early Kerouac criticism has been replaced by traditional, scholarly critical effort. Some recent critical studies show considerable interest in Kerouac's “spontaneous prose” method and view it as an extension of the “stream of consciousness” technique utilized by James Joyce.

The friendship between Sal and the people he meets during his travels are an integral part of On the Road. Other works that explore the theme of friendship include the following:

The Epic of Gilgamesh (c. 2150 B.C.E.), an epic poem. This work explores the friendship between a mythological king, Gilgamesh, and his friend, Enkidu.

Nicomachean Ethics, Books 8 and 9 (c. 350 B.C.E.), two nonfiction works by Aristotle. Part of a set of ten, these two books discuss three types of friendships: those of utility, those of pleasure, and those of “good.”

Friendship: An Exposé (2007), a nonfiction book by Joseph Epstein. This work explores the complexities and changing nature of friendship.

has often been called? How does the structure and narrative style of On the Road impact your reading of the text?