About the Publication: The editors of the Chicago Daily Tribune were not alone in assuming that President Harry S. Truman (served 1945–1953) could not win the 1948 U.S. presidential election. Most polls and political analysts predicted a victory by his Republican opponent, Thomas E. Dewey. Truman did win the race, however, thanks to aggressive personal campaigning across the country and his strategy of attacking the Republican Congress instead of the Republican presidential candidate. Papers with partisan Republican leanings, such as the Chicago Daily Tribune, pictured below, were anxious to report the defeat of the Democrat Truman. The Chicago Daily Tribune 's error is best remembered because of the famous photograph of President Truman posing with its mistaken headline that Dewey, not Truman, won the election of 1948.

Vice President Harry S. Truman, a former senator from Missouri, became president of the United States on April 12, 1945, after Franklin D. Roosevelt (served 1933–1945) died in office. He agreed with Roosevelt's New Deal policy, which was based on the idea that the government needed to take an active role in providing economic justice and equality to U.S. citizens. As president Truman extended this policy through what he called the Fair Deal. Unlike Roosevelt, however, Truman appeared to the public as disorganized and restless, suggesting new policies in each speech and failing to prioritize his most important initiatives. In other words, he seemed more of a confused bureaucrat than a visionary leader. In response the Congress, controlled by Republicans, opposed Truman's Democratic proposals and tried to limit, not increase, the size of government. This political opposition ensured that the Fair Deal would not have the success of Roosevelt's New Deal.

It seemed certain to most U.S. political and media insiders that Truman did not stand a chance of election when he decided to run for the presidency in 1948. The southern section of the Democratic Party split from the main party and formed the States' Rights, or "Dixiecrat," Party and nominated South Carolina governor Strom Thurmond to run for the presidency. The left wing of the Democratic Party supported Roosevelt's third vice president, Henry Wallace, as a candidate. This disharmony within the Democratic Party, combined with Truman's lackluster record, led most insiders to favor Republican nominee Thomas E. Dewey to win the race. Truman organized an aggressive campaign, however, traveling the nation by train and speaking directly to the people. Rather than attacking the opposition's candidate, he attacked what he called the "do-nothing Congress" in a series of fiery and eloquent speeches. His hard work paid off in the form of a surprise victory.

The election of 1948 was important for three reasons. First, it proved how much impact an effective campaign strategy could have. Truman turned the tide of public opinion toward him thanks to passionate speeches and personal appearances. His train trip across the nation was the difference between victory and defeat. Second, the campaign helped to set the precedent of presidents blaming Congress for the failure of policies and the obstruction of plans. Competing against Congress rather than the opposing presidential candidate became a pattern seen many times when presidents sought reelection in the twentieth century.

Third, the election had lasting importance because it gave Truman four more years as president. Although he ran on a Fair Deal platform, the program continued to disappoint both Truman and the American people. By the end of his term in 1952, Truman knew he could not win reelection. Popular opinion turned to the Republican Party with the election of Dwight Eisenhower (served 1953–1961). President Eisenhower's approach was quite different from Truman's. He wanted to cut spending, reduce taxes, limit the power of the presidency, and give more authority to the legislature and judiciary. The welfare-state era of the New Deal and Fair Deal ended with Truman's administration. Although Truman's election Page 243  |  Top of Article 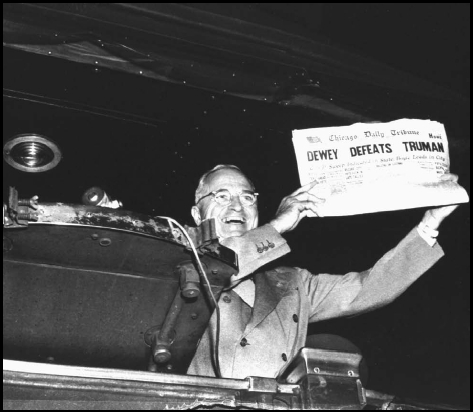 Primary Source: "Dewey Defeats Truman" SYNOPSIS: The editors of the Chicago Daily Tribune believed, like many others in the media, that Republican presidential candidate Thomas E. Dewey would win the election of 1948. They printed an edition of the newspaper that claimed "Dewey Defeats Truman" before the votes were even counted. In this photograph, President Harry S. Truman, having won the election, happily poses for a picture with the mistaken headline. UPI/CORBIS-BETTMANN. REPRODUCED BY PERMISSION. seemed like a victory at the time, it did not guarantee success for the economic and political policies he supported.