Acids and bases have been known by their properties since the early days of experimental chemistry. The word "acid" comes from the Latin acidus, meaning "sour" or "tart," since water solutions of acids have a sour or tart taste. Lemons, grapefruit, and limes taste sour because they contain citric acid and ascorbic acid (vitamin C). Another common acid is vinegar, which is the sour liquid produced when apple cider, grape juice, or other plant juices ferment beyond the formation of alcohol. Vinegar is a 5 percent waterPage 5  |  Top of Article solution of acetic acid. Besides having a sour taste, acids react with active metals to give hydrogen, they change the colors of indicators (for example, litmus turns from blue to red), and they neutralize bases. Bases change the colors of indicators (litmus turns from red to blue) and they neutralize acids. Hence, bases are considered the chemical opposite of acids.

Most common acid-base reactions take place in water solutions (commonly referred to as aqueous solutions). One of the earliest definitions of acids, advanced by the Swedish physicist and chemist Svante Arrhenius in 1887, stated that acid ionizes in aqueous solution to produce hydrogen ions (which are protons), H+, and anions; and a base ionizes in aqueous solution to produce hydroxide ions (OH−) and cations. Later studies of aqueous solutions provided evidence of a small, positively charged hydrogen ion combining with a water molecule to form a hydrated proton, H+(H2O) or H3O+, which is called the hydronium ion. Often, the hydronium ion or hydrated proton is represented as H+ (aq). Hydrogen chloride (HCl), a gas, is an acid because it dissolves in water to yield hydrogen ions and chloride ions. This water solution of HCl is referred to as hydrochloric acid.

A typical base, according to the Arrhenius definition, is sodium hydroxide (NaOH). It dissolves in water to give sodium ions and hydroxide ions.

In the reaction of an acid with a base in aqueous solution, the hydrogen ions of the acid react with the hydroxide ions of the base to give water. The second product is a salt, which is composed of the positive metal ion from the base and the negative ion from the acid. For example,

Since HCl (aq) and KOH (aq) are fully ionized in solution, the preceding equation can be written as

Ions common to both sides can be canceled to yield

Strengths of Acids and Bases

The strength of an acid or base is determined by the extent of its ionization in aqueous solution. Strong acids, such as hydrochloric acid, are 100 percent ionized in aqueous solution, whereas weak acids, such as acetic acid, are less than 5 percent ionized. Experimentally, the extent of ionization is determined by measuring the electrical conductance of solutions. Strong acids and bases are strong electrolytes, and weak acids and bases are weak

electrolytes. Table 1 lists some common acids and bases and indicates whether they are strong or weak.

For weak acids and bases, partial ionization is a dynamic equilibrium between unionized molecules and its ion, as indicated by the double arrow in equation (7). For example, acetic acid is only partially ionized in aqueous solution

Ammonia (NH3) is a weak base, and although it does not have OH− ions in its formula, it produces the ion on reaction with water.

A major problem with Arrhenius's acid-base theory is that some substances, like ammonia, produce basic solutions and react with acids, but do not contain hydroxide ions. In 1923 Johannes Brønsted, a Danish chemist, and Thomas Lowry, an English chemist, independently proposed a new way to define acids and bases. An acid donates hydrogen ions (also called a proton donor); a base accepts hydrogen ions (also called a proton acceptor). These definitions not only explain all the acids and bases covered by Arrhenius's theory, they also explain the basicity of ammonia and ions such as carbonate, CO32−, and phosphate, PO43.

The Brønsted-Lowry theory includes water as a reactant and considers its acidity or basicity in the reaction. In the partial ionization of acetic acid, water is a base because it accepts the hydrogen ion to form hydronium ion.

A meticulous experimenter, Thomas Lowry is best known for his conceptualization of acid–base chemistry. Studies of nitrogenous compounds led Lowry to question fundamental aspects of the role of hydrogen during acid–base reactions. Three months before Brønsted published his theory, Lowry released his own similar thoughts on proton acceptors and donors in print. 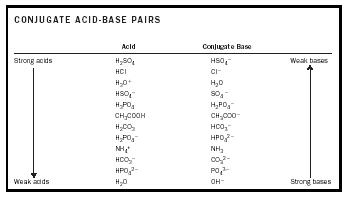 the conjugate base of acetic acid, CH3COOH. A pair of molecules or ions related to one another by the gain or loss of a single hydrogen ion is called a conjugate acid-base pair. In the reaction of ammonia, water is an acid because it donates a hydrogen ion to ammonia.

This ability of water to donate or accept hydrogen ions, depending on whether it reacts with a base or an acid, is referred to as "amphiprotic." The conjugate acid-base pairs in this reaction are NH3/NH4+ and H2O/OH−.

The Brønsted-Lowry definitions also explain why carbonate salts such as sodium carbonate (washing soda) dissolve in water to give basic solutions. Carbonate ion removes a hydrogen ion from a water molecule, which leaves behind a hydroxide ion:

Several common acids have more than one ionizable hydrogen ion (Table1). Each successive hydrogen ion in these polyprotic acids ionizes less readily. For example, sulfuric acid is a strong acid because of the complete ionization of the first hydrogen ion.

However, H2PO4− is a weaker acid than acetic acid because the second ionization is much smaller (by a factor of 105) than the first step.

The third ionization is also much smaller than the second step (by a factor of 105).

The anions of phosphoric acid can also accept hydrogen ions and act as bases with a strong acid like hydrochloric acid. For example,

Ions such as H2PO4−, HPO42−, HCO3−, and HSO4− can act as an acid by donating a hydrogen ion or as a base by accepting a hydrogen ion. This ability to act as either an acid or a base is referred to as an amphoteric property.

The Brønsted-Lowry acid-base definitions are based on the amphiprotic properties of water: Water is capable of acting as both a hydrogen ion donor and a hydrogen ion acceptor, depending on the acidic or basic properties of the dissolved substance (equations 9 and 10). Water can also act as a proton donor and proton acceptor towards itself. This is referred to as the autoionization of water.

The value of 1.0 × 10−14 is important to the study of aqueous solutions of acids and bases because it is a constant that is always the product of the molar concentration of H3O+ and OH−. 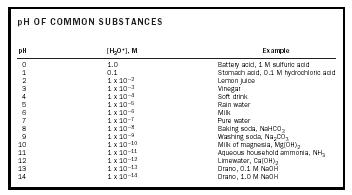 In 1909 the Danish biochemist S. P. L. Sørensen proposed that these exponents be used as a measure of acidity. He devised a scale that would be useful in testing the acidity of Danish beer. Sorensen's scale came to be known as the pH scale, from the French pouvoir hydrogene, which means hydrogen power. pH is defined as the negative logarithm (log) of the hydronium ion concentration.

Many natural substances are acid-base indicators. The most familiar one is litmus, an organic dye extracted from certain lichens. Litmus turns from blue to red in acidic solutions (< pH 7) and from red to blue in basic solutions (∼ pH 7). Some other natural indicators include red cabbage extract, blueberry juice, black tea, beet juice, rhubarb, and tomato leaves, and flowers such as the rose, daylily, blue iris, and purple dahlia. Red cabbage extract undergoes sharp changes of color at several pH values. The deep purple color of red cabbage leaves is caused by a mixture of water-soluble

Acid-base indicators are weak acids and bases. A typical indicator will ionize in aqueous solution according to the equation

As illustrated in equations (22) and (23), the addition of either a strong base or a strong acid produces one of the components of the buffer mixture and so the pH does not change. Buffers are limited in their buffer capacity, that is, the amount of a strong acid or strong base that can be added before the pH changes by 1 pH unit.

Buffers are very important to many industrial and natural processes. For example, controlling the pH of blood is essential to human health. The pH of blood is normally 7.40 ± 0.05, and good health depends on the ability of buffers to maintain the pH of blood within this narrow range. If the pH falls below 7.35, a condition known as acidosis occurs; increasing pH above 7.45 leads to alkalosis. Both these conditions can be life threatening. Two buffer systems, H2CO3/HCO3− and H2PO4−/HPO42−, control the pH of the blood.

Note that liquid ammonia still falls within the Brønsted-Lowry definitions since NH4+ is a proton donor and NH2− is a proton acceptor.

The Brønsted-Lowry theory, which defines acids as proton donors and bases as proton acceptors, covers all acid-base reactions in aqueous solution. The strength of acids and bases is related to the percent of their ionization in water. Strong acids and bases are 100 percent ionized, whereas weak acids and bases are less than 5 percent ionized. There are a number of salts that have acidic or basic properties in solution. For example, baking soda, NaHCO3, can be used as an antacid because the bicarbonate ion, HCO3−, is a strong enough conjugate base to combine with H3O+ to give carbonic acid.

The pH scale is a convenient way to represent the acidity or basicity of dilute acid and base solutions. Pure water has a pH of 7; acidic solutions have pH values < 7 and basic solutions have pH values > 7. Each change of one unit of pH is a tenfold change in acidity. Acid-base indicators, such as litmus and phenolphthalein, can be used to measure whether a solution is acidic or basic. A natural "universal indicator," red cabbage extract, can be used to determine the pH within 2 pH units. A buffer contains equal amounts of either a weak acid and its conjugate base or a weak base and its conjugate acid.