The Globe Theatre Is Constructed

The Globe Theatre Is Constructed

The Portuguese complete Fort Jesus at Mombasa in present-day Kenya in an effort to control trade routes to India in 1599.

The Tokugawa shogunate is established in Japan in 1600, marking the start of the Edo period.

By 1599 there are approximately nine hundred thousand slaves from Africa working on sugar plantations in the New World.

Robert Devereux, second earl of Essex (1567–1601) leaves his command of the English army in defiance of his orders from England's queen Elizabeth (1533–1603) to subdue the Irish rebel Hugh O'Neill, earl of Tyrone (1550–1616) in 1599. Finding himself out of favor with the queen, he attempts an armed uprising against her in 1601 that fails, and he is executed.

Isfahan, a city located in present-day Iran, becomes the imperial Safavid capital in 1598. Under the Safavid Dynasty, the city becomes one of the largest in the world and the capital of Persia.

New Mexico's royal governor Juan de Oñate punishes the Pueblo of the Acoma tribe for their rebellion by cutting off the right feet of twenty-four captive warriors in 1599.

Drama and theater existed throughout the Middle Ages in England and elsewhere. Folk plays, mystery plays, and morality plays all served to entertain and educate the people. Folk plays could take a variety of forms but often involved dance. Mystery plays reenacted biblical stories ranging from the creation of Adam and Eve to the life of Mary Magdalene. The earliest of these took place in the churches, but eventually they became secular productions, taking place in town squares and other venues. Guilds, or trade and merchant groups within the town, put on the plays as a part of their civic responsibility. At some festivals as many as fifty plays might be staged. The plays were open to and enjoyed by people of all social classes. Morality plays taught Christian virtues. In the typical morality play, the hero is tempted by vice but eventually saved from his life of sin.

At the end of the fifteenth century, a new type of drama emerged. These productions, called interludes, were often staged in noble households. Whereas earlier theatrical performances had a clear religious or moral message, the interludes were secular, eventually including political or historical themes. The plots and stories of medieval drama had little Page 196  |  Top of Article impact on later theatrical history, but they did pass down a few key elements to be used in later English plays. Plays continued to rely on only the most minimal staging, integrated aspects of comedy into the most tragic stories, and featured male actors in the roles of women, trends that continued throughout the sixteenth century.

A revitalized interest in classical learning brought new forms and themes to the English theater, including history, comedy, and tragedy. The first history play, King Johan by John Bale (1465–1563), was written in the 1530s. By the 1550s, translations of Latin plays and poetry had become widely available in English universities. English comedies appeared in the 1550s and tragedies in the 1560s. Classical influences led to the creation of a five-act structure for English theater. Iambic pentameter, a ten-beat poetic line that alternates unstressed and stressed syllables, was first developed by Geoffrey Chaucer (c. 1343–1400) but showed the influence of classical, French, and Italian authors. Iambic pentameter was nearly universally adopted by the English theater during the Elizabethan Age.

Theater production reached its highest point in England during the rule of Elizabeth I (1533–1603). Crowned in 1558, Elizabeth funded the theater during her reign. Elizabeth was a remarkably well-educated woman, fluent in both Greek and Latin. She translated classical works and, like many of her time, wrote poetry. Although Elizabethan England did see some religious persecution, Elizabeth's reign was a largely peaceful one. The stability and length of her reign helped to create an environment where the arts could flourish. Of all the arts, Elizabeth favored literary works the most. Poets and playwrights were welcomed at court with some regularity. The queen attended performances of the plays of William Shakespeare (1564–1616), and Edmund Spenser (1552–1599) dedicated his epic poem, The Faerie Queen (1590), to her.

Elizabethan England was home to many great playwrights and poets, but the best remembered of these is Shakespeare. He was born in 1564 to a middle-class family in Stratford-upon-Avon, approximately one hundred miles (161 kilometers) from London. He married in 1582, fathering a daughter in 1583 and twins in 1585. Little is known of his whereabouts or activities until 1592. By that year, he had likely completed a number of plays, including The Comedy of Errors, The Taming of the Shrew, and Henry VI. Shakespeare wrote and published poetry and private entertainments during these years.

In 1595, Shakespeare was a part of the Lord Chamberlain's Men, a theatrical company organized under the patronage of Henry Carey (c. 1524–1596), Lord Hunsdon and chamberlain to Elizabeth. Shakespeare would become part owner of this company, ensuring his later financial success and stability. From 1595 to 1597, the Lord Chamberlain's Men performed at a theater owned by James Burbage (1531–1597). After a dispute with the landowner, the timbers from the theater were moved across the Thames River and used to build the Globe Theatre in 1599. 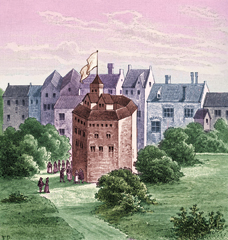 The Globe Theatre in London, where William Shakespeare's plays were originally staged, was destroyed by fire caused by a misfired cannon during a production of Henry VII in 1613. © LEBRECHT MUSIC AND ARTS PHOTO LIBRARY/ALAMY

The Globe Theatre was a large octagonal open-air amphitheater capable of accommodating approximately three thousand patrons. The timber building had a partial thatched roof covering the stage. The stage measured approximately 43 feet (13 meters) wide by 28 feet (8.5 meters) deep. The theater included a pit for standing guests, stadium-style seating, and three floors of covered gallery seating. The standing pit area in the Elizabethan theater allowed even a person of average means to attend. The commoners, called groundlings, paid a single penny to attend productions and crowded around and sat on the stage. Balconies above the stage could be used during productions or as a space for musicians. A backstage area and space beneath the staging platform provided storage and Page 197  |  Top of Articleallowed characters to move in and out of scenes. Similar nearby theaters included the Swan, the Hope, and the Rose. In 1613 a canon shot fired during a production of Shakespeare's Henry VII caused a fire, destroying the Globe Theatre completely. The Globe was rebuilt before Shakespeare's death in 1616.

The Globe Theatre is famous for its connection to Shakespeare, but it is important to note that Shakespeare was only one part of a great literary and theatrical revival in the sixteenth and early seventeenth centuries. Many other great authors produced poetry, prose, and plays during this period. In sixteenth-century France, Renaissance humanist François Rabelais (c. 1483–1553) produced a great romantic saga, Gargantua and Pantagruel. In England during the reign of Henry VIII (1407–1509), Sir Thomas More (1478–1535) produced a number of plays, including histories and the fantastic tale of Utopia. Shakespeare's contemporary, Christopher Marlowe (1564–1593), produced his best dramas between 1587 and his death in 1593. Marlowe's triumphs include Tamburlaine the Great and Doctor Faustus. In Spain, Miguel de Cervantes (1547–1616), particularly remembered for his prose, produced a body of work that includes Don Quixote de la Mancha. He is widely considered the greatest Spanish author. His contemporary, Lope Félix de Vega Carpio (1562–1635), commonly known as Lope de Vega, produced approximately eighteen hundred comedies during his career. De Vega's body of work totals more than 133,000 handwritten pages. Best remembered for providing the Spanish theater with a broad range and scope, he was quite beloved in Spain by the time of his death in 1635.

Elizabeth died in 1603 and was immediately succeeded by James VI of Scotland (1566–1625), who became known as James I of England. James, like Elizabeth, was a patron of the arts. Theater changed substantially during his reign. Whereas Elizabeth had favored Marlowe and Shakespeare, James and his queen, Anne of Denmark (1574–1619), preferred elaborately staged masques. Ben Jonson (1572–1637), author of a number of comedies and satires between 1605 and 1618, was a favorite of James's court. Queen Anne herself often took the stage, a precursor to the first public appearance of a female actor on stage in England by a French performance troupe in 1629. James died in 1625 and was succeeded by his son, Charles I (1600–1649).

Between 1620 and 1640, Charles created an environment of chaos and rebellion in England and Scotland. By 1642 a civil war between the monarchy and Parliament erupted, with the Puritans gaining control of the country for some time. In 1622 there were four primary theatrical companies active in London, but by 1635 there were only three. In 1642 the theaters were closed completely. Further regulations in 1647 and 1648 condemned actors and fined anyone who attended a play. Theater resumed on a small scale by the mid-1650s, and new theaters opened during the Restoration in 1660. Theater and literature in post-Restoration England took a decidedly religious turn with works like John Milton's (1608–1674) epic biblical poem, Paradise Lost, in 1667.

But the memory of the Globe Theater and its significance to world literature was not quelled by the Puritans. In 1997, a new Globe Theater, built to replicate as closely as possible the original, opened with a performance of Shakespeare's Henry V.

Montrose, Louis. The Purpose of Playing: Shakespeare and the Cultural Politics of the Elizabethan Theatre. Chicago: University of Chicago, 1996.