Introduction: Afternoons at the Globe Theatre

Introduction: Afternoons at the Globe Theatre

Playwright and poet William Shakespeare's England was a land of contrasts: The wealthiest people lived in grand countryside estates or luxurious mansions in London's most fashionable neighborhoods, found in the western half of the city. They dined on fine meats and sipped expensive wines. They employed servants. Their clothes reflected their wealth: Women wore colorful hand-sewn gowns made of expensive fabrics; men wore frilly high-collared shirts, hats decorated with feathers, and tightly tailored trousers known as canions. The wealthiest aristocrats were likely to serve in Parliament, where they enacted laws and advised the queen.

The poorest denizens of Shakespeare's England lived much different lives. In the country they lived on farms in modest dwellings with thatched roofs and dirt floors. Whole families shared these tiny cottages. In the London of the sixteenth and seventeenth centuries, poor people resided in cramped quarters on the western side of the city. If they were able-bodied, they may have lived and worked in London's workhouses, often sponsored by neighborhood churches, where they earned meager wages making cloth. Others lived on the streets, making their way through life as beggars or thieves.

workhouses
Places of employment and residency, usually sponsored by local churches, in which people were provided jobs, small incomes, and modest lodgings.

Regardless of whether an Englishman or Englishwoman was rich or poor, at three o'clock on a summer afternoon many could be found at London's Globe Theatre, where Shakespeare's plays were performed. The Page 9  |  Top of Articleoctagon-shaped theater, which produced its first play in 1598, could accommodate as many as three thousand spectators. The Globe was an outdoor theater. Those who could afford seats sat in the shade under thatched awnings. Those who could not—spectators known as groundlings—paid 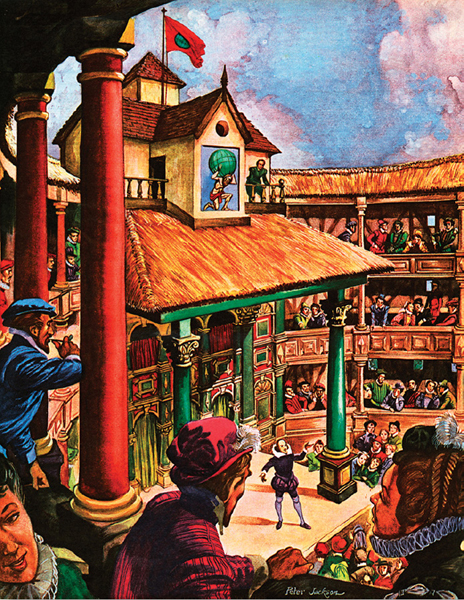 In this artist's rendering, Shakespeare performs at the Globe Theatre. The open-air Globe could hold as many as three thousand people during a performance.

a mere penny for admission; they stood below the stage in a dusty central area. It was not unusual for the groundlings to be more concerned with their card games and gambling than with the story unfolding on the stage. On the hottest of summer days—perhaps on a day when a much-anticipated Shakespearean play premiered—the unwashed groundlings packed shoulder-to-shoulder below the stage were known to those in the seats as stinkards. Wrote Stephen Gosson, an aristocrat, poet, and essayist of the era, “In our assemblies at plays in London, you shall see such heaving and shoving, such itching and shouldering … [women take] such care in their garments that they be not trod on … such pillows to their backs, that they take no hurt … such toying, such smiling, such winking … that it is a right comedy to mark their behavior.”1

groundlings
Theater attendees who paid the minimum price for admission; they stood in open central areas of the Globe and other theaters.

Whether they sat among the aristocrats under the thatched awnings, or stood among the stinkards, theatergoers were treated to the work of a writer regarded as history's finest dramatist. During his lifetime, from 1564 to 1616, Shakespeare authored thirty-eight plays as well as many other works, particularly his poetic sonnets. His plays fall into three categories: tragedies, comedies, and histories. As their descriptions suggest, Shakespeare's tragedies invariably ended sadly in the deaths of the main characters, often falling victim to their own misdeeds. On the other hand, the comedies were sheer fun, packed with irony, misunderstandings, pompous characters, and slapstick. Moreover, Shakespeare populated his stage with many fantastical characters: witches, ghosts, fairies, and others from the supernatural world. Comparing a Shakespearean play to the art of fine sailing, the seventeenth-century English historian Thomas Fuller wrote, “Shakespeare … could turn with all the tides, tack about, and take advantage of all winds by the quickness of his wit and invention.”2

In his day Shakespeare's plays were performed by England's finest actors—among them Richard Burbage, Robert Armin, Nathan Field, Edward Alleyn, and William Kemp. Women would not take the stage in England until 1660—until then the profession of acting was regarded as unladylike. Therefore, during Shakespeare's lifetime the parts of female characters were often played by teenage boys. Shakespeare himself occasionally played roles in the Globe's productions—he is believed to have taken on the role of the ghost in the tragedy Hamlet.

Shakespeare's plays were a significant element of the culture of England in the late sixteenth and early seventeenth centuries. Those years are known as the Elizabethan era, so named for Queen Elizabeth I, who ruled during much of Shakespeare's lifetime. It was Elizabeth, an enormously popular monarch, who guided England through prosperous times, made her country into a great maritime and military power, and influenced the culture of her nation. Elizabeth created the type of environment in which her talented subjects, Shakespeare foremost among them, could let their creativity flourish, spreading the culture of England beyond British shores and eventually to the New World.