Saartje Baartman was a Khoikhoi woman who was exhibited in nineteenth-century Europe as the Hottentot Venus. Her first name is variously spelled as Saartje (pronounced Sahr-kee) and Saartjie, the diminutive form of Sara or Sarah; her last name is spelled alternately as Baartman, Bartman, Bartmann, and Baartmen. “Hottentot” referred to the then-current name for Khoi people and “Venus” to the ancient Roman goddess of love. As the Hottentot Venus, Baartman was exhibited for five years so that audiences could view her steatopygia, or protruding buttocks, and elongated labia, both characteristic of Khoisan women.

As Europeans increasingly defined themselves biologically, Baartman's sexualized body was the antithesis of the normative form. The nineteenth-century interest in her as a grotesque counterexample to the idealized European body constructed a new discourse in which Hottentot women's biological difference, defined by the lower parts of their bodies, warranted a new racial type. For this reason, scholars have used Baartman's narrative to examine nineteenth-century race and gender discourses, as well as their relationship with early scientific practices.

Details regarding Baartman's early life are scant. With all credible sources considered, we can only be certain that a woman who came to be known as Saartje Baartman was born before 1790 near the Gamtoos River in the Eastern Cape of South Africa to a Khoisan family. She was orphaned and later moved near Cape Town, where she was a slave to a family of Dutch farmers and had two or three illegitimate offspring, who may have died. In 1810, when Hendrick Cezar, her slave owner's brother, and Dr. Alexander Dunlop met Baartman, they convinced her to return with them to London, where she could earn money exhibiting her unusual body.

Baartman arrived in London in 1810. At her shows, she went on stage with a keeper who led her around, having her walk, stand, sit, or squat so that working-class Londoners could view her steatopygia and large vulva from multiple angles. Aristocrats, equally interested in Baartman's features but unlikely to visit these venues, would hold private exhibitions. While newspaper accounts and drawings suggest that she wore a tight-fitting garment during exhibitions, Baartman's walking and squatting ensured that her buttocks and vulva were in constant view.

The same year, the abolitionist African Association petitioned for Baartman's release, claiming that she was exhibited against her will. On October 12, 1810, the Morning Chronicle published a letter likening her conditions to slavery. Cezar responded by arguing that Baartman was free and had the right to profit from her own exhibition. However, the abolitionists' efforts forced Cezar and Dunlop into court, and, on November 24, 1810, the attorney-general brought a case seeking Baartman's freedom and repatriation. His affidavits claimed that Cezar and Dunlop kept Baartman as a slave, forcing her to work in degrading conditions. During the hearing, Baartman, who was questioned in Dutch, assured the court that her work was voluntary and that she was guaranteed half of all profits. The circumstances of this Page 206  |  Top of Articletestimony are suspect, as is the contract produced by Cezar, which documented the agreement guaranteeing her profits. Although there is no evidence that Baartman had signed, or even seen, the agreement, it was sufficient to secure a judgment in the men's favor.

After successful showings in England, Baartman moved to Paris in September 1814, where she was perhaps sold to, and was exhibited by, the animal trainer S. Réaux. Her French exhibition lasted fifteen months, during which Baartman was exhibited in a shed for eleven hours a day. In March 1815, Georges Cuvier, professor at the Muséum National d'Histoire Naturelle and, famously, Napoleon's surgeon, invited Baartman to model for scientific paintings; his interest is, arguably, the propelling force behind Baartman's contemporary fame.

Her final months are unclear, though there is evidence that, after losing popularity, Baartman began to drink heavily and work as a prostitute. She died on December 29, 1815; speculation as to the cause of death ranges from smallpox to syphilis, pneumonia, and tuberculosis. Cuvier moved quickly upon news of her death, securing police permission to take custody of her body. After dissecting her cadaver and brain, he produced plaster casts of her body, created wax molds of her genitals and buttocks, and preserved her brain and labia. His autopsy reports, cited by scientists throughout the nineteenth century, offered dynamic data for the developing racial sciences.

Cuvier's Muséum National d'Histoire Naturelle exhibited Baartman's body, alongside other anatomical curiosities, from 1815 to 1937, when the artifacts were moved to the anthropological collections at the new Musée de l'Homme. There, Baartman's cast and skeleton were placed in profile, continuing the emphasis on her steatopygia while ignoring the ethnic distinctness of this feature, adapting her exhibition to contemporary racial discourses that categorized her as black. Her body was displayed until 1974, when most of the artifacts were put into storage.

Baartman fell from view until Stephen Jay Gould's essay “The Hottentot Venus” (1985) ignited calls for the return of her remains to the Cape. However, it was not until 1994, when South Africans elected their first post-apartheid president, that Nelson Mandela began formal efforts to reclaim Baartman's remains. The French government's reluctance stemmed mainly from the feared consequence of this repatriation for future efforts to reclaim ill-gained artifacts. Debate on the issue came to a close only with French legal analysts' assurance that their wording prevented the application of this case to future such efforts. On March 6, 2002, eight years after Mandela's request to French president François Mitterrand, the French National Assembly acceded. A box containing 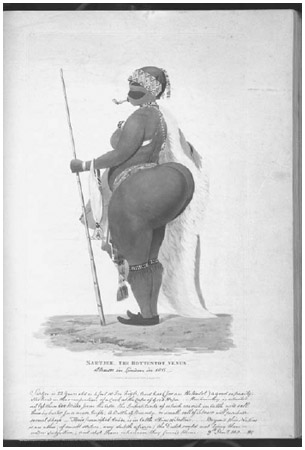 Illustration and Description of Saartje Baartman, 1811. “Hottentot Venus” was the label given to a series of women who were exhibited in sexually suggestive ethnic curiosity shows in England and France in the early nineteenth century. South African native Saartje Baartman was the first to assume the role. GEORGE ARENTS COLLECTION, THE NEW YORK PUBLIC LIBRARY, ASTOR, LENOX AND TILDEN FOUNDATIONS.

Baartman's remains was repatriated to the Gamtoos Valley on May 6, 2002, and buried in Hankey, South Africa, on National Women's Day, August 9, 2002. Khoisan writer Diana Ferrus's poem, “I've Come to Take You Home,” an anthem during the reclamation efforts, appears on a sign that stands alongside Baartman's gravesite.

There are multiple agendas behind the enthusiasm to retrieve Baartman's remains, the most basic of which was her utility as an icon of South African suffering. A richenough biography exists to individualize Baartman without the complication of first-person statements, the absence of which renders her a convenient mouthpiece for postimperial identity formation. Several indigenous groups fought to claim her remains, and thus the right to speak for her, during broader aboriginal efforts to assert land rights and demand cultural recognition. Only after lengthy intergroup Page 207  |  Top of Articlewrangling did the government settle on Hankey, perhaps for its economic potential as a tourist destination. Even in South Africa, Baartman's body became an instrument of political and economic interests.

Contemporary artists have brought their own agendas to the Hottentot Venus's enigmatic biography and its meaning for discourses of race, gender, sexuality, imperialism, and science. Elizabeth Alexander's The Hottentot Venus (1990), a book-length narrative poem in Baartman's and Cuvier's voices, is one of the few attempts to represent her as speaker. Suzan-Lori Parks's play Venus (1996) is a fictional account of Baartman's experiences in a London freak show. The photographer Lyle Ashton Harris, in Venus Hottentot 2000, portrays a black woman mimicking Baartman's profile by modeling futuristic metallic breasts and buttocks, reflecting ambivalence toward contemporary representations of black female sexuality. These are but a few examples of the artistic media constructed around the Hottentot Venus, most of which, for better or worse, join existing political narratives and displace Saartje Baartman the woman to access the cultural power of Hottentot Venus the icon.