Beginning in 1788 British colonization drastically diminished the indigenous or Aboriginal population of Australia. Precise enumeration of the decline is impossible. Estimates of the precolonial population range from 300,000 to 750,000 and statistics for the colonial period are unreliable, but the indigenous population probably reached its nadir, at around 75,000, in the 1920s. Disease, compounded by destitution, malnutrition, alcohol, and other drugs, accounted for most deaths. The numbers deliberately killed by colonists are disputed, although 20,000 is a plausible estimate. The uncertainties of body counts notwithstanding, it was by force and the threat of force that the lands of Australia passed from indigenous to European hands.

Early colonial governments sought to assimilate the Aborigines into British civilization. By the 1820s this ambition gave way to the belief that it was not possible to civilize Aborigines and they were thereby doomed to extinction. This racist assumption underpinned the protectionist legislation that was first enacted in Victoria in 1869 and subsequently in all other mainland colonies (states after 1901). Only full-blood Aborigines, however, were expected to die out; those of mixed descent were encouraged, even forced, to integrate into white society. Such ideas guided Aboriginal policy well into the 1930s. After World War II policy shifted toward the assimilation of all indigenous people, regardless of the degree of white descent, although much of the earlier protectionist apparatus, including restrictions on civil rights, remained in place until the 1960s. A consistent assumption throughout these changing policies was that indigenous peoples were too incompetent to realize their own best interests.

Indigenous peoples' varied responses to colonization belie that assumption. During the frontier period they not only fought against the invaders, but also forged alliances with them for motives both pragmatic and strategic. In the second half of the nineteenth century many Aborigines in southern Australia established themselves as self-sufficient farmers. Others, especially in the north, became skilled workers in the pastoral and pearling industries. Indigenous peoples responded creatively to changing circumstances, adopting and adapting elements of Western culture while simultaneously preserving much of their own heritage. Out of shared experiences of colonization, and to more effectively assert their interests, Aboriginal people fashioned a pan-Aboriginal identity and solidarity that surpassed (without completely displacing) traditional affinities to kin and language group. The growth of pan-Aboriginality was largely a phenomenon of the second half of the twentieth century. Alongside it the peoples of the Torres Strait Islands fashioned their own distinctive collective identity.

Allegations that Australia has a genocidal past have provoked fierce disputes, with the public dichotomy Page 103  |  Top of Article often being a clash between assertions of the intrinsically genocidal nature of colonization and flat denials of the possibility of genocide having been committed on the continent. Scholarship on Australian genocide has moved beyond such stark polarities. In an influential article published in 2000, Dirk Moses argued that although Australian history since 1788 is not ubiquitously genocidal, it has been punctuated by "genocidal moments." No consensus is emerging on the questions of whether, where, or when genocide was committed in Australia, but the debate has promoted public awareness of historical injustices to indigenous people, and encouraged a more internationally comparative approach to the study of Australian race relations.

In Tasmania a decade of violent conflict culminated in 1830 in a military sweep through the center of the island, followed by the deportation of the survivors to the islands of Bass Strait where the last full-blood Tasmanian Aborigine, Truganini, died in 1876. Although this is widely cited as an instance of genocide, Australia's leading historian of frontier conflict, Henry Reynolds, disagrees. He points out that while numerous Tasmanian settlers urged the extermination of the Aborigines, this was not the intent of the colonial government, which sought to segregate them from belligerent settlers and thereby ensure their survival. Similarly, on mainland Australia the disjunctions between intentions and consequences, together with the difficulty of discriminating between forcible subjugation and attempted eradication, complicate attempts to judge the actions of colonial governments as genocidal.

In 1997 the Human Rights and Equal Opportunities Commission (HREOC) report on the forcible separation of indigenous children from their families propelled the Stolen Generations into public prominence and frequently into bitter controversy. HREOC's claim that the removal of indigenous children throughout the period 1900 to 1970 was genocidal in intention has been criticized on several grounds, notably its presumption of consistent administrative intentions over a seventy-year span, and its supposition that cultural genocide (ethnocide) comes within the scope of the 1948 Genocide Convention. The number of children removed remains in dispute, although twenty to twenty-five thousand, or one in every ten indigenous children over seventy years, is a widely cited estimate. Whatever the numbers, and regardless of administrative intentions, the consequences of forced removal were traumatic, often tragic, both for the separated children and for the grieving family members and communities left behind. 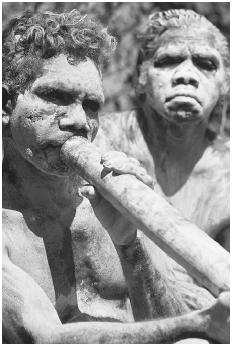 The number of violent deaths of Aborigines at the hands of white colonizers is much contested and the subject of intense political debate. The figure is perhaps as high as 20,000. In this photo from 1976, an Aboriginal man, wearing traditional body paint, plays the didgeridoo—an Australian musical instrument that has been in use for thousands of years. [PENNY TWEEDIE/CORBIS]

Into the Twenty-First Century

When, in 1998, prime minister John Howard refused to offer an official apology to the Stolen Generations, concerned citizens instituted a national Sorry Day on May 26 to allow the Australian public an opportunity to convey their own collective apology. Although annual Sorry Days express contrition for the pain inflicted on indigenous peoples, they have also crystallized public disagreement over the remembrance of Australia's past. Conservative commentators have condemned Sorry Days as a manifestation of black-armband historiography, which allegedly caricatures the past as a mere litany of misdeeds inflicted on indigenous innocents. Their opponents, in turn, accuse them of a white-blindfold approach that seeks to expunge unpleasantries from the record. Such polemical labels may obscure the nuances of debate, but they highlight the political potency of historical representation.

In the last quarter of the twentieth century some indigenous groups regained ownership of their lands, a process facilitated by the 1992 Mabo judgment of the Australian High Court that determined native title, predating British sovereignty over Australia, still prevailed over much of the continent. However, many indigenous groups remain landless, and land rights have not always delivered the expected benefits. Compared to other Australian groups, indigenous people are severely disadvantaged in terms of all significant socioeconomic criteria, including income, health, housing, employment, and education; in many indigenous communities these problems are compounded by inordinately high rates of violence, suicide, alcoholism, and drug abuse. Indicative of the scale of disadvantage, in 2001 indigenous Australians had an average life expectancy almost twenty years less than that of other Australians, and the gap is not narrowing. Although some indigenous individuals have achieved success in the arts, media, sports, business, and politics, such successes have made little dent in aggregate disadvantage, and standards in certain areas, for example, literacy and health, may be deteriorating.

Since 1990 all major Australian political parties have proclaimed their commitment to a reconciliation between the indigenous population and other Australians, apparently with strong public support. What reconciliation means, however, is uncertain. Conservative interpretations tend to construe it as a strategy for attaining socioeconomic equality between indigenous and nonindigenous Australians through a common commitment to national and liberal-capitalist norms. More leftist commentators and most indigenous leaders, while equally committed to eliminating disadvantage, regard reconciliation as a process demanding the recognition of indigenous peoples as distinct groups, with special rights and entitlements. Behind the differing interpretations lie deeper disagreements over the extent and requirements of indigenous autonomy, and how sociocultural distinctiveness might be maintained in harmony with the demand for socioeconomic parity.

Manne, Robert (2001). "In Denial: The Stolen Generation and the Right."Australian Quarterly Essay 1.

Moses, A. Dirk (2000). "An Antipodean Genocide? The Origins of the Genocidal Moment in the Colonization of Australia." Journal of Genocide Research 2:89-106.