“Among the extraordinary though quite natural circumstances of my life,” wrote the 16th-century Italian Girolamo Cardano, “the first and most unusual is that I was born in this century in which the whole world became known.” The late 15th-century arrival of Europeans in the Western Hemisphere initiated a series of long-term and wide-reaching exchanges. People, animals, DISEASE, crops, commodities, and ideas flowed into new areas and in new directions. The biological and cultural exchange between the Old and New Worlds—labeled the Columbian Exchange by the historian Alfred Crosby—transformed diverse landscapes and disparate lives across the globe.

When CHRISTOPHER COLUMBUS reached American shores, he found a land that lacked the principal crops of the Old World, such as WHEAT, barley, and rye, and free of beasts of burden, such as horses and cattle. In the Americas, there were no European, Asian, or African domesticates, and conversely, in Europe, Asia, and Africa, there were no American plants or animals. The FOODS that today are often associated with countries’ so-called traditional cuisines were not found in those places before 1492. Italians ate no tomatoes and the Irish no POTATOES; Indians (from India) consumed no chilies and Ethiopians no peanuts; Argentines ate no beef and Jamaicans no chicken. Only Old World elites drank coffee and tea, while the New World nobility enjoyed TOBACCO and chocolate. 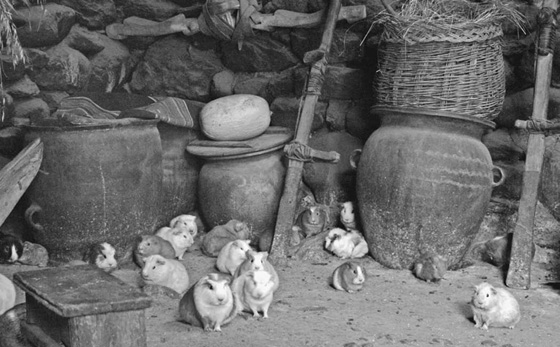 While Europeans were quick to identify the richness of the Americas, they also recognized that Old World crops, particularly geographically limited ones, such as SUGAR, could thrive in tropical environments. During his 1492 encounter with the Caribbean, Columbus collected samples of exotic and useful New World crops, including maize and cotton. During his second voyage of 1493, he and his settlers brought a wide variety of Old World plants and animals, including wheat, barley, grapes, chickpeas, olives, onions, horses, and cattle. Unbeknownst to both the Europeans and Americans, other living organisms, including bugs and diseases, also made the journey. From the Americas, a variety of syphilis arrived in the Old World. From Europe, a host of lethal pathogens, including smallpox, yellow fever, and influenza, invaded the New World. These first encounters typified important aspects of the Columbian Exchange. For one, they demonstrate that material exchanges moved both to and from the Old and New Worlds. They also illustrate that these exchanges were not always benign in nature. While the New World lacked the main Old World domesticated animals, it also lacked the pathogens of smallpox, bubonic plague, typhoid, influenza, malaria, and yellow fever, all of which stemmed from human-animal interaction. Furthermore, the exchange of goods came with important cultural components.

The Columbian Exchange did not simply involve trading valued commodities between Europe and the Americas; rather, the history of the biological and cultural exchanges during the early colonial period is a rich and truly global story. The American staples of manioc, potatoes, and maize became important global staples by the close of the 16th century. Manioc, a South American root crop also known as cassava, became an important component in West African AGRICULTURE as early as the 16th century. In 1593, for example, Sir Richard Hawkins, an important adviser to the English monarch, detailed the seizure of a Portuguese ship leaving Angola loaded with manioc. Nearly a century later, the Fulani and Hausa peoples of the kingdoms of the Kongo and Angola cultivated the crop.

Potatoes, which were once exclusively the food of Andeans, disseminated widely during the 16th century. While the Spaniards who first encountered them found them unusual, by the close of the century, potatoes were being cultivated in many parts of Europe and Asia. In 1600, the French botanist Olivier de Serres provided a detailed history of the tuber and described the crop’s cultivation in North America, England, Switzerland, Spain, and France. Similarly, Chinese accounts from late in the century identified potatoes among a collection of new foreign domesticates that also included tomatoes, peanuts, and guava.

No staple spread the globe as quickly and widely as maize. By the close of the 16th century, it was cultivated in Europe, the Middle East, Southeast Asia, Africa, and Page 83  |  Top of Articlethroughout the Americas. Leonard Rauwolf, an explorer and amateur botanist who collected seed samples from the Middle East, noted evidence of this distribution. In 1574, he found that maize was cultivated throughout the Ottoman Empire, particularly from modern-day Turkey to Jerusalem.

Sugarcane, a geographically limited Old World commodity that required tropical environs and massive labor, was a driving force behind European expansion in the Americas. Before the 16th century, sugar was almost exclusively cultivated in the East Indies and was available on the global market in only very limited amounts. Universally appealing and limited in quantity, sugar was more valuable than GOLD on the world market. By the mid-16th century, however, American sugar production dominated. In 1501, Columbus created the first sugar plantation in the New World, and in 1516, the first shipment of New World sugar arrived in Europe. The story of sugar production, however, was not a sweet tale. Rather, the rise of sugar was fundamentally linked to the rise of New World SLAVERY and the decline of indigenous peoples in the Caribbean and BRAZIL. On the island of HISPANIOLA (present-day Dominican Republic and Haiti), by 1600, the native population was nearly extinguished under the disastrous combination of labor exploitation and disease. In the absence of indigenous labor, Europeans imported massive numbers of enslaved Africans. By 1600, for example, some 15,000 African slaves were working on Brazil’s 150 sugar plantations. In the century that followed, the number of African slaves increased tenfold.

Europeans took domesticated animals into the areas to which they moved. Early European voyagers introduced horses, cattle, pigs, chickens, and sheep, but the arrival of these animals did not come without costs. Sheep, for example, extracted a considerable toll on the physical landscape and so, also, the human landscape. In valleys north of present-day MEXICO CITY, widespread sheep production transformed the forest and farmland of the 1530s into the unfertile prairies of the 1560s. The native inhabitants of the areas, who subsisted mainly on slash-and-burn horticulture, were no longer able to feed themselves. As a result, more than 90 percent of the population was extinguished.

The demographic shifts associated with the Columbian Exchange were monumental. During the 16th century, Europe’s population increased by nearly 20 percent and Asian populations by nearly 10 percent due to the new sources of food and wealth. The Americas, on the other hand, suffered the worst demographic collapse in human history. One of the most important biological exchanges between the Old and New Worlds took place at the microscopic level. From the first decades of contact with Europeans, smallpox, typhus, influenza, and measles inundated susceptible American populations. The rapid spread of Old World diseases, described by scholars as “virgin-soil epidemics,” affected entire communities, from the young to the old, the weak to the fit. Combined with European abuse and exploitation, Old World diseases disabled every indigenous group they touched.

The first recorded account of epidemic smallpox in the New World comes from the coast of MEXICO in 1517. By 1520, the disease had spread to the densely populated Valley of Mexico. In 1526, ahead of the Europeans themselves, the disease spread into Central America. By the end of the 16th century, the native population of Mexico City had been reduced to no more than 30 percent of its precontact strength. The 16th-century historian and polemicist BARTOLOMÉ DE LAS CASAS reported that the 6 million pre-Hispanic indigenous inhabitants of Hispaniola had been reduced to 30,000 by the 1550s.

While estimates of the Amerindian population before the arrival of Europeans vary considerably, it is likely that it was as high as 60 million. There is little scholarly debate on the significance of the rapid decline of native populations across the hemisphere, however. By the close of the 16th century, fewer than 10 million native inhabitants lived in the Americas. After a century of the Columbian Exchange, the human makeup of the Americas had changed dramatically. The populations of the Caribbean had virtually disappeared. Major population centers such as those in the Valley of Mexico and the Andes were exponentially reduced. Even in frontier areas, such as the AMAZON Basin, where Europeans rarely ventured, native populations fell victim to Old World diseases. Given the overwhelming decline of indigenous peoples, virtually everyone in the New World was directly affected by the Columbian Exchange.

The exchange of crops and commodities was accompanied by the exchange of cultural components such as ideas and institutions. The creation of sugar plantations, for example, came with the exploitive labor practice of slavery. During the 16th century, Europeans created the foundations for subsequent labor practices, particularly the transatlantic slave trade. With the dramatic decline in native labor, Europeans imported African slaves. Across this period an estimated 350,000 slaves were shipped to the Americas, with the vast majority winding up on Caribbean and Brazilian sugar plantations.

European cultural and ideological systems often served to justify the cruel and exploitive aspects of the Columbian Exchange. Early modern European political systems struggled to consolidate wealth and authority. Expansion into the Americas, hastened by debilitated local populations, provided new opportunities for Europeans to bolster their regional and global positions. While it is true that Europeans often lamented the abuse of Americans and Africans, this exploitation was justified and even bolstered by Old World, and particularly European, philosophical and religious traditions. For Page 84  |  Top of Articleexample, by citing classical philosophy, religious interpretations, and medieval political thought, European monarchs defended the destruction of indigenous societies and the enslavement of Africans as aspects of a “just war” in the name of society and civilization.

After only a century, the Columbian Exchange had transformed the biological and cultural character of people around the world, and the effects were both uneven and complex. On the one hand, the introduction of valuable new sources of food fed population explosions in Europe and Asia. Europe, once a somewhat unimportant and fractured region of the Old World, found itself a controlling force in a global system of TRADE and exploitation. On the other hand, the introduction of Old World diseases and colonial systems of exploitation led to the demographic collapse, the most significant in human history, of indigenous Americans. The New World, once a chain of independent economic and social systems, became a colonized and subjugated source for the world’s wealth. Furthermore, the exploitive social and economic systems that formed during the earliest parts of the Columbian Exchange were limiting and lasting forces.