Uranium is a chemical element that is used to create nuclear power and nuclear weapons. It is radioactive, meaning that it gives off energy in the form of tiny particles. Scientists use symbols to stand for the chemical elements. The symbol for uranium is U. 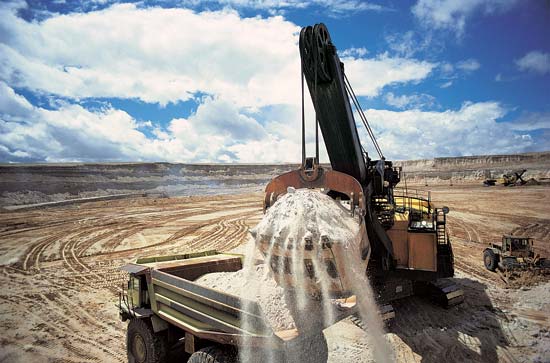 Rocky material that contains uranium is loaded into a dump truck at a mine in the U.S. state of Wyoming. Digital Vision/Thinkstock

Where Uranium Is Found

Uranium is found in many places throughout Earth. Canada, Australia, and Kazakhstan, in particular, have large deposits of the element.

Uranium is a dense, hard metallic element that is silvery-white in color. In air the metal tarnishes. When it is divided into very small sections it breaks into flames. Like many metals it can be formed into many shapes. Unlike most metals, however, it does not conduct electricity well.

In the late 1930s scientists discovered that uranium gives off a huge amount of energy when the nucleus, or center, of its atom is split in two. An atom is the smallest unit of an element. At the center of the atom is the nucleus, which consists of particles called neutrons and protons. In a process called nuclear fission the nucleus of an atom breaks up into two lighter nuclei.

Fission can happen naturally or it can be created. Scientists have discovered that they can cause fission by hitting the uranium nucleus with neutrons or other particles or with a type of radiation called gamma rays. As a result of fission, a large amount of energy is released, radioactive products are formed, and several neutrons are emitted. These neutrons can then cause fission in another nearby nucleus. That will in turn release more neutrons that can repeat the sequence. This leads to a chain reaction in which a large number of nuclei undergo fission and an enormous amount of energy is released. This process can be controlled and used to provide power to create electricity. It can also cause great destruction when it is allowed to happen in an uncontrolled way in an atomic bomb.