Professional football players are often celebrated for their ability to hit, block, and tackle their opponents on the field.

In recent years, several athletes in the National Football League (NFL) have suffered injuries that could have resulted in paralysis or death. Such stars as Troy Aikman, Michael Irvin, and Steve Young were forced to retire after repeated hits resulted in serious concussions or spinal injuries.

This season, Pittsburgh Steelers quarterback Tommy Maddox suffered a severe concussion and a bruised spine during a game. Knocked unconscious, Maddox had to be taken by ambulance to a local hospital. 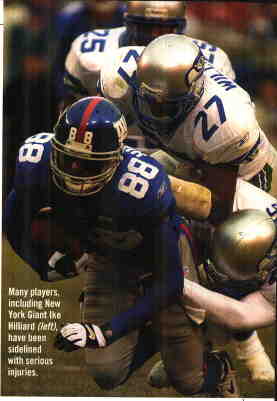 Such injuries, critics argue, prove that the NFL is not doing enough to protect its players. What do you think? Is pro football too violent?

Any hit or tackle that leaves a player seriously injured is a form of violence. The NFL should ban certain hits, such as helmet-first tackles, that often cause concussions or career-ending injuries. Fans love the brutal action of a football game, but protecting players is more important.

"I think pro football is really violent," says Sean Pritchardthorpe, a seventh-grader at Mansfield Middle School in Mansfield, Connecticut. "Players like getting attention for hurting others and hitting hard, especially during the Super Bowl. I think the NFL should change its rules and stop players from getting hurt." 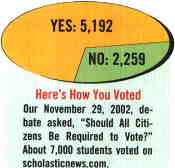 Rules on how a player NO can hit and tackle another player would be impossible to enforce. For example, a player might be penalized, fined, or suspended for a clean hit that causes injury. Hard hits are part of the game, and pro football players are tough enough to take them.