The term groundwater sounds as if it refers to an underground lake or river, but relatively little groundwater is found in this form. Groundwater lies below the surface of the land; in fact, it is almost everywhere underground. Mostly it is found in the tiny pores, or spaces, between rocks and particles of soil and in the cracks of larger rocks.

Where does groundwater come from? When rain falls, some of it flows along the surface of the ground into streams and lakes as runoff. Some of the rain evaporates into the atmosphere, some is taken up by plant roots, and some seeps into the ground to become groundwater. 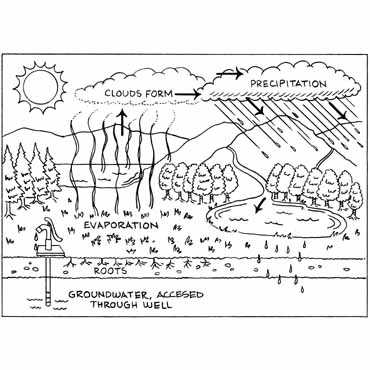 Underground areas called aquifers collect much of this groundwater. An aquifer is composed of permeable rock, loose material that holds water. Permeable means "having pores that permit a liquid or a gas to pass through." You might think of a groundwater aquifer as a big sponge that soaks up the rain that seeps below the surface. 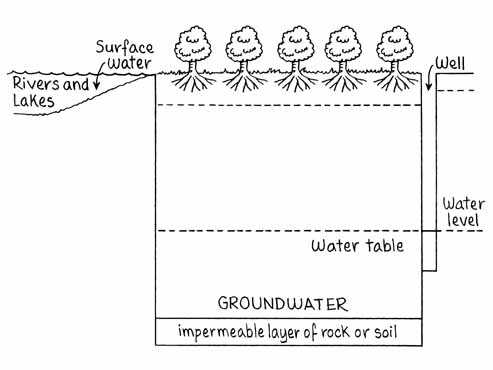 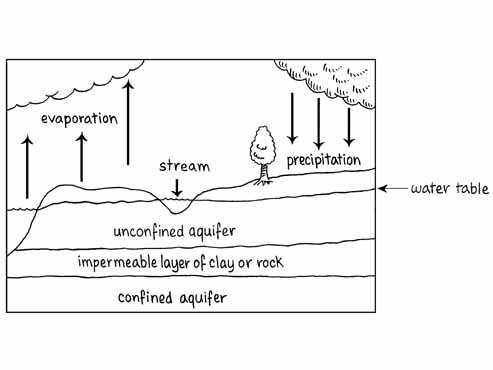 How big is an aquifer?

The size of an aquifer depends on the amount of rainfall and the composition of the underground rock and soil. The world's largest aquifer is in the United States. Called the Ogallala, it spreads under eight western states, from South Dakota to Texas. The Ogallala formed millions of years ago and is still supplying water to cities, businesses, and farms. Unfortunately, people are using water from the Ogallala faster than it can be naturally replenished, and the water table is falling. 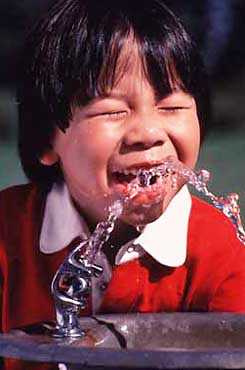 Our most precious resource?

Water is a natural but limited resource. Most of the water on Earth is saltwater; 97% of the world's water supply is located in the oceans. That means that only 3% is freshwater, and two-thirds of that is frozen in the polar icecaps, icebergs, and glaciers. Only the remaining 1% is groundwater or surface water in lakes, ponds, and streams.

Today, about three-quarters of the cities in the United States depend on groundwater for part or all of their drinking water. Wells also withdraw groundwater to irrigate crops, keep golf courses green, and meet other recreational needs. 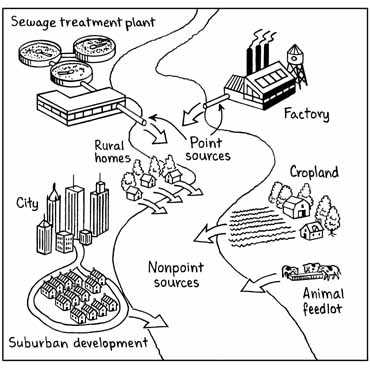 Contamination is another problem. Leaking underground storage tanks may seep petroleum products into groundwater. Inadequate septic systems, sewage treatment plants, fertilizer runoff from farms, salt runoff from highways, and chemicals discharged from factories are other sources of pollution that can make groundwater unsuitable for humans to drink or use. 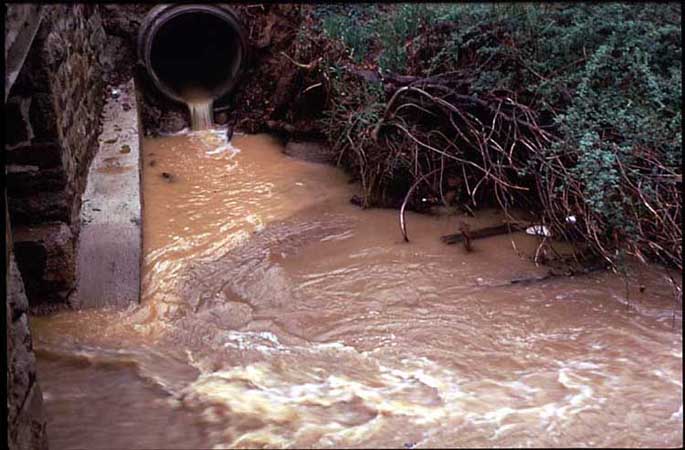 Wetlands provide homes for waterfowl and many other animal species. Low-lying wetlands may receive water from an aquifer. If the water is contaminated, it will pollute the wetlands, affecting all the wildlife that depends on these water habitats.

As the human population continues to grow, the demand for fresh, clean water supplies grows too. Careful management and use are essential to maintain the quality of our groundwater and surface water. The following projects will help you understand how aquifers can become contaminated and how dirty water can be cleaned.

Aeration
Mixing a gas, like oxygen, with a liquid, like water.
Aquifer
Underground layer of sand, gravel, or spongy rock that collects water.
Artesian well
A well in which water is forced out under pressure.
Coagulation
A process during which solid particles in a liquid begin to stick together.
Confined aquifer
An aquifer with a layer of impermeable rock above it where the water is held under pressure.
Disinfection
Using chemicals to kill harmful organisms.
Filtration
Removing impurities from a liquid with a filter.
Groundwater
Water that soaks into the ground and is stored in the small spaces between the rocks and soil.
Impermeable
Not allowing substances to pass through.
Impurities
Chemicals or other pollutants in water.
Nonpoint source
An unidentified source of pollution, which may actually be a number of sources.
Percolate
To pass through a permeable substance.
Permeable
Having pores that permit a liquid or a gas to pass through.
Point source
An identified source of pollution.
Pore
An opening or space.
Runoff
Water that does not soak into the ground or evaporate, but flows across the surface of the ground.
Sedimentation
A process during which gravity pulls particles out of a liquid.
Surface water
Water in lakes, rivers, ponds, and streams.
Unconfined aquifer
An aquifer under a layer of permeable rock and soil.
Variable
Something that can affect the results of an experiment.
Water table
The level of the upper surface of groundwater.
Wetlands
Areas that are wet or covered with water for at least part of the year.

Aquifers: How do they become polluted?

Many communities and homeowners must rely on wells that pump groundwater from aquifers. Unfortunately, groundwater can be contaminated by improper use or disposal of harmful chemicals, such as lawn fertilizers and household cleaners. These chemicals can percolate down through the soil and rock into an aquifer and eventually be drawn into the wells. Such contamination can pose a significant threat to human health.

In this project, you will build a model that shows how water is stored in an aquifer, how groundwater can become contaminated, and how this contamination can end up in a well. You will see that what happens above ground can affect the aquifers below ground--and the drinking water.

Moderate, because of the time involved.

How to Experiment Safely

Do not drink the water you are using in this project. 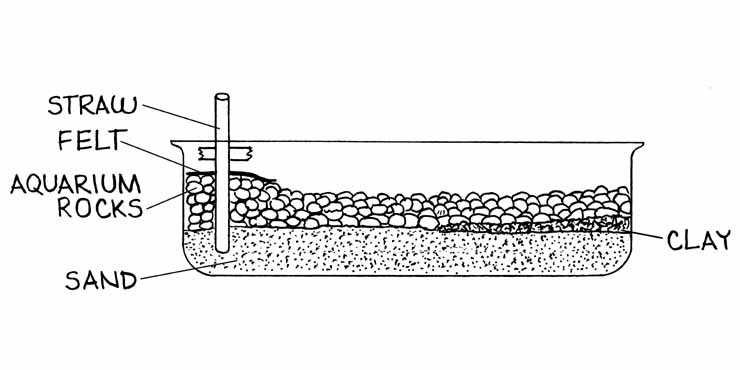 From your model, you can easily see how pollution spread into the surface water and the aquifer, contaminating the water supply. Write a paragraph about what you observed.

Here is a problem that might arise, a possible cause, and a way to remedy the problem.

Problem: The straw is clogged with sand.

Groundwater: How can it be cleaned?

Surface water--water in lakes, rivers, and wetlands--often contains impurities that make it look and smell bad. It may also contain bacteria and other organisms that can cause disease. Consequently, this water must be "cleaned" before it can be used. Water treatment plants typically clean water by taking it through these processes:

This project will demonstrate the procedures that municipal water plants use to purify water. It's important to maintain a clean water supply, as this water often affects the quality of the groundwater used by people who depend on wells.

How to Experiment Safely

Do not drink the water you are using in this project. Be careful using the scissors when you cut the tops and bottoms off the soda bottles. 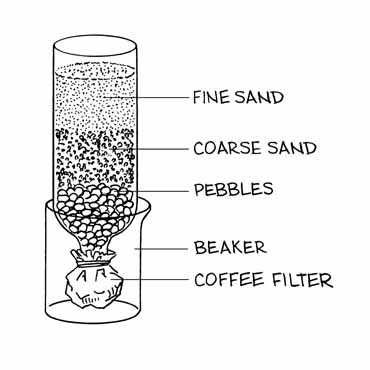 Note: The final step in water treatment is disinfection by adding chemicals to kill any harmful organisms. Because disinfectants must be handled carefully, this process is not included here. Do remember that the water you have treated is NOT safe to drink.

Write a report of your observations of the smell and look of the water before and after treatment. Include the amount of time that it took for the sediments to form.

Here is a problem that might arise during this project, a possible cause, and a way to remedy the problem.

Problem: During sedimentation, the sediments mixed into the water that was being filtered.

Possible cause: You might have poured the swamp water too quickly. Pour the contaminated water back into the sedimentation bottle and let it sit undisturbed again. Or pour it through the coffee filter and see if the sediment makes the water flow more slowly. The filter may not take all the sediment out, or it may become clogged with sediment, one of the many problems that occur during the actual water treatment process.

Design Your Own Experiment

How to Select a Topic Relating to this Concept

Check the Further Readings section and talk with your science teacher or school or community media specialist to start gathering information on groundwater questions that interest you. As you consider possible experiments, be sure to discuss them with a knowledgeable adult before trying them.

Steps in the Scientific Method

To do an original experiment, you need to plan carefully and think things through. Otherwise, you might not be sure what question you are answering, what you are or should be measuring, or what your findings prove or disprove.

Here are the steps in designing an experiment:

Recording Data and Summarizing the Results

In the two groundwater projects, the results were not measurable. However, in designing your own experiment, you should decide how to record the data, how to measure much water you draw out, and how to determine how quickly the same amount of water is replenished.

You can undertake a variety of projects related to groundwater, such as finding out the source(s) of drinking water in your community and what steps are being taken to prevent contamination. You might research the kinds of contaminants found most often in your community's water and the probable sources of these contaminants. You might explore how flooding and drought each affect groundwater and its purity. If possible, compare the smell and appearance of surface water and groundwater--or water that has been treated by the city water division and water from a well. The possibilities just depend on your interests.