Fossil fuel
Fuels, including coal, petroleum, and natural gas, formed by the decomposition of dead organisms over several million years.
Seismic wave
Waves of energy that move through rock and soil during an earthquake or other sudden violent event.

People have known about oil for thousands of years. Oil naturally seeps up to Earth's surface in some areas, and people in ancient Greece and China used it for heat and light more than 2,000 years ago. The easiest way to collect oil was by skimming it off the surface of seeps, but the Chinese actually drilled into the ground for oil in the 300s, using metal bits and bamboo piping to reach deposits several hundred feet below the surface. In the 1000s Persians and Arabs used petroleum distilled into kerosene, a type of oil refined from crude oil, for oil lamps. The Italian explorer Marco Polo (1254–1324) described oil fields in what is now Azerbaijan, in which people harvested oil from deep, hand-dug pits.

People began taking more interest in oil in the mid-1800s. For the previous century most people in Europe and North America had used whale oil for lighting; this was obtained by killing right whales and boiling down their blubber. By the 1850s whales had been hunted almost to extinction in the Atlantic and were harder to find in the Pacific, so oil producers turned instead to kerosene.

Edwin Drake (1819–1880) is credited with inventing the first widely copied oil well, which he built for the Seneca Oil Company in 1858 to drill for oil in Titusville, Pennsylvania. He powered it with a steam engine and invented the use of a drive pipe, a hollow metal pipe used to stabilize the hole through which the drilling equipment could be lowered. Without the drive pipe, the hole would collapse. Drilling through bedrock was slow and difficult, and Drake managed only about 3 feet (1 meter) per day. He struck oil 70 feet (21 meters) down, and the petroleum industry was born.

The method Edwin Drake used to drill oil wells is called cable-tool or percussion drilling. A hole is punched into the ground by a heavy cutting tool called a bit that is attached to a cable and pulley system. The cable hangs from the top of a four-legged framework tower called a derrick. The cable raises and drops the drill bit over and over again, shattering the rock into small pieces, or cuttings. Periodically, those cuttings have to be wetted down and bailed out of the hole. Although this method is sometimes still used for drilling shallow wells through hard rock, almost all present-day wells are bored by rotary drilling equipment, which works like a corkscrew or carpenter's drill.

In rotary drilling, a large heavy bit is attached to a length of hollow drill pipe. As the well gets deeper, additional sections of pipe are connected at the top of the hole. The taller the derrick, the longer the sections of drill pipe that can be strung together. Although early derricks were made of wood, modern derricks are constructed of high-strength steel.

The whole length of pipe, or drillstring, is twisted by a rotating turntable that sits on the floor of the derrick. When the drill bit becomes worn or when a different type of drill bit is needed, the whole drillstring must be pulled out of the hole to change the bit. Each piece of pipe is unscrewed and stacked on the derrick. When the oil-bearing formation is reached, the hole is lined with pipe called casing, and finally the well is completed or made ready for production with cementing material, tubing, and control valves.

Throughout the rotary drilling process, a stream of fluid called drilling mud is continuously forced to the bottom of the hole, through the bit, and back up to the surface. This special mud, which contains clay and chemicals mixed with water, lubricates the bit and keeps it from getting too hot. The drilling mud also carries rock cuttings up out of the hole, clearing the way for the bit and allowing the drilling crew's geologists to study the rock to learn more about the formations underground. The mud also helps prevent cave-ins by shoring up the sides of the hole.

Offshore drilling processes and equipment are essentially the same as those on land, except that special types of rigs are used depending on water depth. Jackup rigs or oil platforms, with legs attached to the ocean floor, are used in shallow water with depths to 200 feet (60 meters). In depths up to 4,000 feet (1,200 meters), drilling takes place on semisubmersible rigs that float on air-filled legs and are anchored to the bottom. Drillships with very precise navigational instruments are used in deep water with depths to 8,000 feet (2,400 meters). Once a promising area has been identified, a huge fixed platform is constructed that can support as many as 42 offshore wells, along with living quarters for the drilling crew. 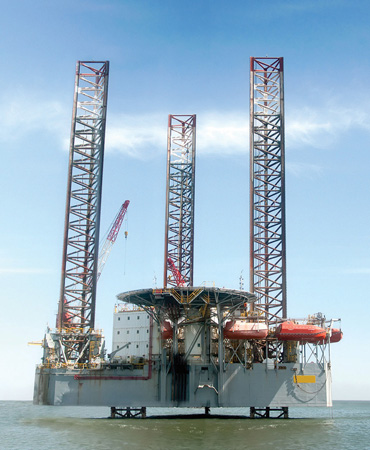 Early oil wells only went straight down. They did not have to be precisely above a deposit because oil flows underground, and it is possible to suck out a deposit covering a large area with only one well, somewhat like sticking a straw into a milkshake. Twenty-first-century wells can reach horizontally from the central vertical pipe, covering a huge area.

In 2009, the deepest oil well to that point in time was the one drilled by the offshore rig Deepwater Horizon in the Gulf of Mexico south of Houston, Texas. The well was over 35,000 feet (10,683 meters) deep. However, this well exploded on April 20, 2010, killing 11 platform workers and causing the largest oil spill and worst environmental disaster in U.S. history. By 2012 the deepest well was 40,604 feet (12,376 meters) deep. It was drilled by Exxon in the Chayvo oil field on the Sakhalin shelf in Russia.

Before an oil company can drill, it must find deposits of oil. Geologists handle this job. They know the particular features of the rock and soil that create the right conditions for an oil trap. Oil is often contained in reservoirs, underground pools many thousands of feet deep. Surface features often contain clues that oil might lie beneath.

Oil deposits can create tiny changes in Earth's gravitational field and magnetic field, so geologists can use gravity meters and magnetometers to find these. Machines called “sniffers” can “smell” oil.

Geologists also use seismology, the study of shock waves through Earth's layers. They create their own seismic waves by creating explosions or slamming the ground with heavy objects and tracing the way the waves travel through the rock. The waves change when they run into liquid or different types of rock, which can indicate the presence of oil.

Geologists spend much of their time finding deposits of shale oil, which is not contained in reservoirs but instead trapped in tiny deposits throughout the rock. This oil can be retrieved through hydraulic fracturing, or fracking.

Certain parts of the world have very high numbers of oil deposits. Oil reserves are the amount of oil that can actually be recovered by drilling. In 2012 the world's largest oil reserves were in Venezuela, Saudi Arabia, Iran, and Canada.

Drilling for oil is dangerous work. Oil can catch on fire or cause explosions, which is hazardous to the workers. Oil wells that catch on fire create massive blazes that are nearly impossible to extinguish because they have a virtually unlimited source of fuel. Accidents can also cause oil spills, which send huge amounts of oil into the environment. This is devastating to the the animals and plants that live in the area.

Oil well fires are both dangerous and expensive, because the oil that is burning is valuable and could be sold for great profit if it weren't burning up. Combating fires has been a challenge since the early days of oil drilling, in the early 1900s. Techniques for stopping fires include capping wells, drilling relief wells, blowing up the well with dynamite (this actually works), and forcing liquid nitrogen or water into the well.

Oil rig accidents have occurred with some regularity since the 1960s. The most deadly accident was at Piper Alpha platform near the United Kingdom in 1988; 167 workers died in the explosion and fire that occurred when workers used the wrong pump. The worst accident in terms of pollution was caused by the explosion on the rig Deepwater Horizon in 2010. The rig sank April 22 and left oil gushing at the seabed level?deep in the ocean. An estimated 5 million barrels (210 million U.S. gallons) of oil poured into the Gulf before the well was sealed July 15.